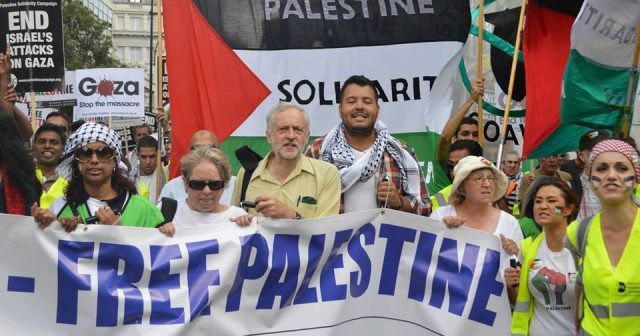 After a short reprieve following Jeremy Corbyn’s unexpected success in Britain’s general election last year, when he only narrowly lost the popular vote, most of the Labour parliamentary party are back, determined to bring him down. And once again, they are being joined by the corporate media in full battle cry.

Last week, Corbyn was a Soviet spy. This week we’re in more familiar territory, even if it has a new twist: Corbyn is not only a friend to anti-semites, it seems, but now he has been outed as a closet one himself.

In short, the Blairites in the parliamentary party are stepping up their game. Corbyn’s social justice agenda, his repudiation of neoconservative wars of aggression masquerading as “humanitarianism” – lining the coffers of the west’s military-industrial elites – is a genuine threat to those who run our societies from the shadows.

The knife of choice for the Labour backstabbers this time is a wall mural removed from East London in 2012. At that time, before he became Labour leader, Corbyn expressed support on Facebook for the artist, Kalen Ockerman, known as Mear One. Corbyn observed that a famous anti-capitalist mural by the left-wing Mexican artist Diego Rivera was similarly removed from Manhattan’s Rockefeller Centre in 1934.

Interestingly, the issue of Corbyn’s support for the mural – or at least the artist – originally flared in late 2015, when the Jewish Chronicle unearthed his Facebook post. Two things were noticeably different about the coverage then.

First, on that occasion, no one apart from the Jewish Chronicle appeared to show much interest in the issue. Its “scoop” was not followed up by the rest of the media. What is now supposedly a major scandal, one that raises questions about Corbyn’s fitness to be Labour leader, was a non-issue two years ago, when it first became known.

Second, the Jewish Chronicle, usually so ready to get exercised at the smallest possible sign of anti-semitism, wasn’t entirely convinced back in 2015 that the mural was anti-semitic. In fact, it suggested only that the mural might have “antisemitic undertones” – and attributed even that claim to Corbyn’s critics.

And rather than claiming, as the entire corporate media is now, that the mural depicted a cabal of Jewish bankers, the Chronicle then described the scene as “a group of businessmen and bankers sitting around a Monopoly-style board and counting money”. By contrast, the Guardian abandoned normal reporting conventions yesterday to state in its news – rather than comment – pages unequivocally that the mural was “obviously antisemitic”. 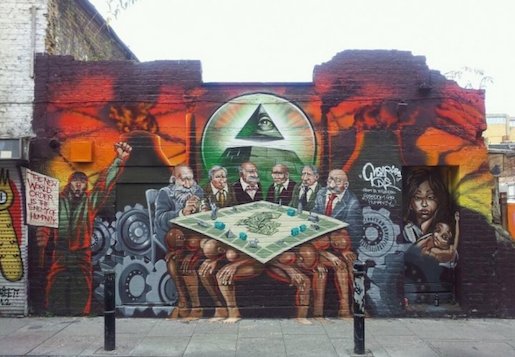 Not that anyone is listening now, but the artist himself, Kalen Ockerman, has said that the group in his mural comprised historical figures closely associated with banking. His mural, he says, was about “class and privilege”, and the figures depicted included both “Jewish and white Anglos”. The fact that he included famous bankers like the Rothschilds (Jewish) and the Rockefellers (not Jewish) does not, on the face of it, seem to confirm anti-semitism. They are simply the most prominent of the banking dynasties most people, myself included, could name. These families are about as closely identified with capitalism as it is possible to be.

There is an argument to be had about the responsibilities of artists – even street artists – to be careful in their visual representations. But Ockerman’s message was not a subtle or nuanced one. He was depicting class war, the war the capitalist class wages every day on the weak and poor. If Ockerman’s message is inflammatory, it is much less so than the reality of how our societies have been built on the backs and the suffering of the majority.

Corbyn has bowed to his critics – a mix of the Blairites within his party and Israel’s cheerleaders – and apologised for offering support to Ockerman, just as he has caved in to pressure each time the anti-semitism card has been played against him.

This may look like wise, or safe, politics to his advisers. But these critics have only two possible outcomes that will satisfy them. Either Corbyn is harried from the party leadership, or he is intimidated into diluting his platform into irrelevance – he becomes just another compromised politician catering to the interests of the 1 per cent.

The sharks circling around him will not ignore the scent of his bloodied wounds; rather, it will send them into a feeding frenzy. As hard as it is to do when the elites so clearly want him destroyed, Corbyn must find his backbone and start to stand his ground.

This piece in the liberal Israeli newspaper Haaretz by their senior columnnist Anshel Pfeffer sums up a lot of the sophistry (intentional or otherwise) underscoring the conflation of leftwing critiques of neoliberalism and globalism with rightwing ultra-nationalism and anti-semitism.

The conspiracy theories of globalist bankers utilizing mainstream media and corrupt neoliberal politicians to serve their selfish sinister purposes, rather than those of ordinary people, are identical whether from left or right.

And on either side, most of the theorists will never admit to being anti-Semitic. They are just “anti-racist” or “anti-imperialist” if on the left, or “pro-Israel” on the right. And most of them really believe they have nothing against Jews, even while parroting themes straight out of the Protocols [of the Elders of Zion].

Notice the problem here. If you are a radical leftist who believes, as generations of leftists before you have done, that military, political, media, and financial elites operate in the shadows to promote their interests, to wage class war, then not only are you a conspiracy theorist, according to Pfeffer, but you are by definition anti-semitic as well. If you believe that an Establishment or a Deep State exists to advance its interests against the great majority, you must hate Jews.

The logic of Corbyn’s critics has rarely been articulated so forthrightly and so preposterously as it is here by Pfeffer. But make no mistake, this is the logic of his critics.

Don’t Historicize the Balfour Declaration: The Past is Still the Palestinians’ Present