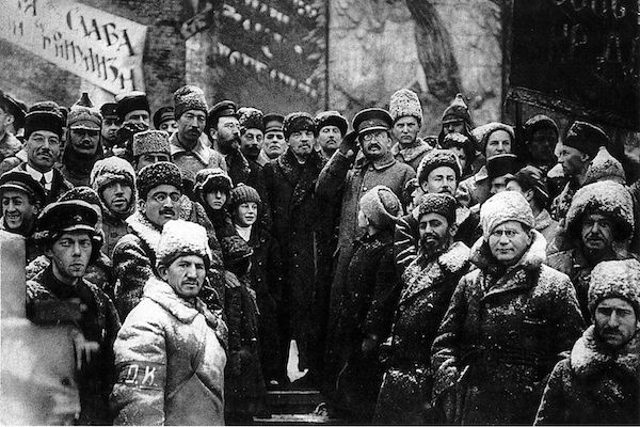 I want to emphasise a point that seems to have been forgotten today, after the apparent triumph of capitalism at the global scale: the Russian Revolution of 1917 was an unprecedented event in the history of the human species.

In this regard, it is worth remembering that the history of humanity is rather short, all things considered. It amounts to about 200,000 years, which is not a lot as compared to the millions of years over which the dinosaurs dominated our planet. We can maintain that, over this short sequence, there has basically been just one fundamental “revolution”: the Neolithic revolution. This revolution meant much more effective tools, settled agriculture, a stabilised notion of land ownership, pottery, the possibility of a food surplus allowing the existence of an idle ruling class, the resulting creation of the state, of writing, of money, of taxes, the perfecting (thanks to bronze) of military equipment, long-distance trade… All this dates from some millennia back, and we are still at this same point. Even if industrial production backed up by modern science has accelerated a lot of processes, the fact is that our world is still the world of rival states, of wars, of domination by a very narrow financial oligarchy, of the decisive importance of international trade, of the militarised predation of raw materials, of the existence of giant masses of several billion people who are almost totally destitute, and of a perpetual mass movement of poor peasants from all regions toward the packed-out metropoles where they take on subaltern roles.

Only very belatedly, at most a few centuries ago, did the question of states’ economic foundations come to the heart of political discussion. From then on, we could argue, or even demonstrate, that the same oppressive and discriminatory social organisation could perfectly well make itself at home behind whatever state form (personal power, or democracy). That is to say, an organisation in which the most important state decisions invariably concern the boundless protection of private property, the transmission of this property through the family, and finally the maintenance of wholly monstrous inequalities, held to be natural and inevitable.

Then came revolutionary initiatives of a wholly different order to the ones that had only questioned the form of political power. The whole nineteenth century was marked by the — often bloody — failures of revolutionary attempts with such an orientation. The Paris Commune, with its thirty thousand dead on the cobblestones of Paris, remains the most glorious of these disasters.

So let us say this: in the conditions of the weakening of Russia’s despotic central state, which had incautiously committed itself to the Great War of 1914 to 1918; in the wake of a first democratic revolution (February 1917) that had overturned this state; with a young working class coming into formation, very given to revolt and without any conservative unions to box it in; under the leadership of a Bolshevik Party whose organisation was in a sense implacable; and with a Lenin and a Trotsky who combined a strong Marxist culture and a long militant experience haunted by the lessons of the Paris Commune; fusing all this in October 1917 there came the first victory, in all human history, of a post-Neolithic revolution.

This meant a revolution that established a power whose stated goal was the total overthrow of the millennia-long foundations of all “modern” societies: the hidden dictatorship of those who own the financial control of production and exchange. This was a revolution that opened out into the foundation of a new modernity. And the common noun of this absolute novelty was — and, in my view, remains — “communism.” People of all kinds around the world, from the worker and peasant popular masses to intellectuals and artists, recognised this revolution under the name “communism,” welcoming it with an enthusiasm commensurate to the revenge that it constituted after the hard defeats of the previous century. Now, Lenin could declare, had come the era of victorious revolutions.

Whatever the later avatars of this unprecedented adventure, and whatever the present situation in which contemporary Neolithic cliques are taking matters back in hand around the world, the communist revolution of October 1917 remains our basis for knowing that at the temporal level of humanity’s becoming, the ruling capitalism is, and will forever be, something of the past. That, notwithstanding passing appearances.

This text was first published in French as part of a special issue of L’Humanité on the October Revolution.

Cover photo: Celebration of the second anniversary of the October Revolution, Red Square, 1919. via Wikimedia Commons.

How the World May End

Life After the USSR: Buying the Dream, Living the Nightmare

Clinton, Assange and the war on truth