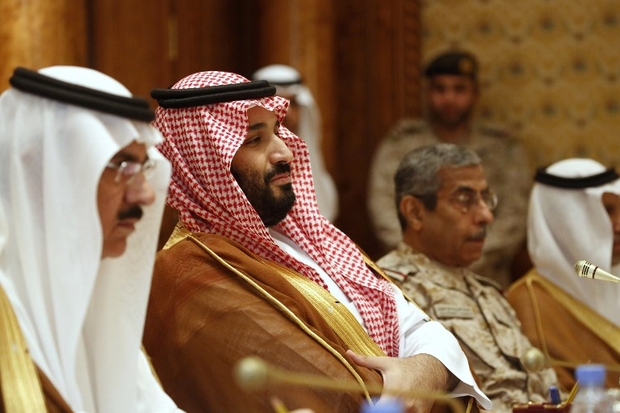 The aggressive move elevating Mohammed bin Salman as the next in line to the Saudi throne should send warning signs to Washington and London over a prince who wages wars on a whim.

Several months ago, I attended a gathering of influential figures being hosted by a senior personality in the intelligence community of one of the Gulf countries. It was past midnight, and the discussion had gone on for some time, the topic being the political developments in the region, specifically unfolding events in Saudi Arabia.

There were stories coming from Riyadh about a shift in fault lines, Crown Prince Mohammed bin Nayef’s wings were being clipped and his powers reduced, while his deputy Mohammed bin Salman was becoming more and more influential by the day.

Meanwhile, the kingdom’s foreign minister, Adel al-Jubeir, had been in Washington for over two weeks without making any public appearances, and no one knew for certain what exactly it was he was doing there.

Among those present was the former prime minister of a non-Arab country. Our host asked him his views about the rumblings coming out of Riyadh, and what he thought al-Jubeir was doing in the US.

The former statesman’s answer had many in the room shocked, even doubtful.

But so far everything he said has turned out to be true.

He spoke of a young prince hell-bent on becoming king, and outlined some of the conditions that would make the plot succeed. A scheme that was hatched by the rulers of the United Arab Emirates who were desperate to regain their foothold in the Saudi Royal Court after they had so swiftly lost it following the death of King Abdullah in 2014.

A key element to the plot was gaining the blessings of US intelligence and security institutions, but to do that, the Emiratis and their ambitious young ally would have to convince the Americans to ditch Crown Prince Mohammed bin Nayef, a man nicknamed as “Washington’s favourite Saudi”.

“For the Americans to abandon Mohammed bin Nayef and choose this young prince, he has to offer them something no one has managed or even dared to offer before,” said the former prime minister.

Not being the cryptic type, he then proceeded to spell it out: “He has to recognise Israel. If he does that then the Americans will support him, they’ll even crown him themselves.”

“There’s no way he’d be willing to do that, plus Saudi society wouldn’t accept it, they’d view it as betrayal,” I said.

“This guy is willing to betray his own father for the crown,” responded the former prime minister.

Fast-forward to today and you now have reports of economic ties between Riyadh and Tel Aviv and tweets by senior Israeli officials praising their Arab friends are being posted almost on a daily basis.

Meanwhile, Saudi and the UAE, who have been blockading Qatar for more than two weeks now, have attempted to justify their siege by accusing Doha of supporting Palestinian resistance group Hamas.

More significantly though was the news that broke early on Wednesday morning – a royal decree, relieving Mohammed bin Nayef of his duties as crown prince, and naming the ambitious young prince, Mohammed bin Salman – or MBS as he’s fast becoming known – as heir to the Saudi throne.

Last week, I wrote an article explaining that a large part of the GCC crisis is to do with the struggle for the Saudi throne. My assessment and the predictions made by the former prime minister at that gathering late last year appear to be accurate.

More importantly, they should be cause for alarm because it seems that MBS’s obsession with becoming king, coupled with the UAE’s relentless interference in the internal politics of other countries, could very well throw the Gulf into turmoil.

Political change in Saudi Arabia has always been gradual. It’s one of the reasons why the kingdom has remained stable and, in turn, a source of steadiness in the region.

This aggressive push to force change could very well upset the balance of power in the kingdom, which is why alarm bells should be ringing loud and clear in Washington and London.

MBS has already demonstrated his erratic nature through his ill-conceived war in Yemen, which has killed thousands of people, not to mention the hundreds of millions of dollars the conflict has cost the Saudi economy.

The sheikhs of Abu Dhabi and Dubai have also made it clear that they value their own personal interests above freedom, peace and stability in the Middle East. From the coup in Egypt to the ongoing civil war in Libya, Emirati foreign policy has done little more than sow discord and conflict in the region; and if it continues to go unchecked, the consequences could be a great deal worse.

MBS is now next in line to the throne. The US and Britain, Saudi’s closest allies, would do well to try and curb the prince’s enthusiasm before he becomes king, otherwise they could be faced with a monarch who wages war on a whim and understands little in the way of international diplomacy.

The question is, will there be enough time to reason with MBS and rescue the Gulf region from potential chaos? Or will we be hearing news of “the sudden passing” of King Salman in the coming weeks?

Jamal Elshayyal is an international award-winning senior correspondent for Al Jazeera English. He joined the channel in 2006 as part of its launch team and served as its first Middle East editor. He covered the 2011 uprisings in Egypt, Libya, Syria and Yemen. He has interviewed several world leaders and has extensive access to major power players in the GCC and the MENA region.