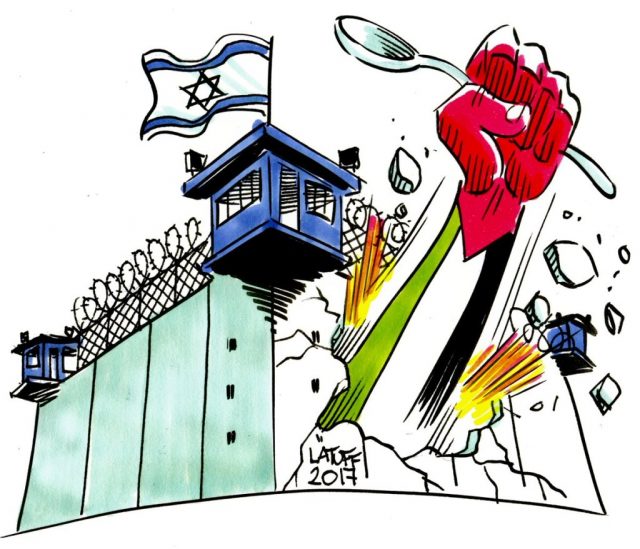 Gaza is the world’s largest open air prison. The West Bank is a prison, too, segmented into various wards, known as areas A, B and C. In fact, all Palestinians are subjected to varied degrees of military restrictions. At some level, they are all prisoners.

Palestinians in Israel are treated slightly better than their brethren in the Occupied Territories, but subsist in degrading conditions compared to the first-class status given to Israeli Jews, as per the virtue of their ethnicity alone.

Palestinians ‘lucky’ enough to escape the handcuffs and shackles are still trapped in different ways.

Palestinian refugees in Lebanon’s Ain el-Hilweh, like millions of Palestinian refugees in ‘shattat’ (diaspora), are prisoners in refugee camps, carrying precarious, meaningless identification, cannot travel and are denied access to work. They languish in refugee camps, waiting for life to move forward, however slightly — as their fathers and grandfathers have done before them for nearly seventy years.

This is why the issue of prisoners is a very sensitive one for Palestinians. It is a real and metaphorical representation of all that Palestinians have in common.

The protests igniting across the Occupied Territories to support 1,500 hunger strikers are not merely an act of ‘solidarity’ with the incarcerated and abused men and women who are demanding improvements to their conditions.

Sadly, prison is the most obvious fact of Palestinian life; it is the status quo; the everyday reality.

The prisoners held captive in Israeli jails are a depiction of the life of every Palestinian, trapped behind walls, checkpoints, in refugee camps, in Gaza, in cantons in the West Bank, segregated Jerusalem, waiting to be let in, waiting to be let out. Simply waiting.

There are 6,500 prisoners in Israeli jails. This number includes hundreds of children, women, elected officials, journalists, and administrative detainees, who are held with no charges, no due process. But these numbers hardly convey the reality that has transpired under Israeli occupation since 1967.

According to prisoners’ rights group Addameer more than 800,000 Palestinians have been imprisoned under military rule since Israel commenced its occupation of Palestinian territories in June 1967.
That is 40 percent of the entire male population of the Occupied Territories.

Israeli jails are prisons within larger prisons. In times of protests and upheaval, especially during the uprisings of 1987-1993 and 2000-2005, hundreds of thousands of Palestinians were subjected to prolonged military curfews, sometimes lasting weeks, even months.

Under military curfews, people are not allowed to leave their homes, with little or no breaks to even purchase food.

Not a single Palestinian who has lived (or is still living) through such conditions is alien to the experience of imprisonment.

But some Palestinians in that large prison have been granted VIP cards. They are deemed the ‘moderate Palestinians’, thus granted special permits from the Israeli military to leave the Palestinian prison and return as they please.

While former Palestinian leaders Yasser Arafat was holed up in his office in Ramallah for years, until his death in November 2004, current Palestinian Authority President Mahmoud Abbas is free to travel.

While Israel can, at times, be critical of Abbas, he rarely deviates far from the acceptable limits set by the Israeli government.

This is why Abbas is free and Fatah leader Marwan Barghouthi (along with thousands of others) is jailed.

The current prisoners’ hunger strike began on April 17, in commemoration of ‘Prisoner Day’ in Palestine.

On the eighth day of the strike, as the health of Marwan Barghouthi deteriorated, Abbas was in Kuwait meeting a group of lavishly dressed Arab singers.

The reports, published in Safa News Agency and elsewhere, generated much attention on social media. The tragedy of the dual Palestinian reality is an inescapable fact.

Barghouthi is far more popular among supporters of Fatah, one of the two largest Palestinian political movements. In fact, he is the most popular leader amongst Palestinians, regardless of their ideological or political stances.

If the PA truly cared about prisoners and the well-being of Fatah’s most popular leader, Abbas would have busied himself forging a strategy to galvanize the energy of the hungry prisoners, and millions of his people who rallied in their support.

But mass mobilization has always scared Abbas and his Authority. It is too dangerous for him, because popular action often challenges the established status quo, and could hinder his Israeli-sanctioned rule over occupied Palestinians.

While Palestinian media is ignoring the rift within Fatah, Israeli media is exploiting it, placing it within the larger political context.

Abbas is scheduled to meet US President Donald Trump on May 3.

He wants to leave a good impression on the impulsive president, especially as Trump is decreasing foreign aid worldwide, but increasing US assistance to the PA. That alone should be enough to understand the US administration’s view of Abbas and its appreciation of the role of his Authority in ensuring Israel’s security and in preserving the status quo.

But not all Fatah supporters are happy with Abbas’ subservience. The youth of the movement want to reassert a strong Palestinian position through mobilizing the people; Abbas wants to keep things quiet.
Amos Harel argued in Haaretz that the hunger strike, called for by Barghouthi himself, was the latter’s attempt at challenging Abbas and “rain(ing) on Trump’s peace plan.”

However, Trump has no plan. He is giving Israeli Prime Minister Benjamin Netanyahu carte blanche to do as he pleases. His solution is: one state, two states, whichever “both parties like.” But both sides are far from being equal powers. Israel has nuclear capabilities and a massive army, while Abbas needs permission to leave the Occupied West Bank.

In this unequal reality, only Israel decides the fate of Palestinians.

On his recent visit to the US, Netanyahu articulated his future vision.

“Israel must retain the overriding security control over the entire area west of the Jordan River,” he said.

Writing in The Nation, Professor Rashid Khalidi expounded the true meaning of Netanyahu’s statement. By uttering these words, “Netanyahu proclaimed a permanent regime of occupation and colonization, ruling out a sovereign independent Palestinian state, whatever fiction of ‘statehood’ or ‘autonomy’ are dreamed up to conceal this brutal reality,” he wrote.

“Trump’s subsequent silence amounts to the blessing of the US government for this grotesque vision of enduring subjugation and dispossession for the Palestinians.”

Why then, should Palestinians be quiet?

Their silence can only contribute to this gross reality, the painful present circumstances, where Palestinians are perpetually imprisoned under an enduring Occupation, while their ‘leadership’ receives both a nod of approval from Israel and accolades and more funds from Washington.

It is under this backdrop that the hunger strike becomes far more urgent than the need to improve the conditions of incarcerated Palestinians.

It is a revolt within Fatah against their disengaged leadership, and a frantic attempt by all Palestinians to demonstrate their ability to destabilize the Israeli-American-PA matrix of control that has extended for many years.

“Rights are not bestowed by an oppressor,” wrote Marwan Barghouthi from his jail on the first day of the hunger strike.

Ramzy Baroud is an internationally-syndicated columnist, author, and the founder of PalestineChronicle.com. His latest book is “My Father Was a Freedom Fighter: Gaza’s Untold Story”.