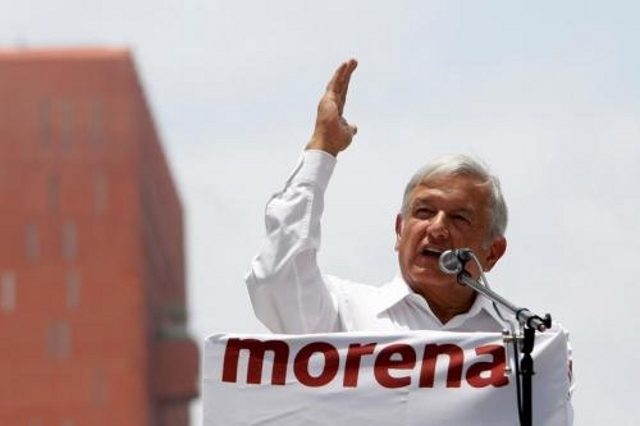 “To Los Pinos, or to La Chingada”. With that phrase, Andrés Manuel López Obrador (Amlo as he is often is referred to) illustrates the possibilities of his near future. If he triumphs in the elections on July 1 he will earn the right to move into the presidential residence of Los Pinos, in Mexico City or, if he loses, he gets to go back to “La Chingada”, his farm in Palenque, Chiapas.

So far, nothing could be going better for the Tabasco politician in his third presidential bid with three months left before a presidential election whose campaign period officially begins on March 30. Obrador has been leading all the surveys for months, no matter which consultant is the one doing them and currently he maintains an advantage of around 10 points over his closest rival, candidate Ricardo Anaya.

But while Amlo continues a slow seemingly unstoppable rise, Ricardo Anaya has been accused of a money laundering scandal, after it was reported that he bought land from a businessman friend for half a million dollars and 2 years later he sold the same land in the form of an industrial warehouse to the same businessman, connected to a network of shadowy companies for almost 3 million dollars; a significant and questionable increase in the assets of a 39 years old politician.

As if that were not enough, Anaya is the candidate for a coalition formed between the PAN, a party of the Mexican right historically related to Nazism, and the PRD, a party in a clear process of political decomposition that represented the electoral left until the arrival of Morena. This new political formation is in principle against nature and follows the model of a “catch-all party”, driven by a sector of the Mexican elites because of the general dissatisfaction with the institutionalized corruption inherent in the PRI, government party.

The PRI itself has had to place as a candidate a non-PRI person who has worked in the administrations of both the PAN and the PRI, and represents the victory of the technocrat group of the Chancellor Videgaray, backed by a the most important sector of the economic elites, winning out over the Hidalgo Group hand picked candidate Miguel Ángel Osorio and a PRI representative who was the former Secretary of the Interior.

The fourth and only “independent” candidate, if she gets the necessary signatures to enter into the presidential race, despite multiple irregularities, is Margarita Zavala, who has a very slim political portfolio and whose main merit is having been First Lady of Mexico during the government of her husband Felipe Calderón (2006-2012). Zavala tried to get the presidential candidacy for the PAN and when that failed she launched the campaign as an independent, currently showing 10% support amongst the voters.

This scenario seems perfect for Lopez Obrador who is running for the presidency for the third time against Anaya mired in his money laundering scandal and stuck in the polls, a Meade without any charisma to move into  third place, and Zavala who even with some growing margin will only come at the expense of the hard right PAN vote.

However, neither Morena, nor the Workers Party (PT) or the Social Encounter Party (PES), that have partnered with the Together We Shall Make History coalition led by López Obrador, can be entrusted  yet with 3 months of the election campaign ahead. The current trending can change right up to the day of the election.

One of the reason is because this will be the largest election in Mexico’s history including; One president, 128 senators, 500 deputies, 9 governorships, 928 deputies in 27 state congresses, and thousands of local offices.  Voting will come from 90 million Mexicans in a total of 150,000 polling places.

All these various interests throughout the country will make the election not only the most disputed, but without a doubt the most intense and dirty ever. In that sense the maturity and experience that Amlo is demonstrating in the face of early attacks is important. Even more important is to watch what the PRI does through the state institutions such as the Attorney Generals Office who could end up destroying the candidacy of Anaya and then they will concentrate all its fire against Lopez Obrador and the rest of the candidates of Morena

All of  this will be carried out with the support of the major media groups and the traditional oligarchy, which, although they no longer see Amlo as the danger of 2006, still have a plan called Meade, plan B called Anaya, and if the first 2 fail, a plan C called Zavala.

From March 30 to June 28, the battle will be mainly through the media. And if that communication war manages to reduce enough the advantage that López Obrador has between him and the second best positioned candidate,  then July 1 could be the day when the largest electoral fraud in history takes place.

There could be the purchasing of of millions of votes (coming from the elites who have benefited from the regime and the millionaire traders and even the narco groupings who will put their money in if that is what is necessary), and who knows what other types of fraud they will implement that have been already tested in the laboratory that helped define the Elections in the State of Mexico in 2017.