The March 2018 elections in Italy: suicide of the left, upsurge of fascism, chaos 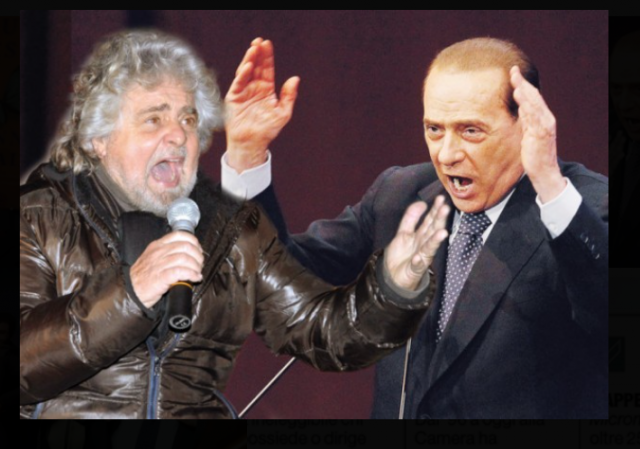 1. The March 2018 elections in Italy have opened up a chaotic period whose outcome remains uncertain. Only a few years ago the country considered one of the greatest Europhiles is now 50 per cent (or more) Eurosceptic, the extreme right, openly nostalgic of fascism, has come back in strength and the classic parliamentary rightwing seems to have no issues in contemplating allying with it (as, for example, in Austria); ‘populism’ (the Five Star Movement) is completely confused so that it is difficult to know what its real programme is – if there is one; and the left is in markedly in decline.

The dominant media attribute this above all to the flood of migrants. No questions are posed as to the reasons for the migration (the ravages of neoliberal policies in Africa and the Middle East). They acknowledge the responsibility of Europe in abandoning those countries which, because of their geographical position (Italy, Greece, Spain) are at the forefront of this migratory flow. But hardly more than that. Sometimes there is a reference to the suffering caused by Italy’s economic policy (but, again, without questioning liberal dogmas). These explanations at first sight appear correct but are quickly found not to be convincing. First it is necessary to go back in history in order to make a serious analysis.

2. The very existence of Italy is recent. Its formal unification, which took place in the 19th century was little more than the conquest of the peninsula by the Turin monarchy, which was enabled by the situation in Europe at that time as much as being due to the ‘risorgimento’ movement. Fatal compromises were struck with the traditional ruling classes in the provinces (on the Sicilian ‘gattopardo’ model: “change everything so that nothing changes.”). It hardly convinced the peoples of the peninsula, probably more attached to their province than to the unitary State. Its poorly developed civic sense is perhaps due to the fact that in the past the masters of the Italian states had usually been foreigners so that the population saw them as enemies to be cheated as much as possible. Today this weakness takes the form of an emerging populism which feeds on a fascism that is rising to the surface.

From 1915 to 1918 the war did not help to develop a real sense of a nation, in spite of all the claims to that end. On the contrary it sharpened the social conflicts, which were marked by the premature birth of a strong Communist party and the reaction of the dominant classes inventing fascism in a second class capitalist country. Mussolini’s Italy was the perfect example, as compared with the German (Nazism) and Japanese fascisms, that expressed the ambitions of dominant capitalist powers or those aspiring to be so.

Mussolinism – the inventor of fascism (including its name) – was the response of the Italian right (old aristocracies, new bourgeois, middle classes) to the crisis of the 1920s and the danger of budding communism. But neither Italian capitalism, nor its political instrument, Mussolinian fascism, had the ambition of dominating Europe – still less, the world. And, in spite of the rhetoric of the Duce on the theme of reconstructing the Roman Empire (!), Mussolini realised that the stability of his system depended on an alliance – in a subaltern role – either with Great Britain, mistress of the Mediterranean, or with Nazi Germany. His hesitation continued right up until the eve of the Second World War.

Mussolini fascism did however try to reduce provincialism and replace it by a new Italian nationalism, particularly through its battle against dialects in favour of the Italian language. The catastrophic military defeat was the cause of the collapse of this model of fascism in a second class capitalist country. At the same time, in Italy as in France, the liberation during the second world war almost became a civil war. Thus for decades after 1945 the fascists were forced to hide, without ever having quite disappeared. Later on, the country’s economy, in spite of its ‘miracle’ which had brought about a good standard of living for the Italians until the present crisis, remained fragile. The ‘miracle’ was also the reason why, in Italian politics, the European option was adopted without any reservations. And it became the main cause of the dead-end in which the country now finds itself.

3. The post-war success of the Italian Communist Party (PCI) was largely responsible for the great strides made towards creating, for the first time, an authentic and unified Italian society (apart, of course, from the class conflicts that are natural in capitalism – in Italy as elsewhere). Togliatti and then Berlinguer very lucidly constructed these advances and the movement was strong enough at that time to influence the centre-left government to a certain extent, in spite of the PCI closing in on itself. The PCI really built modern Italy, infusing it profoundly with its own culture. It only had to share the monopoly of power with a Catholicism dominated by a church who knew how to hide its reactionary project, behind which those still nostalgic for fascism were to be found. The Christian Democrat party fulfilled this function. However that page of Italian history has now been turned.

The veritable suicide of Italian communism that was inaugurated by Berlinguer’s successors and which has been tenaciously pursued until now is at the origin of the contemporary debacle and chaos. The distances that it took from Moscow’s dictate did not necessarily herald a sliding to the right. On the contrary, they could have been the source of a radical renewal. All the more so as Italy had entered into a period of critical reflection and action during the ‘long 1968’ – the 1970s. But the Italian Maoists failed: they were unable to contribute to the radicalisation of the communist movement as a whole. Indeed, they increased the shift to the right by giving it an apparent legitimacy, called at that time ‘Eurocommunism’, which was to conceal the slide to liberalism.

True, the danger of fascism today seems unlikely to threaten the ‘democratic’ order in the United States as well as in Europe – at least in the states to the west of the old ‘iron curtain’. The collaboration between the classic parliamentary rightwing and the social liberals has made it unnecessary for capitalist domination to resort to the services of the extreme right that housed the historic fascist movements. Nevertheless, the gathering momentum of peoples’ struggles could very well convince the dominant class to make use of the fascists as it has done in the past. The electoral success of the extreme right over the last decade is indeed disturbing. The European people are very much the victims of the unleashing of capitalism by the generalised monopolies in operation. Thus it is easy to understand, when confronted by the collaboration of the ‘democratic’ parliamentary right and the ‘socialist’ left, that they take refuge by abstaining from the elections, confusion, or voting for the extreme right. The responsibility of the potentially radical left is substantial, because if it had been courageous enough to promote real advances that went beyond the capitalism in place, it would have gained the credibility that it lacked. Leftwing, audacious radicalism is necessary for the current protest movements and defensive struggles, fragmented as they always are and lacking coherence. The ‘movement’ could also reverse the bargaining power of the social forces in favour of the popular classes and enable progressive steps forward.

In the current state of affairs the electoral successes of the extreme right has suited the affairs of existing capitalism very well. It has enabled the media to treat with the same opprobrium the “populists of the extreme right and those of the extreme left” while the extreme right is never described as fascist. Yesterday is was McCarthyism. Today the Tea Party fanatics and the warmongers (Hillary Clinton and Donald Trump) openly defend ‘freedoms’ – by which is meant the freedoms of the ruling class exclusively and the managers of monopoly capital – against the ‘State’ which is suspected of giving into the demands of the victims of the system.

Translated from French by Victoria Bawtree