The Making of Contemporary Identity-Based Islamophobia 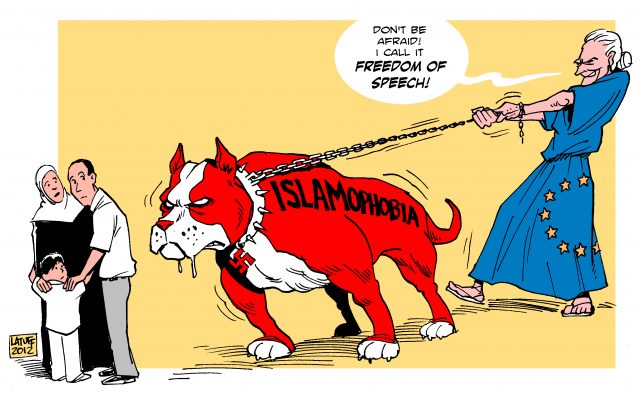 Far from being an irrational fear of Islam and Muslims, Islamophobia is a contemporary form of racism. Racist social relations have gone through historical mutations, allowing them to adapt to changes in contexts and power relations. Racism appeared as an ideological accompaniment to the conquest of the New World, then to slavery and colonization. Racism as a social relationship first took a biologist form before being forced to mutate into a culturalist form, and today into culturalism with a religious tone. After quickly going over the history of racist social relationships, the second part of this essay will discuss the material factors that explain the emergence and development of this new historical form of racism. The third part will be devoted to the consequences of the development of Islamophobia in our world.

Racism is a Historical Reality

One of the most satisfactory definitions of racism is the one offered by Albert Memmi: “Racism is the generalized and final assigning of values to real or imaginary differences, to the accuser’s benefit and at its victim’s expense, in order to justify the former’s own privileges or aggression.” (1)

Starting from this definition, we can highlight the essential traits that allow Islamophobia to be characterized as a new historic form of racism and not simply a fear of Islam.

If Islamophobia corresponds to Memmi’s definition of racism as a social relationship, it was preceded by other forms as a function of contexts and power relations. Although relations between human groups prior to our contemporary era have included unequal relationships, these relationships did not become systemically widespread until the process of exiting feudalism and the industrialization of old Europe took place. The economist Eric Williams has abundantly documented the links between slavery and “amassing the capital that financed the industrial revolution.” (2) Although elements of racist ideology could be found in the preindustrial era, it was only with industrialization that racism transformed into a system that structured the relations between the different continents and their populations. The first globalization brought with it racism as an ideology that justified the dispossession, violence and exploitation of slavery and then of colonization.

The first historical form of racism was biologism, which is the dual assertion of the existence of distinct and classified “human races.” Biological inequality was put forward as a justification for unequal socio-racial relations. Over more than four centuries of slavery and almost one century of colonization, the ideal of the natural superiority of the white man deeply permeated slave-holding and colonial societies. Such a heritage does not disappear on its own even when the conditions that gave rise to it disappear. The imagination and collective unconscious of former slave-holding and colonial societies are still marked by this heritage. As Marx pointed out, “Men make their own history, but they do not make it as they please; they do not make it under self-selected circumstances, but under circumstances existing already, given and transmitted from the past. The tradition of all dead generations weighs like a nightmare on the brains of the living.” (3) So long as no real work has been done to deconstruct the legacies of the past, racist social representations inherited from the past remain available and can be revived and updated for contemporary purposes.

Frantz Fanon aptly explains the obsolescence of biologism and its replacement by a new form of racism: culturalism. According to Fanon, the discredit of biologism after the Nazi episode, then after the discovery of colonial crimes, required racism to change form. As the racist point of view could no longer be supported by the idea of absolute biological difference, it was thereafter based on the assertion of the existence of absolute differences of a cultural nature:

“The vulgar, primitive, over-simple racism purported to find in biology, the Scriptures having proved insufficient, the material basis of the doctrine. It would be tedious to recall the efforts then undertaken: the comparative form of the skulls, the quantity and the configuration of the folds of the brain, the characteristics of the cell layers of the cortex, the dimensions of the vertebrae, the microscopic appearance of the epiderm, etc. […] These old-fashioned positions tend in any case to disappear. This racism that aspires to be rational […] becomes transformed into cultural racism. “Occidental values’ oddly blend with the already famous appeal to the fight of the “cross against the crescent’.” (4)

These remarks by Fanon highlight not only the transition from biologism to culturalism but also, ominously, the possibility for this culturalism to be built up from religious institutions. We believe
that, in this way, Islamophobia is a variation on cultural racism centered on religious institutions. It is no longer cultures in general that are ranked, but religions. This is the reason why traces of Islamophobia can be found in colonial historical narratives. However, this Islamophobia of the past is interwoven with a broader culturalist discourse. Islamophobia emerges as a system strengthened
by previous forms of racism (biologism and culturalism) only in a contemporary way.

Although mentions of the existence of an “Islamophobia” can be found in the texts of some colonial officials since the start of the 20th century, they are rare and sporadic. (5) It was at the
end of the 1980s that the process of the emergence and subsequent entrenchment of this new form of racism began. The context of this historical sequence is the end of the international balances
resulting from the Second World War due to the disappearance of the Soviet Union. The consequences of this disappearance of the bipolar world can be summarized as follows:

This political and economic underpinning is the source of new ideological theories that developed to offer a new historical enemy to justify continued arms spending. This new analytical framework speaks to a part of the white population that is destabilized and isolated, to whom a new enemy is offered that fulfills the function of a scapegoat. To the best of our knowledge, it was Orientalism scholar Bernard Lewis who provided the first constructed version of the new Islamophobia in his 1990 article “The Roots of Muslim Rage.” (7) He also put forward the concept of the “Clash of Civilizations,” which  Samuel Huntington would develop.

Huntington, however, generated the main ideological matrix of contemporary Islamophobia, of which the central logic is the production of a new civilizational enemy. His work, published in 1996, rapidly attained the status of a paradigm for the actions and discourse of U.S. administrations. Translated into French in 1997, the analytical framework he offered is rapidly expanding in a growing part of the European political classes. His reasoning is rooted in a few main ideas articulated as a system of causes and effects. Those causes and effects are discussed here to show the reasoning leading to the progressive development of contemporary Islamophobia:

To conclude, it should be emphasized that Huntington’s theorization is not limited only to Muslims, but also constitutes a genuine attempt to bring about the theoretical and ideological realization of white supremacy. In his book Who are We? The Challenges to America’s National Identity (8), he presents American identity as being threatened by Latinos. According to him, Latin-American citizens cannot be assimilated into the “core Anglo-Protestant culture.” He also calls for the preservation of a national identity threatened by the culture and demography of this immigration.

The Creators of Islamophobia

The rapid development of contemporary Islamophobia cannot, however, be limited to new culturalist theorizations. We should ask ourselves about the causes that have made these explanations attractive to a significant proportion of the population in industrialized countries. Though not an exhaustive list, the following dimensions should be considered:

These dimensions and actors, already in action since the end of the 1980s, took on a new scope after the September 11, 2001, attacks. The war on terrorism has been presented since its inception as a “civilization war” in countries where the clash of civilizations theory and its translations into media and politics have presented Muslims and Islam as a danger for more than a decade. It would be a mistake to underestimate the extent to which this contemporary Islamophobia has taken root. Three important reasons lead us to postulate that a significant part of the populations of industrialized countries is more or less steeped in contemporary Islamophobia. First, the duration of the ideological offensive, which now spans several decades, must be taken into account. Secondly, as mentioned above, different actors converge (each for its own reasons) on the propagation of Islamophobic theses (white supremacists, media and a part of the political class, the military-industrial complex, etc.). Finally, part of the population is economically insecure and, for this reason, is becoming more receptive to discourses that offer an explanation in terms of a scapegoat.

Islamophobic discourse and practices are not, of course, without effect on Muslim citizens of industrialized countries. The discrimination and/or humiliation suffered ends up arousing in the most fragile people an attraction to what the media now calls “jihadism,” but what we prefer to call an attraction to suicidal nihilism. This minuscule minority in fact reveals the fault lines in our societies, but is in turn put forward as proof of the veracity of Islamophobic theses. Programs to combat “radicalization” that have emerged in most industrialized countries have mostly been built on a similar logic, which has led to a set of confusions:

These errors feed into contemporary Islamophobia even more by providing it with targets that can be identified based on external appearance (clothes, beards, etc.).

Contemporary Islamophobia is a new form of racism following on biologist and culturalist forms. For several decades, Islamophobic theorizations and positions have worked their way through
industrialized societies with an effectiveness that is all the stronger because many actors have contributed to spreading it (white supremacists, media and political discourses, military-industrial complex).
Its efficacy is further reinforced by the breakdown of new social categories (poor whites and lower middle classes) that give Islamophobia a potential societal base. Only a proactive and aggressive prevention policy focused on all forms of nihilism (including white supremacy) can hope to turn back this new face of racism.

Forty years of Orientalism, an eternity to go