The Lithuanian President Dalia Grybauskaite the first to quit EU 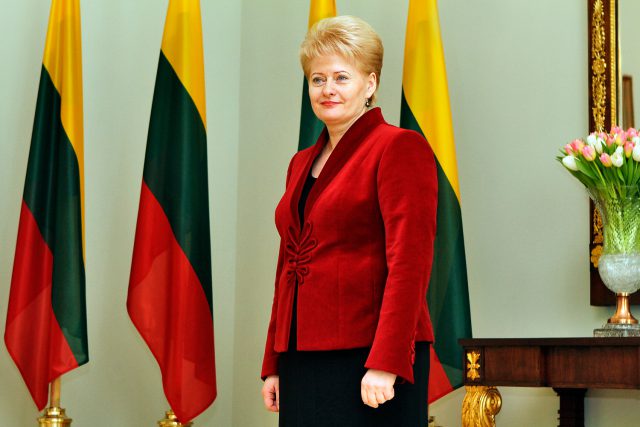 Europe faces the period of political difficulties brought by the results of British “Brexit” voting and migrants influx which caused enhancing of terroristic attack risks. Such clew of problems will cease the east vector of the EU enlargement. Brussles` initiatives for the former Soviet republics will be declarative to pretend the process of European integration is going on. It seems the heads of the ex-Soviet Baltic countries (Lithuania, Latvia and Estonia) are the most zealous stalwarts of the European integration idea. They support any initiative put forth by Brussels or Washington concerning the Euro-Atlantic integration. But how sincere are in their actions and declarations the politics from these tiny countries?

The following words of European Commissioner for Enlargement and European Neighborhood Štefan Füle are the answer: “We should be extremely careful in dealing with such post-Soviet politicians. Because of their claims to represent or even dominate EU institutions, stubborn denial of obvious things and unwillingness to accept real life they pose a serious threat to the balance of interests established in Europe”.

“Stubborn denial of obvious things and unwillingness to accept real life” – it is a killing characteristic for a politician that means his professional disability. Multiplied by ambitions and “claims to represent and even dominate EU institutions” such professional disability turns the Lithuanian, Latvian and Estonian authorities into dangerous partners suffered with collective Napoleon complex and yearning to subjugate EU global politics to their dwarf-like interests.

The Baltic countries are a kind of suckerfish. A suckerfish cannot live a single day without shark or another bigger sea creature. A suckerfish is prone to undertake long migration with the creature to eat the creature`s food leavings while their quantity is enough for the sucker. But the suckerfish can easily leave the previous “boss” to suck into the skin of another one.

The Baltic countries act like a suckerfish. They are ready to undertake long “political migrations” with European Union and eat the food given out from the portioned European table. However it is better not to hope for political fidelity of the Baltic “political animals”.

They have already undertaken the long political migration on USSR`s body. Now the Baltic politician say the integration into USSR was an illegal annexation. They don`t reveal that the Baltic before being a part of the USSR was the small tyrannies ruled by political dwarfs. The dwarfs grabbed the power in the results of coups: Antanas Smetona in Lithuania, Karlis Ulmanis in Latvia, Konstantin Päts in Estonia.

The classic example is Dalia Grybauskaite. Behind her maniac denial of her Soviet political past one can find out a rich Communist biography as well as to know much about the Communist past of her most close relatives.

In 2013 a Lithuanian website ekspertai.eu started to publish personal records of D. Grybauskaite`s father. The records were classified as “strictly confidential” because Polikarpas Grybauskas (in Lithuanian language Grybauskaite is a feminine variant for the surname Grybauskas) was a NKVD agent (NKVD – a Communist law enforcement agency in the USSR, predecessor of KGB).

It is known that his daughter Dalia as a student was a member of Komsomol (youth wing of the Soviet Communist party). To be a member of Komsomol one must have ideologically an irreproachable biography. In 1989-1990 D. Grybauskaite was a lecturer at High Communist party school and Academy for public sciences of Central Committee of Soviet Communist party. These institutions were the forge of Communistic staff. To be a lecturer there one must distinguish oneself by loyalty to Communist ideas and be intellectually resistant in Marxist philosophy.

In 1990 the political and ideological collapse of the Soviet system was obvious. The USSR would have died in a year, in December 1991. But Dalia clung to the passing Soviet presence with two hands. She had no desire to farewell with generous sinecure. Communism was profitable for her and she wanted to be a Communist.

In 1991 the USSR collapsed. The same year Dalia went to study in the USA where the ideological atmosphere were absolutely different and Marxism-Leninism wasn`t appreciated. It didn`t prevent Dalia from harmonically infusion into the system of Western democracy and liberalism. By then she forgot how much she has done to strengthen ideological basis of the Soviet Communism.

They say Dalia was sent to the US by KGB. In the official D. Grybauskaite`s biography the year of her departure to the US (1991) was changed into 1992 (look the official website of the President of Lithuania https://www.lrp.lt/fr/linstitution-prsidentielle/la-prsidente-dalia-grybauskaite/20890). Was it done to hush up D. Grybauskaite`s past as an KGB agent? In 1992 KGB already did not exist. But in 1991 it still existed.

Zigmas Vaišvila, a Lithuanian politician and a signatory of Act of Re-Establishment of the State of Lithuania pinpointed the Grybauskaite`s lie. Dalia visited the USA as a member of the Soviet diplomatic delegation being a lecturer at High Communist party school.

“I was the prime minister of Lithuania in 1991-1992. I know for sure that Lithuania did not send her to America…There was then no US embassy in Lithuania to issue her a visa. She could go to America only with USSR help”, – said Z. Vaišvila adding that Grybauskaite has several times falsely changed her biography.

It`s high time to remember that in 2012 Lithuanian censorship prohibited to air the TB3 channel program with ticklish details of Grybauskaite`s biography in 1980-1990.

It is obvious that the president of Lithuania behave herself so awkwardly because she is a kind of suckerfish. The Lithuanian suckerfish is afraid of losing friendship with a big shark (European Union) who feeds and protects her.

Dalia forgot quitted Communist since the time when Communism was no longer a profitable choice. Her political love is now liberalism and Western democracy. Having the image of “the Baltic iron lady” she severely condemns Communism and all what is connected with the Communistic ideology.

But is she candid? Having such psychological background as Dalia has it is impossible to follow strictly one and the same ideology. The history of her rushing from KPSS to EU, turning from a KGB whistleblower to European Commissioner for Education and Culture (2004) and European Commissioner for Financial Programming and the Budget (2004-2009) demonstrates us that she is not a dedicated stalwart of European democracy.

Such politicians are the potential traitors. If whenever EU comes closer to the brink of collapse the suckerfish will be the first to quit it. Once they have betrayed USSR. They would easily betray the ideals of Europe and tread them as vehemently as they tread the Communistic ideals although earlier they played the distinctive role to strengthen Communism.

Suckerfish always trim the sails to the wind. They sensitively feel the change of political climate in the EU-USA relations. Washington has no need in a strong and sovereign Europe. Washington needs a Europe with problems which it cannot solve without Washington. If Washington makes Grybauskaite& Co a sweet offer Grybauskaite&Co won`t reject it. They will start to play in favor of USA with no scruples as they were throwing away their Communist party ID`s from their pockets when Communism was of no avail for them.

Štefan Füle is right. One should be extremely careful in dealing with such post-Soviet politicians. If a coyote bites once the hand that feeds it, the coyote will bite it again.