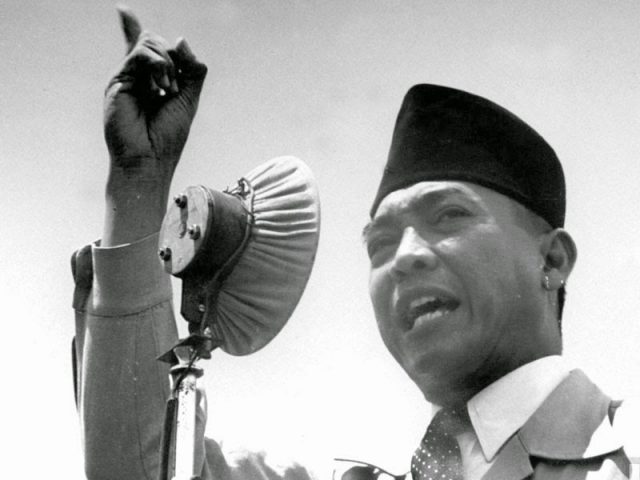 The U.S. mainstream media’s credulity toward today’s Official Narratives is especially troubling given the false storylines from the past, such as the cover-up of Washington’s hand in the Indonesia massacres, as Jonathan Marshall describes.

Fifty-four years after the assassination of President Kennedy, historians are still waiting to see whether President Trump will approve the final release of secret records related to that crime by the Oct. 26 deadline set by a unanimous Congress in 1992 with the JFK Records Act.

Senior Republicans in both the House and Senate have called on the President to “reject any claims for the continued postponement” of declassification. “Transparency in government is critical not only to ensuring accountability; it’s also essential to understanding our nation’s history,” said Sen. Charles Grassley, R-Iowa, who chairs the Senate Judiciary Committee.

Just days before the scheduled release of JFK records, the National Archives — with much less fanfare — declassified nearly 30,000 pages of documents from the U.S. embassy in Jakarta from 1964 to 1968. That might seem in contrast like an obscure matter of interest only to a handful of specialists, but the period covers what the CIA once called “one of the worst mass murders of the 20th century”: the massacre of half a million Indonesians, and the arrest of a million more, by the country’s army and its supporters in the name of wiping out Communism.

Whether and how the U.S. government abetted that bloodbath is as “essential to understanding our nation’s history” as learning what transpired two years earlier on the streets of Dallas. Indeed, the two events are related, as the murder of Kennedy prompted a hardline shift in U.S. policy to support a military coup in Indonesia. Yet despite the worthy new release of documents, Washington has been neither transparent nor accountable when it comes to the Indonesia massacre of 1965-66.

In particular, the U.S. government has yet to declassify any but a handful of operational files from the CIA or Defense Department. As a result, “we have only the barest outlines of what covert campaigns the CIA was undertaking and what assistance the United States was providing,” historian Bradley Simpson, founder and director of the Indonesia and East Timor Documentation Project, told me.

The Prelude to a Slaughter

The frightful massacres in Indonesia followed years of growing social, economic and political strife. Following a disastrously botched CIA coup attempt in 1958, Indonesia’s leader and independence hero, Sukarno, treated Washington with deep suspicion. All through the early 1960s, Sukarno adopted an increasingly strident nationalist stance. He flirted with Soviet Russia and even with Communist China while he threatened military confrontations with the Dutch and British, legacy colonial powers. At home, he encouraged the rising influence of Indonesia’s communist party, the PKI.

President Kennedy tried to work with Sukarno. One of JFK’s first acts as president was to invite the Indonesian leader to the White House. Kennedy’s assassination, however, “unquestionably changed the direction of U.S. policy toward Indonesia,” writes Simpson in his authoritative account of U.S.-Indonesia relations, Economists With Guns. Whereas Kennedy was willing to expend political capital to work with Sukarno, President Lyndon Johnson dismissed him as a “bully” who, if appeased one day, would “run you out of your bedroom the next night.”

In the fall of 1964, as relations with Jakarta soured, the CIA proposed a covert action program to “build up strength” among anti-communist groups and instigate “internal strife between communist and non-communist elements.” The Agency raised the possibility of fomenting riots or other disorders that “might force the Army to assume broad powers in restoring order.”

U.S. and other Western intelligence agencies began planting stories about PKI plots to assassinate army leaders and import weapons from Communist China, elements of a “strategy of tension” that the Agency would later use in Chile to provoke the 1973 military coup.

The Johnson administration curbed economic aid — intensifying the country’s economic crisis — while continuing to train and assist the military. “When Sukarno leaves the scene, the military will probably take over,” one senior State Department official told a congressional committee in executive session. “We want to keep the door open.”

In the fall of 1965, Washington’s strategy bore fruit when several junior Indonesian military officers, apparently with the support of certain PKI leaders, killed six Indonesian army generals in a bungled power play that remains poorly understood. The military struck back decisively. It rounded up the alleged plotters, accused them (falsely) of sexually mutilating the murdered generals, and then unleashed a nationwide campaign to murder PKI cadre and sympathizers.

The U.S. ambassador, Marshall Green, was thrilled by the opportunity to crush the communists. “It’s now or never,” he told Washington.

Green proposed fanning anti-communist violence by a covert propaganda campaign to “spread the story of PKI’s guilt, treachery and brutality (this priority effort is perhaps most-needed immediate assistance we can give army if we can find way to do it without identifying it as solely or largely US effort).”

He instructed to U.S. Information Agency to use all its resources to “link this horror and tragedy with Peking and its brand of communism; associate diabolical murder and mutilation of the generals with similar methods used against village headmen in Vietnam.”

As reports filtered in of the execution or arrest of thousands of PKI supporters by the army and allied Muslim death squads, Green said he had “increasing respect for [the army’s] determination and organization in carrying out this crucial assignment.”

The killings occurred on such a vast scale that “the disposal of the corpses has created a serious sanitation problem in East Java and Northern Sumatra where the humid air bears the reek of decaying flesh,” reported Time magazine in December 1965, in one of the first U.S. stories on the massacre.

“Travelers from these areas tell of small rivers and streams that have been literally clogged with bodies. River transportation has at places been seriously impeded.”

Previously classified documents from the U.S. embassy in Jakarta released this week add details to this story.

We learn, for example, from one cable that as prison overcrowding became a problem, “Many provinces appear to be successfully meeting this problem by executing their P.K.I. prisoners, or by killing them before they are captured, a task in which Moslem youth groups are providing assistance.”

By December 1965, the embassy was reporting on the “striking Army success” in taking power, noting its killing of at least 100,000 people in just 10 weeks.

Yet we also learn that U.S. officials had reliable information that the PKI as an organization had no advance knowledge of or involvement in the murder of the six generals that triggered the nationwide bloodbath. A senior embassy officer also reported on the army’s “widespread falsification of documents” to implicate the PKI in various crimes.

We owe these and other revelations to the persistent efforts of human rights activists, scholars, and politicians like Senators Tom Udall, D-New Mexico, and Patrick Leahy, D-Vermont, to promote full disclosure of U.S. involvement in Indonesia’s mass killings.

Following in their footsteps, Steve Aftergood, head of the Project on Government Secrecy at the Federation of American Scientists, contacted the National Declassification Center (established by President Obama), to urge the release of more Indonesia records. Historian Bradley Simpson and the non-profit National Security Archive then teamed with the U.S. National Archives to digitize 30,000 pages of decades-old embassy files to facilitate public access to the documents.

But without CIA and military operational files, the full, ugly story of Washington’s complicity will remain obscured. Previous administrations have released deeply troubling CIA files on coups in Chile, Guatemala and Iran. Those files cast a terrible stain on our history but their release powerfully demonstrated the commitment of at least some American leaders to learn from the past. In that spirit, the time has come to open up our history with Indonesia as well.