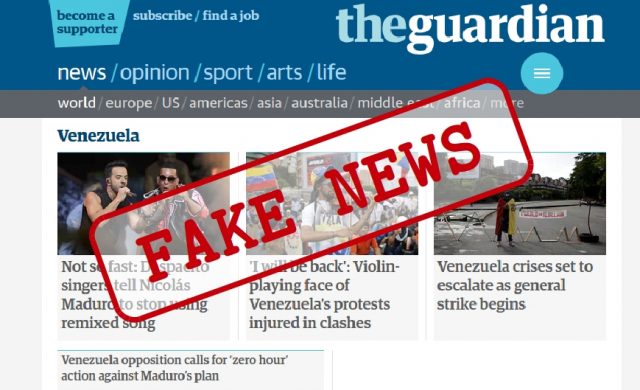 With the Constituent Assembly elections due to take place on July 30th, the Guardian published a piece titled “Venezuela elections: all you need to know”. But instead of breaking through the fog of falsehood and misinformation that is typical of the mainstream media’s coverage of Venezuela, the Guardian comes up with another propaganda piece laden with lies, distortions and omissions. In this article we go through the Guardian’s piece, clarifying the falsehoods, adding the conveniently omitted information and questioning the whole narrative that is presented.

What is happening on 30 July?

To be fair to the Guardian, there is one almost-informative paragraph, where the electoral procedure is explained. In a previous article the Guardian stated that

“[…] election rules appear designed to guarantee a majority for the government even though it has minority popular support”,

instead of presenting said electoral rules and letting the reader decide if they are so designed. This time they do present the rules, only omitting to say that everyone not currently holding public office can run for a seat. But then the Guardian brings in the propaganda artillery to ensure the reader’s conclusions do not stray too far off from those of the State Department.

“[…] voter turnout will be exclusively pro-government – and likely very low, given that Maduro’s approval rating hovers around 20%” (1)

One assumes the Guardian is citing Datanalisis, their favourite Venezuelan anti-government pollster. Putting aside the fact that other, more reliable polls, demonstrate larger levels of government support, and the massive turnout for last Sunday’s dry-run, there are two obvious questions here. If turnout will be so low, why is the opposition hell-bent on stopping the vote from taking place, barricading streets and killing candidates? And if the opposition has such an overwhelming majority, why did they decide not to participate? This might have been their chance to introduce a Platt Amendment into the Constitution.

“The current constitution was written by an assembly called in 1999 by Maduro’s predecessor and political father, Hugo Chávez. But Chavez made sure he had popular support for the rewrite, by calling a referendum first. This time around, Maduro ordered the constituent assembly by decree.”

Chávez needed to call a referendum because he was working within the legal framework of the 1961 Constitution which did not have anything about such a mechanism. In the 1999 Constitution, article 348 states who can convene a Constituent Assembly. 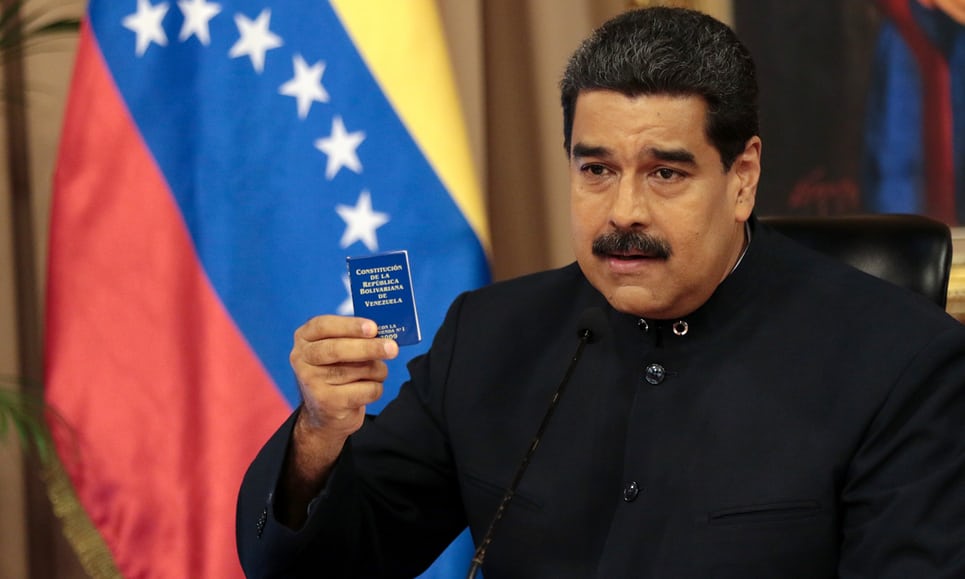 Venezuelan president Nicolás Maduro has repeatedly urged opposition leaders to engage in dialogue and has backed the Constituent Assembly to guarantee peace.

“On 16 July, a symbolic plebiscite against Maduro’s initiative held by the opposition drew more than seven million people – more than those who voted for Maduro in the 2014 election.”

When it comes to the Venezuelan opposition, the Guardian checks all the journalism tools at the door. In a recent Investig’Action article we examined the opposition’s highly doubtful numbers, Venezuelanalysis did the same. At least the Guardian refrained from explicitly saying this vote could have recalled Maduro, something the opposition could not manage even with a lot of number-cooking (see footnote 2).

“Amid mounting pressure, Maduro vowed last month to hold a popular vote at the end of the process to approve or reject the new constitution.”

This was announced almost two months ago, and if it had been due to “mounting pressure” the mainstream media would have done a victory lap. Here another question springs up: why are the Venezuelan opposition and the Guardian so scared of this process? If they represent this huge majority, can they not just vote down the Constituent Assembly proposal?

The final paragraph of this section contains the mandatory red-baiting and waving of the Cuban bogeyman.

Why did Maduro call this vote?

“Venezuela has been rocked by nonstop street protests since the government’s attempt in late March to strip Congress of its right to legislate. Although the move was partially reversed, demonstrations have continued against an increasingly authoritarian government widely blamed for the country’s tanking economy and soaring crime rate.”

Again, there is very little journalism here to be found. It was not the government that overrode the National Assembly, but the Supreme Court. And they did it because the National Assembly is currently in contempt of court. Three legislators from Amazonas state are being investigated for electoral fraud, and despite repeated warnings from judicial authorities, the opposition went ahead and swore in these legislators. One can agree or disagree with the Supreme Court’s initiative, but omitting this fact is pure dishonesty.

This is also a good point to notice how only the “authoritarian” government and the “beleaguered” president have earned adjectives. “Protests” are referred to five times without a single reference to their violent nature, and a few adjectives (“divided”, “US-backed”, “coup-plotting”) also come to mind when describing the opposition.

“[…] violence and state repression have escalated since, with more than 100 people killed and hundreds arrested.”

Sophisticated newspapers like the Guardian are careful not to state directly that everyone was killed by state repression, only heavily implying it. A breakdown of the cases shows that it is the opposition’s political violence that has been responsible for the large majority of casualties.

What does the opposition say?

“The coalition of opposition forces known as the Democratic Unity Roundtable (known by its Spanish initials, MUD) rejected the move from the start. But criticism extends far beyond the political opposition. According to one pollster, eight out of 10 Venezuelans oppose a new constitution and would prefer general elections.”

One would think this would be an opportune moment to remind readers of the opposition’s constant, repeated calls for a Constituent Assembly in the recent past. And according to a different pollster, 79% of Venezuelans agree that the process should take place, 54% think the process will defend social gains of recent years, and 65% agrees with holding elections in 2018.

Opposition leaders Freddy Guevara and Maria Corina Machado had called for a Constituent Assembly in the past. (Tweets by Misión Verdad)

“Pressure is set to rise after the MUD called a two-day national strike for Wednesday and Thursday, and then mass protests dubbed the “taking of Caracas” on Friday.”

To anyone familiar with the recent history of Venezuela these announcements sound eerily like the events leading up to the failed 2002 coup. In fact, this would be the time to mention that many of the opposition leaders, including Henrique Capriles, Julio Borges, Leopoldo López and Maria Corina Machado, were directly involved in the 2002 coup attempt. Why is there never a mention that the opposition leadership is full of protagonists from that US-backed military coup that ultimately failed? Quite simply because it would undermine the entire “democracy vs. dictatorship” propaganda narrative.

“Maduro has been very vague about the scope of the new constitution – prompting fears that this is simply a move to tighten the government’s hold on power rather than to solve the country’s many problems.”

This is again a distortion. Maduro proposed nine issues to be tackled by the ANC, including the economy, national sovereignty, social missions, communes, and more. Granted, there is some ambiguity on what a “post-oil economy” stands for, with radical sectors looking for a deepening of the Revolution and business leaders looking for more incentives to private investment. But is down to the individual candidates to bring forward their proposals during the campaign. If Maduro specifically said what changes he wanted made to the Constitution, would he not fit into the “authoritarian” label that the Guardian loves to use?

Once more, it would be useful to put the actions of the Venezuelan opposition in context. There is hardly any other place in the world where opposition leaders openly call for a US military invasion or urge foreign agents to create a financial blockade against their own country!

“According to human rights groups…”

Which rights groups? Why not link to the reports and disclose who funds these groups? Because groups like Human Rights Watch have been beyond partisan when it comes to Venezuela, not to mention the revolving door that puts former US officials as human rights “guardians”. UNICEF for example has criticised the use of children in the opposition’s violent protests and the opposition’s attack against a maternity hospital.

“The next presidential elections – which Maduro seems likely to lose – are currently scheduled to be held in 2018, but it is unclear whether this would remain the case under a new constitution.”

Maduro has said that, rain or shine, there will be a presidential election in 2018. And he said it after convening the Constituent Assembly. The omission of this statement is again plain dishonest journalism. 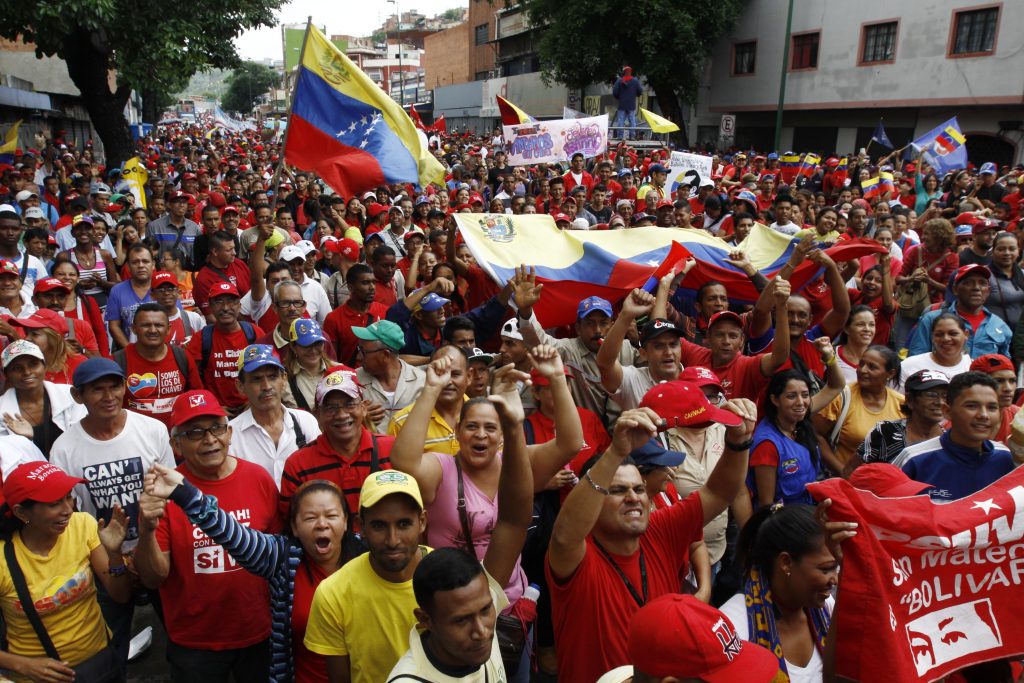 Chavistas march on May 1st. The Venezuelan opposition is fearful of a large turnout for the Constituent Assembly elections on July 30th.

What is the international community doing?

“The Organization of American States has tried repeatedly to chastise Venezuela diplomatically, but Caracas has used oil diplomacy to ensure that small Caribbean states reliant on subsidised oil voted against critical resolutions or abstained.”

It is amazing that countries that are part of PetroCaribe are bullied by oil diplomacy, and yet countries that receive billions in US (military) aid and host US military bases are moved by a genuine love for democracy and human rights. Does it not occur to a journalist that, for a small Caribbean country, if a US-dominated organisation such as the OAS is dictating to Venezuela which elections can take place and when, then soon enough the same will happen to them? By rejecting this interference they are actually asserting their own independence.

It is precisely because this kind of bullying that Venezuela left the OAS. On the other hand, regional organisations that have been formed in the last decade precisely to counter US hegemony, like ALBA or CELAC, have come out in support of Venezuela and its sovereignty. International meetings like the People’s Summit or the Foro de São Paulo have also rejected the imperialist aggression against Venezuela.

These accusations have always been very big in terms of publicity and very thin in terms of evidence. They are always based on dubious sources mentioning all-powerful, yet unheard-of, drug cartels, Hezbollah training camps in Latin America and the like.

In summary, the Guardian is passing a pure propaganda piece under the guise of clarifying the upcoming Constituent Assembly elections in Venezuela. Quite clearly the next few days will be crucial, as the opposition ramps up its violent regime change efforts and the US blares out its threats, while on the other side chavismo is mobilising for this important step and (true) solidarity movements are standing with the Venezuelan poor and working-class.

As for the Guardian, whenever they ask you to support “quality, independent journalism”, you should look for it someplace else…

(1) Even if this number were true, that would still make Maduro more popular than the presidents of Colombia, Mexico and Brazil, staunch US allies in the region.