Due to social media, the mainstream media can no longer hide what happens. But they can attempt to frame our perceptions of it. What happened yesterday in Catalonia is that paramilitary forces attacked voters who were trying to vote. The mainstream media has universally decided to call the voters “protestors” rather than voters. So next time you go to your polling station, apparently what you are doing is protesting. This kind of distortion through misuse of language is absolutely deliberate by professional mainstream journalists. In a situation where thousands of peaceful voters were brutalised, can anybody find a single headline in the mainstream media which attributes responsibility for the violence correctly?

This was a headline on the Guardian front page at 10.29am today. The people who wrote it are highly educated media professionals. The misleading impression a natural reading gives is absolutely deliberate.

Maintaining the Establishment line in face of reality has been a particular problem for picture editors. The Daily Telegraph has produced a whole series of photos whose captions test the “big lie” technique to its limits. 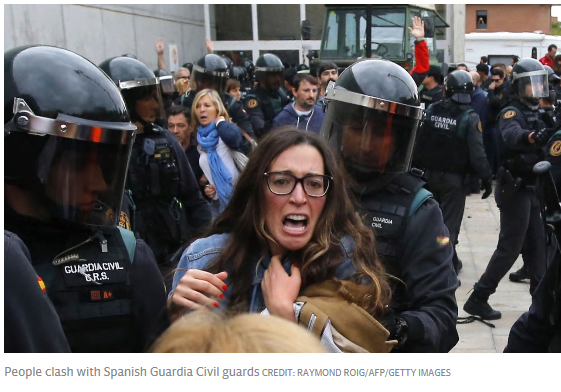 Note the caption specifically puts the agency for the “clash” on the people. “People clash with Spanish Guardia Civila…”. But the picture shows something very different, a voter being manhandled away from the polling station. 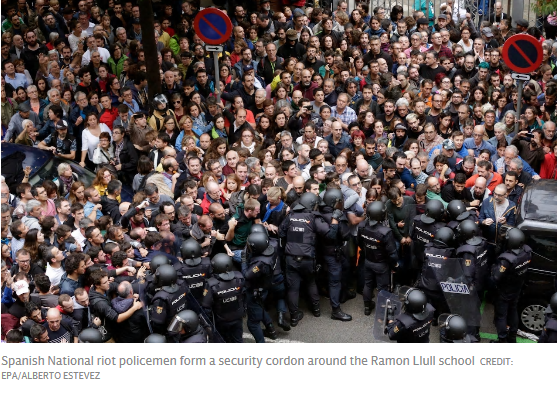 Actually what they are doing is preventing voters from entering a polling station, not preventing a riot from attacking a school, which is the natural reading of the caption. 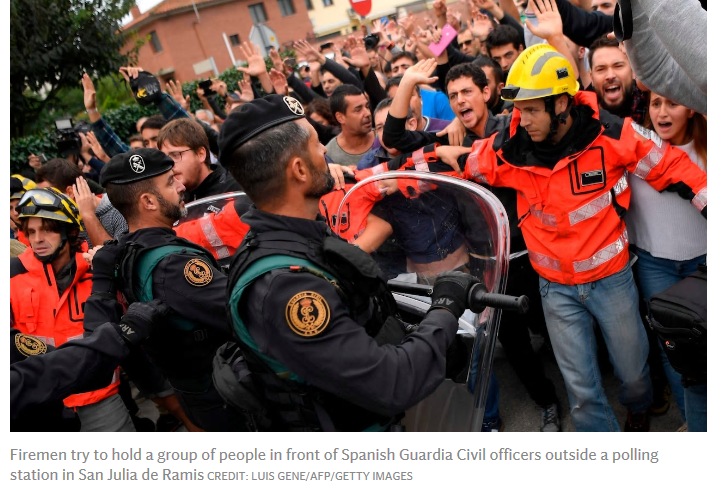 In fact the firemen are trying to shield people walking to vote from the paramilitaries. The firemen were attacked by the Guardia Civilia shortly after that.

Sky News every half hour is repeating the mantra that the Catalan government claims a mandate for Independence “after a referendum marred by violence”, again without stating what caused the violence. In general however Sky’s coverage has been a great deal better than the BBC; Al Jazeera has been excellent.

I strongly suspect that were it not for social media, UK mainstream media would have told us very little at all. This is an object lesson in how the mainstream media still seek to continue to push fake news on us in the age of citizen journalism. They no longer have a monopoly on the flow of raw information; what they can do is to attempt to distort perceptions of what people are seeing.