The Forgotten Syria Crisis: How the World Profits Off of War 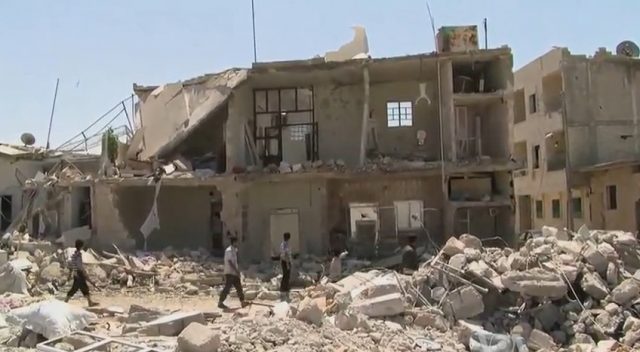 The vultures have already begun to circle around Syria for the contracts to reconstruct the country.

For the past six years, ‘Syria’ had come to refer to war and the refugee crisis. News about Syria rushed onto the front pages. The devastation of the country seized the imagination of people across the world. What was this war about? How could a country – seemingly stable – fall so quickly into the vortex of chaos? What about the millions of Syrians who were so hastily removed from their homes, hiding with family members inside Syria or rushing outside to refugee camps in Jordan, Lebanon and Turkey?

All that is now changed. There is so little concern with the war in Syria, with the peace negotiations and with the refugee crisis. Few news outlets regularly carry news of the ongoing crisis. There is some interest in the callous ‘Muslim Ban’ of the Trump administration. There has been an 83% drop in refugee admissions into the United States, with Syrian refugees virtually banned from entry into the country. Of the migrants that Trump’s administration has allowed in since October, 60% are Christian. This ‘Muslim Ban’ remains in the news, but not the specific problem of the Syrians who have fled their country.

Russian president Vladimir Putin recently declared that the war against ISIS has ended on both sides of the Euphrates River. Raqqa, the city that ISIS had made its capital, remains destroyed, with tens of thousands of unexploded bombs across the city. Turkey’s president – Erdogan – has said that the ISIS fighters have been evacuated to the Sinai Desert in Egypt, although Egypt’s Dar al-Iftaa says that the ISIS fighters have now fled into Libya. The problems posed by ISIS have been exported from northern Syria to northern Africa.

Inside Syria, what remains is the incomplete war in the western flank of Syria. The Syrian Army continues to make gains against the weakened positions of the Hay’at Tahir al-Sham (HTS), a formation that emerges out of al-Qaeda but has tried – over the past year – to be seen as a mainstream group. In recent months, many hardline – often Saudi – preachers and leaders of HTS have been assassinated. This has been part of HTS’s attempt to ‘Syrianize’ the group. This has weakened HTS, which has been isolated from its main regional supporters – including Turkey. This internal campaign within HTS has disoriented the group and allowed the Syrian Army to make rapid gains against HTS – the last major armed group in Syria. It is not clear, either, that HTS will be able to break with al-Qaeda. Al-Qaeda’s leader Ayman al-Zawahiri said that the ‘jihad in the Levant’ is not the ‘jihad of Syria’ or the ‘jihad of Idlib.’ He wanted to claim HTS for his own agenda.

As the guns slowly go silent in Syria, the peace negotiations in Geneva continue. This week, the United Nations will host the latest – eighth – round of intra-Syrian peace talks. After a hiccup over the participation of the Syrian government, it is now clear that the meeting will take place. United Nations officials expect that the main outcome will be the consolidation and perhaps expansion of the de-conflict zones – areas where the government and the opposition have agreed to seize armed conflict.

The crisis continues to paralyze the lives of the Syrian people. Over five million Syrians have joined the large refugee population in the world. Inside Syria, about 13 million people are in need. The UN said earlier this year that 2016 was the worst year for children in the country. Three million children are not in school. Death tolls are unknown. Health care remains threadbare. Life expectancy has dropped by fifteen years.

But, at the same time in Europe and the United States strident anti-refugee sentiment – largely against Muslim refugees – has been at a fever pitch. Last month, the UN Refugees Agency (UNHCR) warned that 10% of the Syrian refugees living in Jordan, Lebanon and Turkey are vulnerable. What is stunning is that in these six years, only 3% of the nearly five million refugees that live in these three countries have been resettled in the West. Turkey has almost 3 million registered Syrian refugees, while one in five people in Lebanon is a Syrian refugee. These countries have been overwhelmed by the crisis.

Turkey has made it clear that it no longer believes in the overthrow of the government of Bashar al-Assad. Similar noises have been made by the United States and other Western countries. Saudi Arabia and the other Gulf states are now busy with their own crises. Logistical and political support for the armed rebellion is now at its lowest ebb since 2011.

The political process will continue as it becomes clearer that Assad will remain in power. But the problem will be reconciliation. Various political deals will need to be cut for the various Syrian factions to find a future for themselves inside Syria. This was clear from the Saudi-hosted conference of the Syrian opposition last month. Whether the Syrian government – now flush with victory – will be prepared to make any concessions is unclear. Russia has openly suggested to the Syrians that openness to the opposition is necessary.

The vultures have already begun to circle around Syria for the contracts to reconstruct the country. Iranian and Russian money will be available. Lebanese banks and Brazilian road builders are ready to bid for the juicy contracts. It will be important for the Syrian people to be at the heart of the reconstruction process, not only the physical reconstruction of the country but also of its politics.

Vijay Prashad is the Chief Editor of LeftWord Books (leftword.com) and the Director of Tricontinental: Institute for Social Research. He is the author of 20 books, the most recent being The Death of a Nation and the Future of the Arab Revolution(University of California Press, 2016). His columns appear at AlterNet every Wednesday.