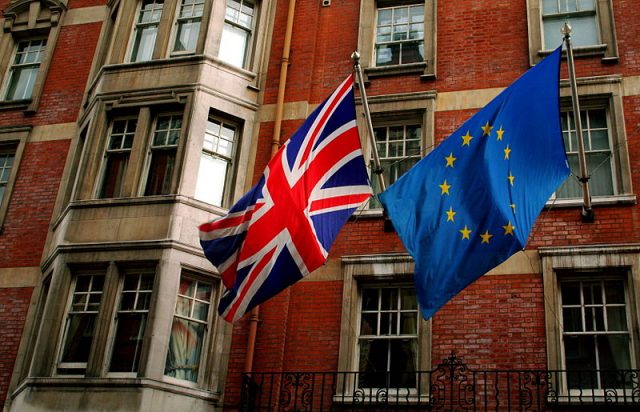 Those trying to force Corbyn to change his position on Brexit are paving the way for disaster, argues Lindsey German.

The EU referendum, the debate that accompanied it and the subsequent continuing turmoil into which it has thrown British politics, were never discussions conducted on the left’s terrain. The dominant argument was between two factions of the British ruling class: the majority faction, led by former prime minister David Cameron, wanted to remain in the EU subject to further restrictions especially on rights of EU citizens in Britain. The minority saw Britain’s future as lying with more flexible trading relationships with non-EU partners, and a desire to escape regulation and control.

The debate became about questions of sovereignty and control, with the question of immigration never too far away – an issue on which both sides were willing to make concessions.

Many on the left were – sometimes reluctantly – for Remain, usually focusing this decision on the need to oppose racism and national chauvinism, which overrode any other considerations about the negative role of the EU. This was a position with which I disagreed, but which I respected for obvious reasons, since no one could be complacent about the racist and nationalist arguments which accompanied the referendum debate, and because I shared the view of many of those people that immigration was not a problem – in fact, it is a benefit to British society in countless ways.

That the referendum ended in a Leave vote didn’t surprise me, although I did think that after the murder of Jo Cox there would be a rise in support for the Remain camp. Maybe there was, but it was not sufficient to win that side victory. It was also clear to me that, while immigration played a role in the vote, it was overwhelmingly a vote against the establishment politicians who had given us austerity and misery over the previous years. That doesn’t mean it was necessarily progressive – there is no question that there were many confused, contradictory and sometimes reactionary ideas which motivated the vote. But it was a cry of pain, rage and incomprehension from large numbers of working class and poor people.

The result immediately led to an attack by Labour’s right on Jeremy Corbyn, an attack which led to a pointless and futile leadership challenge. The knives were out again for Corbyn when the election was called last year, with predictions of doom from many parts of the PLP (*) (who can forget the humiliating documentary where Stephen Kinnock, Lucy Powell and Ruth Cadbury – all poised to bury Corbyn – were astounded at their own success). While the increase in Labour votes and seats held them back, the right have now regrouped around the central question (for them) of stopping Brexit.

Chukka Umunna, Heidi Alexander, Alastair Campbell, are all leading the charge to reverse the democratic decision made in June 2016 and keep Britain in the EU. They are doing much better than they should be, ably assisted by the Guardian which dutifully reports 17,000 emails calling for Corbyn to effectively change his position on the single market and customs union. Out of a membership of 600,000 this isn’t exactly decisive, especially since email lobbying tools are fairly common. But it is designed to put pressure on Corbyn, who this week has a Labour leadership away day to discuss the matter. I guess he will find it hard to hold the line, given the politics of those closely involved, such as Keir Starmer, as well as the wider pressure from establishment and media.

Agreeing to a change of policy would, however, be a major mistake. It would destroy the current position, which has done Labour well in terms of trying to unite the different views within its own party, and which did it no harm in the elections. Indeed, the most strongly pro-Remain parties, the Lib Dems and the Greens, did badly last June. Worse, it would once again create the space for the far right to grow, campaigning on the basis of the betrayal of Brexit. This prospect seems to hardly bother the likes of Progress and the Blairites, but should make any socialist stop short before agreeing to such an outcome.

Because staying in the single market or customs union would in effect negate the point of the referendum since it would effectively mean the status quo. A second referendum, which many of these same people advocate, would be disastrous politically because its outcome would be stalemate – a narrow majority one way or the other, and increased bitterness among Leave voters if their position was reversed.

It would also represent a weakening of the Labour left and probably precipitate further attacks on Jeremy. The Labour right see it as a wedge issue which can break Corbyn supporters from Corbyn, and they will do everything to make that happen. This is, therefore, a potentially dangerous moment.

For the left, there are some serious challenges. One is to keep insisting that many of the problems facing working class people in Britain – housing, health, education, low pay and poor conditions – have nothing to do with Brexit, and demand solutions regardless of the Westminster obsession with this question.

The other is to look at the reality which is the EU. It is not the antithesis of Brexit Britain, but an institution which is driving and reinforcing many of the problems across Europe, from the refugee crisis to worsening work conditions, to a growing militarism. While it is continuing to penalise Greece, it turns a blind eye to far-right politics in Poland and Hungary, and looks like endorsing the return of Silvio Berlusconi in next month’s Italian election.

It is exactly the politics put forward by Corbyn which can provide an alternative to the neoliberalism which dominates Europe. The EU leaders are united in opposing these politics and in doing everything they can to prevent them from succeeding.