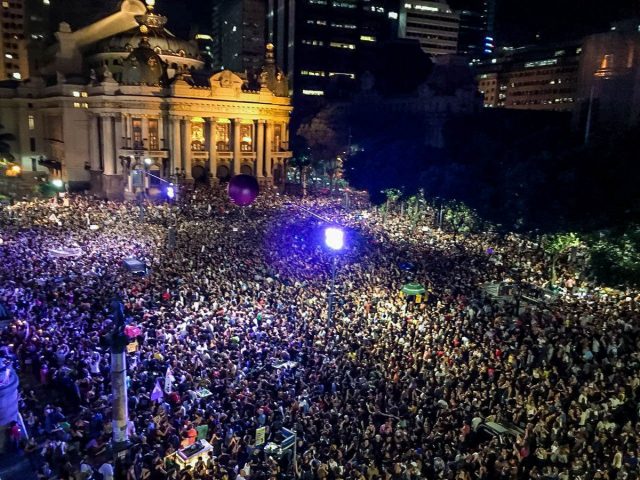 The story of Marielle Franco and other women who have been murdered, as well as the history of young people and peasants who have had the same destiny, shows the big risk of claiming rights and citizenship in many regions of Latin America.

Many times, the person who is labeled as an outsider may have a different view of the matter. He/she may not accept the rule by which he/she is being judged and may not regard those who judge. Probably, the story of Marielle Franco, the Brazilian human rights activist who was murdered in Rio de Janeiro, is like this.

But it is also a story that has been repeated in several countries of Latin America. A lot of people have been persecuted and killed in this region just because they defend their rights. For example, the deaths of peasants and young people demonstrate a typical situation of societal fascism in some parts of Latin America.

As the sociologist Boaventura Santos has pointed out, societal fascism is a set of social processes by which large population bodies are irreversibly kept outside or thrown out of any kind of social contract. They are rejected, excluded and thrown into a kind of Hobbesian state of nature, either because they have never been part of any social contract and probably never will; or because they have been excluded or thrown out of whatever social contract they had been part of before.

As a societal regime, fascism manifests itself as the collapse of the most trivial expectations of the people living under it, and it promotes actions of savagery on a growing scale. From a historical-sociological point of view, what we call society is a bundle of stabilized expectations from the subway schedule to the salary at the end of the month or employment at the end of a college education. Expectations are stabilized by a set of shared scales and equivalences: for given work a given pay, for given risk a given insurance. The people that live under societal fascism are deprived of shared scales and equivalences and therefore of stabilized expectations. They live in a constant chaos of expectations in which the most trivial acts may be met with the most dramatic consequences. As Polanyi predicted several years ago, one possible future is, unfortunately, the spread of societal fascism. In regards to this, it is very revealing that the President of a country like the United States supports the idea of providing weapons to schools and considers immigrants to be inferior people.

In the past, fascism was a political regime; the state itself became fascist. Actually, it’s different, now social relations may become so; the danger is the rise of fascism as a societal regime.

The story of Marielle Franco and other women who have been murdered, as well as the history of young people and peasants who have had the same destiny, shows the big risk of claiming rights and citizenship in many regions of Latin America. It is a risk produced by several factors; but, in recent times, societal fascism and external interference in countries of the region have generated an increase of levels of social instability in Latin American nations. The perception of external interference in the region is not the outcome of any conspiracy theory. On the contrary, it is the result of the finding of a concrete fact in the context of the global geopolitical dispute involving Latin America. In this way, there are pieces of evidence that allow an objective analysis to reject the idea of mere coincidence in many political and economic events in these times.

In 1891, José Martí published an essay called Nuestra América (‘Our America’). For Martí, Nuestra América is at the antipodes of Anglo-Saxon America. It is the America mestiza. He affirmed: “There is no race hatred because there are no races”. This sentence anticipates the idea that “Latin America is a small humankind, a miniature humankind.” In 1928, Brazilian poet Oswald de Andrade published his Anthropophagous Manifesto, and emphasized: “Only what is not mine interests me. The human adventure. Earthly finality”.

The “contextualized cosmopolitanism” of such thoughts, as a historical expression of Latin American identity, is the bearer of hope for the conquest of rights and, at the same time, it is the guardian of the memory of the many Marielle Franco’s. The achievement of rights (and their maintenance) is the most important political task of the next decades in Latin America.

Ivonaldo Leite is a sociologist at the Universidade Federal da Paraíba, Brazil.

Cover photo: Mobilisation in Rio after the murder of Marielle Franco (from TeleSur English Twitter)