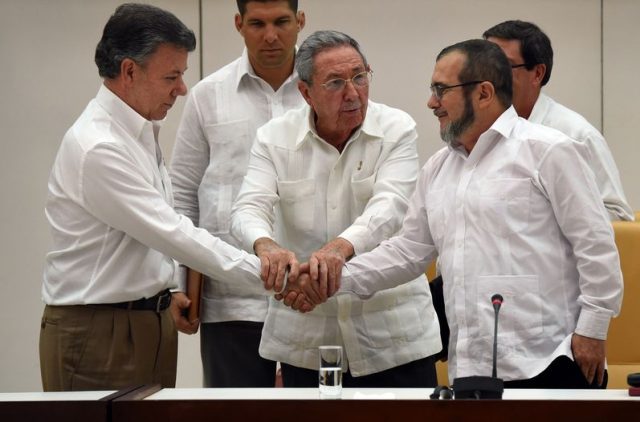 September 26, 2017, was a historic day in Colombia: the government of Juan Manuel Santos and the Revolutionary Armed Forces of Colombia (FARC) signed a peace agreement, putting an end to over 50 years of civil war. We talked to Enrique Santiago, legal counsel of the FARC, about the implementation of the agreement and future challenges in this process.

Raffaele Morgantini: The conflict between the Colombian government and the FARC seems to belong to a bygone era, if we ignore the extra-judicial assassinations of former guerrilla members and social leaders. That being said, how far along has the implementation the peace agreements come? And secondly, can we say that the deep causes for the conflict are being adequately addressed?

Enrique Santiago: The peace deal between the Colombian government and the FARC rests on five essential points. I think it is important to analyse these points in detail in order to get a global perspective of the situation and to understand the challenges that remain before a comprehensive peace can be achieved.

At the same time, we should recall that a second peace agreement is being negotiated in Quito (Ecuador) between the Colombian government and the ELN (National Liberation Army). The previous accords between the government and the FARC, their consequences and implementation, will have a tremendous influence on this second agreement. In that sense, it is of vital importance that the challenges to a real implementation of peace be analysed in detail.

The first point of the agreement is the question of rural reform. It is tremendously important to understand that to talk about the rural question, the question of access to land, is to talk about the root of the conflict. The Colombian guerrilla forces took up arms because of the unequal land distribution and the difficulty in having access to land. It is the main structural cause of the conflict.

The peace deal foresees a democratisation of the access and use of land, through different mechanisms, such as a land fund, the formalisation of property titles in favour of small peasants, the creation of rural development programs and plans for infrastructure, healthcare, education, technical assistance. These measures would allow for a reduction of poverty and marginalisation in the rural areas.

Nevertheless, until now, one year after the agreements were signed, no legislation, no proposed legislation, has been seen from the authorities in this direction. The land question remains the major structural issue of the country, which is demonstrated by the ongoing practices of land occupation from the part of paramilitary groups or multinational corporations.

The second point, which is another key structural issue, concerns political participation. The obstacles to the participation of social movements, trade unions, peasant organisations, etc., is undoubtedly another major cause of the armed conflict. The agreement recognises the need to adopt political/electoral reforms, offering full guarantees for the exercise of political opposition and democratic mechanisms for citizen participation.

The fourth point is the solution of the drug trafficking problem and the replacement of illegal crops. And the last one has to do with the victims and the setting up of a peace jurisdiction to guarantee the rights of the victims of the conflict and put an end to impunity. As we know, the paramilitary crimes are the ones that enjoy the largest amount of impunity. The prosecutor’s office justifies this with a lack of financial means, but at the same time it is the public office with the largest budget.

In general, there are significant delays in the implementation of the peace agreement. Up to this moment only 20% of the necessary legislation to ensure the bare minimum of its content has been implemented.

How do you explain this lack of implementation? Is it a matter of (lack of) political will, in the context of the structural problems that plague Colombian politics?

Since the beginning of 2017, the most optimistic reports speak of 100 social leaders assassinated. If we talk exclusively of former guerrilla members that laid down their weapons, the figure is of more than 20 assassinated, always with total impunity.

Then it is a matter of calling the glass half-full or half-empty. These numbers are unacceptable. But still, when compared to the record of violence during other times and previous peace negotiation environments, for example during the 1990s when the Patriotic Union was exterminated, these figures now are lower than the figures for crimes and murders in other periods.

A major problem has surely been the lack of application of amnesty laws. Up until now, the FARC have delivered by handing over their weapons, but the state has not fulfilled with its minimum obligations in return. We should stress that in no other peace process have we seen such diligence in laying down weapons, with no incidents or violence. The FARC have absolutely delivered their end of the bargain. The United Nations monitoring program announced in a report that the amount of dissidence in guerrilla ranks was very low. The rates of dissidence in conflicts are usually between 15-20%, and the reports mention that the dissidence among the FARC has no reached 5%.

However, there is a serious non-compliance from the part of the government, which may have serious and very negative implications in the future, if bringing an end to political violence is not correlated with bringing an end to social violence. In other words, that scenarios such as the ones witnessed in Central America, for example after the Contadora Agreements, are repeated. Today in El Salvador the rate of political assassinations is higher than during the civil war. This is the consequence of a deficient implementation of sincere and effective policies of social and economic reincorporation, and of eradication of political violence. For this peace agreement in Colombia this is an indispensable step to avoid repeating these kinds of mistakes.

Can you give us an example of these political shortcomings from the part of the Colombian government?

To give an idea, the Colombian government has not made available even a single acre of land for an ex-guerrilla, and this taking into account that the FARC had over 90% of its members from a peasant background. To this date, the government has not approved any program of social and economic reincorporation, especially productive ones, whereas back on August 15 all the weapons were handed over. They are now in the reincorporation areas doing nothing.

The only thing that the government has agreed to is some direct aid in the form of pensions for a two-year period, the equivalent of 80% of the minimum wage. This is something like 600.000 pesos (200 euros) per month, an amount that is certainly not enough to kickstart a productive project or even to survive. This situation is even more dangerous in areas where there is illegal economy, smuggling, drug trafficking, in which there are considerable offers being made by criminal groups to former guerrillas, offers that are far higher than what the government is paying them.

The Colombian government is not investing in peace. At the moment, this supposed peace has been very cheap. This decision has obvious nefarious consequences for the effectiveness of the implementation of the peace deal. If we conjugate this to other problems, such as not setting up rural reform, the lack of political will to tackle paramilitarism, then the conclusion is that there is a lack of sincerity and responsibility, and in this regard the international community needs to have a clear voice and a clear position.

What is the current situation in what concerns the amnesty law, a very important matter in post-conflict scenarios?

On this issue there have been significant misunderstandings, especially on the part of human rights organisations and in particular the office of the UN High Commissioner for Human Rights in Colombia. Unlike the position taken by the UN monitoring mission, the office of the High Commissioner’s attitude has been lacking, confusing and unhelpful in moving forward in this very important legislation.

The Geneva Convention, in article 6.5 of its second additional protocol, establishes clearly that, after the end of an internal armed conflict, authorities should establish amnesty as far as possible, obviously within the limits set by international law in what concerns amnesty (in no condition are international crimes eligible for any amnesty).

In the context of the current agreement, the amnesty law 1820 from December 30, 2016, drawn up by the authorities, meets all these international standards that I have mentioned. Out of the 84 amnesty laws or programs existing in Colombia since its independence, this latest one is the only one that sets out a long list of crimes that are not eligible for amnesty. The most current laws forbid that amnesty be granted for crimes with an undetermined judicial concept. For example, in cases of kidnapping or other atrocious crimes, which do not have a peaceful definition under international law.

In your opinion what is the biggest challenge facing this process?

It is undoubtedly the setting up of the Special Jurisdiction for Peace, in other words the model of transitional justice that envisions the creation of institutional organs to effectively administer justice, reparations to the victims and ensuring non-repetition. This challenge is related to the necessary establishment of institutions that ensure safety from the crimes of the paramilitary groups, which represent the biggest threat to the peace agreement.