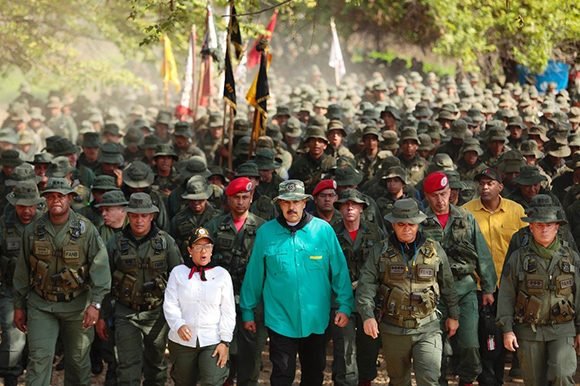 On April 30, 2019, the Bolivarian Revolution defeated the latest in a series of attempted U.S.-orchestrated coups d’états since the inaugural one on January 23, when Guaidó was recognized as President by Washington.

One of the main pretexts being used for the U.S. intervention is that the May 2018 presidential elections were supposedly steeped in electoral irregularities and therefore deficient. Thus, Maduro was, according to this false narrative, not elected democratically.

However, in a twist of irony, it is the very U.S. interventionist activities – ongoing and supported by the Lima Group – that resulted in the ratification of Maduro as President. Since January 23, Venezuelans in the millions have marched and demonstrated innumerable times all across the country in support of Maduro as President and the Bolivarian Revolution he embodies. The detractors may scoff at this manifestation of political expression as not conforming to the acceptable norms of democracy, let alone electoral procedures.

However, millions of Venezuelans have continuously – for close to three months – voted with their feet and their voices. Can this experience replace actual voting in a ballot box? obviously, it cannot replace the formality. Nonetheless, the ongoing “voting in the streets and workplaces” is even more meaningful than a simple deposit in a ballot box. In fact, on May 4 the Venezuelans armed forces “went to the polls” once again to ratify what they voted for in May 2018.

It is only poetic justice that Maduro has strengthened his position as the legitimate President despite, or rather as a result of, the U.S. Maduro and the government know this; so does the U.S. However, the U.S. cannot afford to admit it, as it challenges the U.S.-centric view that people do not want socialism and revolution, which is supposedly forced upon the people despite their will.

In addition to an electoral procedure serving as an excuse for U.S. intervention, the charge that Maduro and the government are “authoritarian” at best, or a dictatorship, irrespective of how he was elected also serves as a pretext. Why has the U.S. not been able to overthrow the Maduro government? Is it because it is a dictatorship? No, if it were indeed a dictatorship, it would be relatively easy for the U.S. to win over the people, with a dose of naïveté, to free themselves from their “oppressors.”

The U.S. could not succeed because of the civic–military union. Despite all the attempts, including the latest one on April 30, it remains not only fully intact, but its consciousness, patriotism and military strength have all been strengthened.

The fact that the already broad armed alliance is continuously sinking its roots yet further into the communities that are arming themselves (at their own request) makes what would normally be applauded as democratization seen as another proof of dictatorship.

The U.S. is pitted against this force. Can the U.S. and its puppet offer democracy? Its stated goal is to convert Venezuela into an economic and political satellite of the U.S. In the face of this, the civic–military alliance and the Maduro government are the guarantee of democracy for the majority of Venezuelans.

Thus, in yet another twist of irony, the very government that has been dubbed a dictatorship, as a result of U.S. policy, is on a daily basis acting – and more importantly, being seen by millions of Venezuelans – as the instrument of democracy for Venezuela, and not the antithesis of it.

This consciousness is worth its eight in gold, and it is omnipresent in society, including the military. The U.S. claims it wants democracy for Venezuela, but the majority of Venezuelans are increasingly gripping on to their own government as the instrument for maintaining – and seemingly strengthening – democracy. Virtue is rewarded while infamy is punished. Moreover, the way the situation is evolving, the U.S. is destined to be punished time and time again, as it is blinded by its own self-serving, preconceived views on democracy.

The Bolivarian Revolution’s resistance to the ongoing U.S.-led economic and political war is going to be one of the most heroic chapters in post-World War II Latin American history. Today, millions of Venezuelans are writing history.

It is this very outcome that the critics of the Trump policy fear. Their only difference with Trump is their claim that his economic/political (and potential military) intervention is “counterproductive.” What does that mean? They fear what they call “polarization.” This is a liberal code word for the strengthening of Chavismo, which strikes fear in the hearts and minds of the “left” opposition.

The Bolivarian Revolution metes out poetic justice against all the accusations against it. It is turning the tables on history and on its accusers, all the while increasingly winning the support of people worldwide. This includes the people in the U.S. itself and in one of its main allies, Canada.

On the other hand, the U.S. government is increasingly isolated. It is lashing out like a mad dog and swinging widely, such as on Cuba, and in the process even further isolating itself on an international scale.