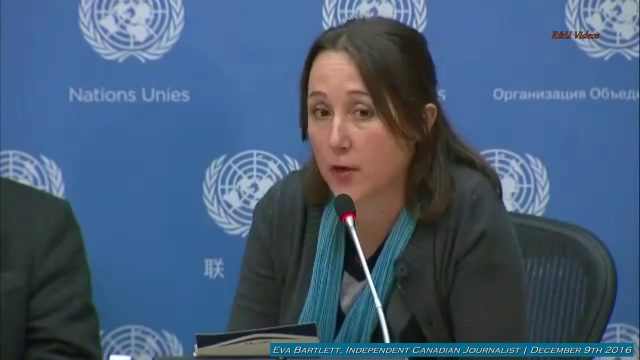 I am loath to draw more attention to the kind of idiocy that passes for informed comment nowadays from academics and mainstream journalists. Recently I lambasted Prof Richard Carver for his arguments against BDS that should have gained him an F for logic in any high school exam.

Now we have to endure Brian Whitaker, the Guardian’s former Middle East editor, using every ploy in the misdirection and circular logic playbook to discredit those who commit thought crimes on Syria, by raising questions both about what is really happening there and about whether we can trust the corporate media consensus banging the regime-change drum.

Whitaker’s arguments and assumptions may be preposterous but sadly, like Carver’s, they are to be found everywhere in the mainstream – they have become so commonplace through repetition that they have gained a kind of implicit credibility. So let’s unpack what Whitaker and his ilk are claiming.

Whitaker’s latest outburst is directed against the impudence of a handful of British academics, including experts in the study of propaganda, in setting up a panel – the Working Group on Syria, Propaganda and Media – to “provide a source of reliable, informed and timely analysis for journalists, publics and policymakers” on Syria. The researchers include Tim Hayward of Edinburgh University and Piers Robinson of Sheffield University.

So what are Whitaker’s objections to this working group? Let’s run through them, with my interjections.

Whitaker: They dispute almost all mainstream narratives of the Syrian conflict, especially regarding the use of chemical weapons and the role of the White Helmets search-and-rescue organisation. They are critical of western governments, western media and various humanitarian groups but show little interest in applying critical judgment to Russia’s role in the conflict or to the controversial writings of several journalists who happen to share their views.

Western governments and western corporate media have promoted a common narrative on Syria. It has been difficult for outsiders to be sure of what is going on, given that Syria has long been a closed society, a trend only reinforced by the last seven years of a vicious civil-cum-proxy war, and the presence of brutal ISIS and al Qaeda militias.

Long before the current fighting, western governments and Israel expressed a strong interest in overthrowing the government of Bashar Assad. In fact, their desire to be rid of Assad dates to at least the start of the “war on terror” they launched after 9/11, as I documented in my book Israel and the Clash of Civilisations.

Very few corporate journalists have been on the ground in Syria. (Paradoxically, those who have are effectively embedded in areas dominated by al Qaeda-type groups, which western governments are supporting directly and through Gulf intermediaries.) Most of these journalists are relying on information provided by western governments, or from groups with strong, vested interests in Assad’s overthrow.

Should we take this media coverage on trust, as many of us did the lies promoted about Iraq and later Libya by the same western governments and corporate media? Or should we be far more wary this time, especially as those earlier regime-change operations spread more chaos, suffering and weapons across the Middle East, and fuelled a migrant crisis now empowering the far-right across much of Europe?

Whitaker and his ilk are saying we should not. Or more disingenuously, Whitaker is saying that the working group, rather than invest its energies in this supremely important research, should concentrate its limited resources on studying Russian propaganda on Syria. In other words, the researchers should duplicate the sterling efforts of Whitaker’s colleagues in daily attributing to Russian President Vladimir Putin the superpowers of a James Bond villain.

Here’s a counter-proposal: how about we leave well-funded western governments and media corporations to impugn Putin at every turn and on every pretext, while we allow the working group to check whether there is a large (larger?) mote in the west’s eye?

Whitaker: The worrying part, though, especially in the light of their stated intention to seek ‘research funding’, is their claim to be engaging in ‘rigorous academic analysis’ of media reporting on Syria.

Is this really so worrying? Why not allow a handful of academics to seek funds to try to untangle the highly veiled aid – money and arms – that western governments have been pumping into a war tearing apart Syria? Why not encourage the working group to discern more clearly the largely covert ties between western security services and groups like the White Helmets “search-and-rescue service”? One would think supposedly adversarial journalists would be all in favour of efforts to dig up information about western involvement and collusion in Syria.

Whitaker: But while members of the group are generally very critical of mainstream media in the west, a handful of western journalists — all of them controversial figures — escape similar scrutiny. Instead, their work is lauded and recommended.

Further, these “controversial” journalists are not being “lauded”. Rather, their counter-narratives are being highlighted by those with open minds, like those in the working group. Without efforts to draw attention to these independent journalists’ work, their reporting would most likely disappear without trace – precisely the outcome, one senses, Whitaker and his friends would very much prefer.

It is not the critical thinkers on Syria who are demanding that only one side of the narrative is heard; it is western governments and supposedly “liberal” journalists like Whitaker and the Guardian’s George Monbiot. They think they can divine the truth through … the corporate media, which is promoting narratives either crafted in western capitals or derived from ties to groups like the White Helmets located in jihadist-controlled areas.

Again, why should the working group waste its finite energies scrutinising these independent journalists when they are being scrutinised – and vilified – non-stop by journalists like Whitaker and by big-budget newspapers like the Guardian?

In any case, if official western naratives truly withstand the working group’s scrutiny, then the claims and findings of these independent journalists will be discredited in the process. These two opposed narratives cannot be equally true, after all.

Whitaker: The two favourites, though, are Eva Bartlett and Vanessa Beeley — ’independent’ journalists who are frequent contributors to the Russian propaganda channel, RT. Bartlett and Beeley also have an enthusiastic following on ‘alternative’ and conspiracy theory websites though elsewhere they are widely dismissed as propagandists.

“Widely dismissed” by … yes, that’s right, Whitaker’s friends in the corporate media! More circular logic. Independent journalists like Bartlett and Beeley are on RT because Whitaker’s chums at British propaganda outlets – like the Guardian and BBC – do not give, and have never given, them a hearing. The Guardian even denied them a right of reply after its US-based technology writer Olivia Solon (whose resume does not mention that she was ever in Syria) was awarded a prominent slot in the paper to smear them as Kremlin propagandists, without addressing their arguments or evidence.

Whitaker: [Bartlett and Beeley’s] activities are part of the overall media battle regarding Syria and any ‘rigorous academic analysis’ of the coverage should be scrutinising their work rather than promoting it unquestioningly.

There is no “media battle”. That’s like talking of a “war” between Israel, one of the most powerful armies in the world, and the lightly armed Palestinian resistance group Hamas – something the western corporate media do all the time, of course.

Instead there is an unchallenged western media narrative on Syria, one in favour of more war, and more suffering, until what seems like an unrealisable goal of overthrowing Assad is achieved. On the other side are small oases of scepticism and critical thinking, mostly on the margins of social media, Whitaker wants snuffed out.

The working group’s job is not to help him in that task. It is to test whether or how much of the official western narrative is rooted in truth.

Returning to his “concerns” about RT, Whitaker concludes that the station’s key goal:

is to cast doubt on rational but unwelcome explanations by advancing multiple alternative ‘theories’ — ideas that may be based on nothing more than speculation or green-ink articles on obscure websites.

But it precisely isn’t such “green-ink” articles that chip away at the credibility of an official western consensus. It is the transparently authoritarian instincts of a political and media elite – and of supposedly “liberal” journalists like Whitaker and Monbiot – to silence all debate, all doubt, all counter-evidence.

Because at heart he is an authoritarian courtier, Whitaker would like us to believe that only crackpots and conspiracy theorists promote these counter-narratives. He would prefer that, in the silence he hopes to impose, readers will never be exposed to the experts who raise doubts about the official western narrative on Syria.

That is, the same silence that was imposed 15 years ago, when his former newspaper the Guardian and the rest of the western corporate media ignored and dismissed United Nations weapons experts like Scott Ritter and Hans Blix. Their warnings that Iraq’s supposed WMD really were non-existent and were being used as a pretext to wage a disastrous colonial war went unheard.

Let’s not allow Whitaker and like-minded bully-boys once again to silence such critical voices.