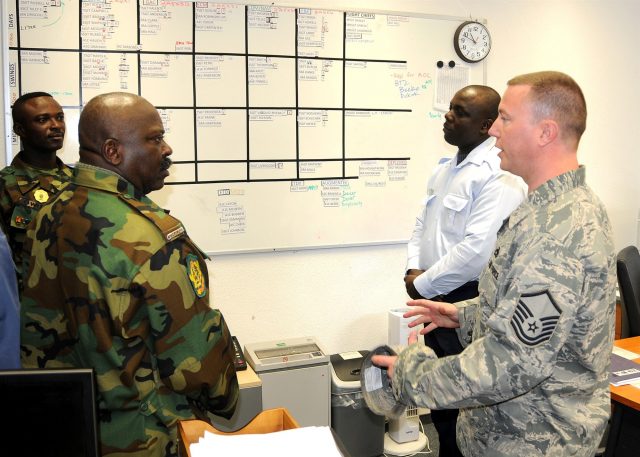 The root causes of the conflicts are the same as elsewhere: environmental destruction, joblessness, war.

On October 4th, US military personnel were on their way back to their forward operating base in Niger. They had been on a reconnaissance mission to the village of Tongo Tongo, near Niger’s border with Mali. US Joint Chiefs Chairman General Joseph Dunford says that fifty ISIS fighters ambushed them. The soldiers did not call for air support for the first hour, said General Dunford, thinking perhaps that they could handle the attack. By the time the drones came along with French fighter aircraft, ISIS had disappeared.

Tongo Tongo is in the middle of a belt that is ground zero for the illicit trade that defines the Sahara. West of Tongo Tongo is Gao (Mali) and to its east is Agadez (Niger). These are the main ports for South American cocaine, flown in on various kinds of aircraft (Air Cocaine, as they are called) and then driven across the Sahara Desert in trucks to be taken by small boats across the Mediterranean Sea into Europe. Evidence of the cocaine trade is everywhere – whether in Gao’s neighborhood known as Cocaine Bougou or in the nickname of one of the leading chiefs in Agadez – Cherif Ould Abidine – known as Cherif or Mr. Cocaine.

Cocaine is one dramatic commodity. There are others: refugees and guns. This belt of towns just below the Sahara played a historic role as caravanserais for the old trades in gold, salt and weaponry. The creation of nation-states closed off some of these routes. In particular, Libya – under the previous regime of Muammar Gaddafi – largely shut down the illicit commerce from Mali and Niger. NATO’s war against Libya, which created chaos in that country, opened these routes up. Fleets of white Toyota trucks arrived in the desert to carry refugees and drugs to Europe and to bring weapons into central and western Africa. The trucks run from Agadez to Sabha (Libya) before they find their way to the port cities. There are several kinds of refugees – the adventurers (les aventuriers), many single young men who are leaving behind deserts of opportunity for Europe, and war refugees. Both are desperate, fodder in the hands of the smugglers who must get them – and the drugs – across the forbidding sands.

Firmly opposed to the refugee traffic across the Mediterranean, the European Union (EU) has joined hands with governments in Niger and elsewhere to make this southern border of the Sahara their frontier. Niger passed a draconian law in 2015 against smuggling. The EU provided funds to Niger’s military and police, which have started an all-out war against the smugglers. In 2016, Niger arrested over a hundred smugglers and confiscated their vehicles. People in towns like Agadez, a World Heritage site for its beautiful red buildings, say openly that they are vulnerable to extremist groups. There are many to chose from – al-Qaeda in southern Mali and southern Algeria, ISIS in southern Libya and Boko Haram in northern Nigeria and into areas near Lake Chad. No wonder that the United States calls the belt from Mali through Niger the ‘ring of insecurity.’

It is notable that the pressure on the traffickers has not decreased the terrible situation for the refugees and the ‘adventurers.’ They continue to come for reasons that have nothing to do with an open border or a closed border. But the new military presence has meant – as the International Organisation of Migration says – that the smugglers are abandoning the refugees at the first sign of trouble in the dangerous desert. The United Nations has rescued over a thousand abandoned refugees and many hundreds are said to have died along this route. The Nigerien Red Cross says that one group of forty refugees died in May when their truck broke down. It is legible to believe that the death count will never really be known as the European border moves south, from the northern edge of the Mediterranean to the southern edge of the Sahara.

Five hours drive north of Agadez is the town of Arlit, one of the key sources of uranium. Readers might remember that the United States had accused Saddam Hussein’s government of procuring yellowcake uranium from Niger. This turned out to be a hoax, uncovered by Ambassador Joe Wilson when he went to Niger and met its former Prime Minister Ibrahim Assane Mayaki. The accusation against Iraq was false, but the Arlit mines are real. The town is a fortress of European mining companies, from Niger’s own government company to a series of French firms, most prominently Areva. The road out of Arlit is known as Uranium Highway. It is this road that was used by al-Qaeda in the Islamic Maghreb when it came and kidnapped five French employees of an Areva mine in 2010. The Areva mines were also attacked by a car bomb in 2013. French Special Forces operate to protect these mines and the close to two thousand Europeans who live in this uranium town. ‘One of every three light bulbs is lit thanks to Nigerien uranium,’ noted Oxfam in 2013. It is too precious for the French to be ignored. That is why France’s Operation Barkhane runs from across the Sahel, from Mauritania at one end to Chad at the other. It has its headquarters in Chad’s capital of N’Djamena.

The French are not alone. The Americans not only have thousands of troops across Africa, but also have many bases. The most public base is in Djibouti (Camp Lemonier), but there are also bases in Ethiopia and Kenya as well as forward operating positions across the Sahel. The United States is also building a massive base at the cost of $100 million in Agadez. Air Base 201 will be mainly a drone base, with the MQ9 Reapers flown out of Agadez to collect intelligence in this resource-rich and poverty-stricken area. This base is being constructed in plain sight

It is, therefore, surprising to hear Senator Lindsey Graham – who is on the Committee on Armed Services – say, ‘I didn’t know there were 1000 troops in Niger.’ He meant US troops.

There has been no evidence presented to the public that those who killed the US forces near Tongo Tongo were from ISIS. Privately US intelligence officials say that this is a guess. They are not sure about the combatants. In fact, US Africa Command (AFRICOM) official concur, saying that it is ‘inappropriate’ to speculate about the incident and those who attacked the US forces.

There is a particularly dangerous soup at work here. Certainly extremist groups operate in the region, such as the militants who freed over a hundred prisoners from a prison in Mopti (in central Niger). The dreadful desiccation of the Sahel has produced various feuds amongst herder communities in eastern Niger, where these have morphed into ethnic conflicts (and where certain groups – such as the Mohamid and Peuls – have used the opportunity to accuse the Boudouma of being, therefore, part of Boko Haram). Such opportunism was frequently used in Afghanistan, where tribes used American airpower to settle scores with their old adversaries (to blame someone for being Taliban was sufficient to call in an air strike).

The root causes of the conflicts are the same as elsewhere: environmental destruction, joblessness, war and the commodities (such as Cocaine and Uranium) that are essential to the West. None of this will be addressed. More troops will arrive in Niger. More destruction will follow. More sorrow. More anger. More war.

There will be no interest in the newly formed North African Network for Food Sovereignty (formed in Tunis on July 5th) and in its sensible charter of demands. Nor will there be any reflection on the assassination of hope for the Sahel, when Thomas Sankara – president of Burkina Faso – was killed thirty years ago on October 15th. ‘We must dare to invent the future’, said Sankara. What is before us from the American and French Special Forces and the militaries of Niger and Chad is not the future. It is wretched.

Vijay Prashad is the Chief Editor of LeftWord Books (leftword.com) and the Director of Tricontinental: Institute for Social Research. He is the author of 20 books, the most recent being The Death of a Nation and the Future of the Arab Revolution(University of California Press, 2016).