Syrian War Propaganda at the Oscars 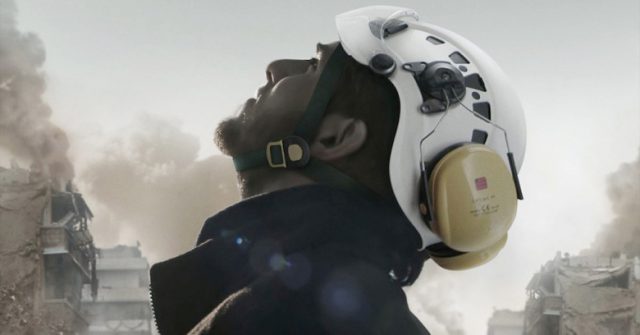 The Western-backed war in Syria, like the invasion of Iraq, was so smothered by propaganda that truth was not only the first casualty but has been steadily suffocated for five years, now reaching the Oscars, says Rick Sterling.

Note from Investig’Action: “The White Helmets” did win the Oscar to cap off this remarkable propaganda campaign.

The Netflix movie “The White Helmets” may win an Oscar in the “short documentary” category at the Academy Awards on Sunday. It would not be a surprise despite the fact that the group is a fraud and the movie is a contrived infomercial.

Awarding “The White Helmets” an Oscar would fit with the desire of Hollywood to appear supportive of “human rights,” even if that means supporting a propaganda operation to justify another bloody “regime change” war in the Middle East.

Much of what people think they know about the White Helmets is untrue. The group is not primarily Syrian; it was initiated by British military contractor James LeMesurier and has been heavily funded (about $100 million) by the U.S., U.K. and other governments. The White Helmets are not volunteers; they are paid, which is confirmed in a Al Jazeera video that shows some White Helmet “volunteers” talking about going on strike if they don’t get paid soon.

Still, most of the group’s heavy funding goes to marketing, which is run by “The Syria Campaign” based in New York. The manager is an Irish-American, Anna Nolan, who has never been to Syria. As an example of its deception, “The Syria Campaign” website features video showing children dancing and playing soccer implying they are part of the opposition demand for a “free and peaceful” Syria. But the video images are taken from a 2010 BBC documentary about education in Syria under the Baath government.

There is also something almost dated about the Academy selecting this infomercial as an Oscar finalist, let alone the possibility of giving it the award. It’s as if the Syrian propaganda narrative of “good” rebels vs. “bad” government was still viable. In the case of the White Helmets, they were literally made into “white hats” bravely resisting the government’s “black hats.”

Yet, we now know that the propaganda around the “noble” rebels holding out in east Aleppo – with the help of the White Helmets – was largely a lie. The rebels mostly fought under the command structure of Al Qaeda’s Nusra affiliate and its fellow jihadists in Ahrar al-Sham. A video shows White Helmet workers picking up the corpse of a civilian after execution by Nusra/Al Qaeda and celebrating the extremists’ battle wins.

Western “human rights” groups touted not only the White Helmets but the “moderate rebels” who we now know were largely a P.R. cover for the terrorists and jihadists, as well as an excuse for the U.S. and its allies to funnel in weapons that were then turned over to the extremists.

Soon after departing Aleppo in government-supplied buses, the White Helmets showed up in the mountains above Damascus where they allied with terrorist groups responsible for poisoning and then shutting off the water source for five million people in Damascus.

Neither Neutral Nor Independent

The White Helmets’s claim to be neutral and independent is another lie. They only work in areas controlled by the rebel groups, primarily Al Qaeda’s Nusra, and their leaders seek to bring in direct U.S. and NATO military intervention to assure a “regime change” in Syria although it likely would create a vacuum that the extremists would exploit to the further suffering of the Syrian people.

The film is as fraudulent as the group it tries to turn into heroes. The filmmakers never set foot in Syria. Their video footage takes place in southern Turkey where they show White Helmet trainees in a hotel and talking on cell phones. The footage from inside Syria is not from independent journalists but from the White Helmets themselves – and much of it looks contrived.

Khaled Khatib, the White Helmets’s photographer who says he filmed the footage inside Syria, reportedly received a U.S. visa and will attend the Oscars. Khatib tweeted the first video he took showing the White Helmets, with a girl who was totally buried being removed without injuries or wounds or even much dirt.

The original video has the logo of Aleppo Media Center (AMC), which was created by the Syrian Expatriates Organization. Their address on K Street in Washington DC suggests this is yet another Western-funded operation similar to the Iraqi National Congress that lobbied and lied on behalf of the 2003 invasion of Iraq.

In the past few days, with perfect timing for the upcoming Oscars, there was yet another “miracle” rescue, another girl buried but then removed and whisked away in record-breaking time – perfect for social media.

The momentum in support of the White Helmets infomercial raises a question about how this Oscar is awarded. Is it for journalistic authenticity or is it to conform with the political passions of the moment, which themselves are partly contrived by a well-funded propaganda campaign mounted by Western/Israeli/Gulf governments.

According to on-the-ground interviews in Aleppo, militants began supplying this operation by killing real Syrian rescue workers and stealing their equipment. Since then the White Helmets have been supplied by the West through Turkey with brand new ambulances and related rescue equipment.

Despite exposés about the group, the West’s mainstream media and some “alternative” outlets continue to uncritically promote the White Helmets myth and rely on the group as a source of news about Syria. In 2014-2015, the White Helmets became a rallying point for columnist Nicholas Krisof, the activist group Avaaz and others to campaign for all-out Western assault on the Syrian government and its military.

Perhaps ironically – given the Israeli government’s desire for a “regime change” in Syria – the Israeli mainstream TV program I24 presented both sides of the issue and titled the segment “White Helmets: Heroes or Hoax?” By contrast, the progressive program “DemocracyNow” in the United States has only broadcast a puff piece promoting the “White Helmet” disinformation.

Whether or not the White Helmets snag the Academy Award, they surely deserve recognition for their skillful marketing and advertising. In 2016, the group received the Rights Livelihood Award and was seriously considered for a Nobel Peace Prize. The Oscar nomination for “The White Helmets” movie is just the latest success in the ongoing campaign of distortion and deception around Syria.

Rick Sterling is an investigative journalist who lives in the San Francisco Bay Area. He can be reached at [email protected]