Strikes in Syria: ridiculousness does not harm the powerful 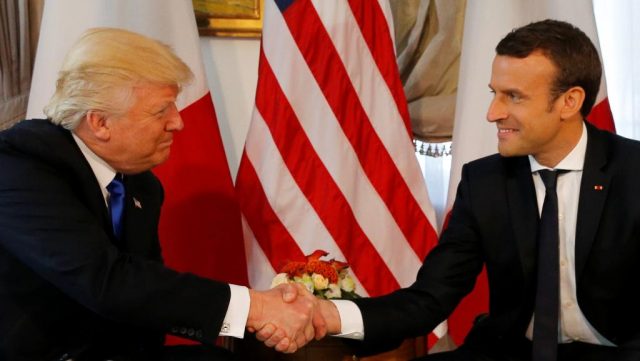 Trump’s ignorant delirium in the international arena in does not bother US allies, who are “always right” when it comes to Russia, China and most of the peoples of the South. The English Conservatives, whose Prime Minister is entangled in Brexit, the French Macronistes, small-time neo-Bonapartists in the domestic front but servile to the Americans in foreign policy, joined the US military intervention in Syria. What is more logical than bombing to protect civilians? What is more coherent than violating international law in order to ensure respect for it?

No Western interest can tolerate being swept aside: Russia is unforgivable for getting back on its feet with no need for American support and to have, without the West, gotten rid of ISIS in Syria!

Despite its yuan and its debts, China is not tolerable: how dare it rival the world’s foremost superpower, blessed by the Evangelical churches and their “universal” values?

In Syria, like elsewhere, the world is not allowed to change: only the West is “democratic”, only the West defends civilisation, which is to say its own! What could be more natural? This is the result of almost 400 years of wielding its hegemony all over the planet and believing everything is allowed, from the colonialism of yesteryear to current day meddling.

For good measure, Euro-America presents its own opinion as a victim whose very existence is in danger: despite the dollar and euro regulating international trade, and its ability to exploit the majority of economies worldwide, it complains of “unfair” competition from emerging powers while preaching competition (always skewed) as its main principle!

In spite of the United States’ military might (thanks to a budget around 10 times larger than Russia’s), the West paints itself on the defensive against Russian “aggression”, just like the Israeli occupation army claims to be defending itself against Palestinians “armed” with stones!

The most disgraceful cynicism was the invocation, by the French Defence minister, after the bombing of Syria on April 14, of international law!

French philanthropy knows no bounds: it is in the name of Humanity that the dastardly Syrians must be punishment, those vilest of monsters! Never mind the massive devastation wrecked by decades of multiple armed interventions in Afghanistan, Iraq, Libya, Yemen, to name a few, and the widespread massacres in sub-Saharan Africa that did not bother anyone: all the evil in the world is borne out of the evil Russia-Syria alliance. The close links between salafist extremists, the Muslim Brotherhood do not matter; the destruction of most Middle Eastern countries is besides the point… The Americans are definitely the good guys!

It matters little that sanctions precede negotiations, that punishment is dealt before anything is proven, despite the sacro-sanct “presumption of innocence” invoked in defence of all those with a license to steal in Europe and the US!

In Syria, in fact, the international commission from the OPCW that would investigate the alleged use of chemical weapons did not even have time to get there: western missiles were launched in advance! That was the surest way. Ridiculousness does not harm the powerful!

A certain penchant for violence and repression keeps on growing among Western oligarchies and their political representatives. These oligarchs make use of crises elsewhere to get rid of their own problems.

The extreme mediocrity of the elites in power (not to mention the savage vulgarity of someone like Trump!), under the cover of an individualisation that is only denounced when it concerns others, supported by a delirious enthusiasm from the mainstream media, has led to a growing confusion of public opinion, amidst a show of pseudo-democracy of constant bombardment and childish spectacle of leaders in a state of constant agitation!

It does not matter: Western powers have lost their war in Syria; Iraq massive debt increase under the cover of the IMF is laying the groundwork for restless days ahead; the Libyan people will not remain fragmented forever; the African peoples will not always be submissive!

As for Western citizens, they have known throughout history, despite the idle times, how to get rid of those who empty their pockets while trying to make fools out of them!