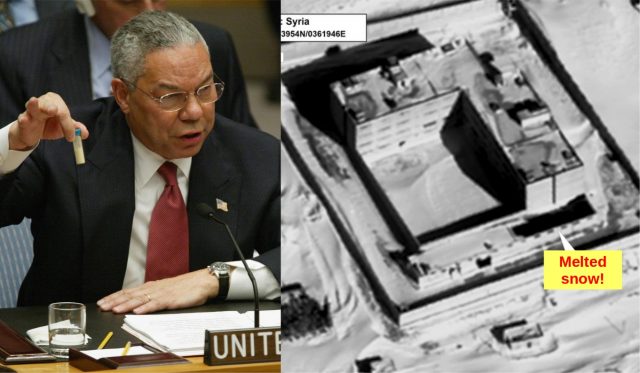 After the previous hit singles, “Russia hack 2016: take our word for it” and “Assad used sarin: bomb first, never ask questions”, US government agencies are at it again with their new chart-topping release “Bad guy did bad things, we saw it from space”. With journalism standards in the mainstream media at an all-time low, this is a sure bet to become a fake news hit!

On May 15th all the mainstream media screamed more or less the same bombshell headline, “State Dept. says Assad is burning people in a crematorium”. The source was a State Department press briefing which was then uncritically plastered everywhere. Assistant Secretary Stuart Jones claimed that the Syrian government had built a crematorium next to Saydnaya prison (more on this later), which was being used to burn 50 bodies of hung prisoners a day.

Then came the “evidence”, in the form of satellite pictures. The earliest indictment that this evidence was on the embarrassing side of the scale came from the fact that many outlets did not even publish the pictures, inviting the readers to follow their lead and take the State Department at their word. Nobody tried as hard as Fox News to assign credibility to the latest revelation, writing:

“The photographs […] do not definitely prove the building is a crematorium, but they show construction consistent with such use.”

This is a very low standard that we could apply to almost anything. So what is the evidence in the photographs provided by the State Department? (I hope the reader is sitting down for this) 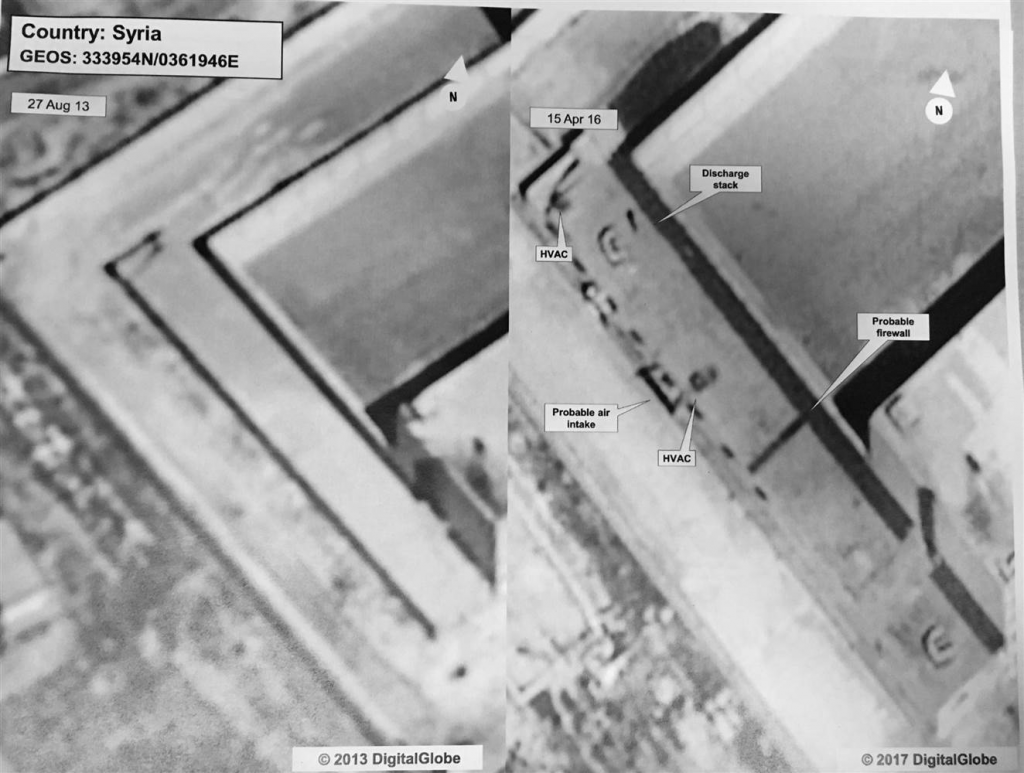 HVACs and a “probable firewall”

Case closed! It is hard to imagine any serious journalist reporting this as anything other than some ludicrous fabrications, but this is coming from the same people who will listen and report with a straight face that, according to some official, the world looks to the US as a beacon of freedom, or that Saudi Arabia is committed to fighting terrorism in the Middle East.

There is a reason why the imagined crematorium is at Saydnaya and not at the Presidential Palace in Damascus or the Russian embassy (satellite photographs would also be consistent with these scenarios and any others). A few months ago, Amnesty International released an explosive report called “Human slaughterhouse” which alleged that the Syrian army was hanging 50 people a day at Saydnaya prison. This would add up to over 13.000 executions over the course of the war.

What was the problem with this report? It was a collection of fabrications. It is purely based on unverified testimony from anonymous sources. There are no pictures, no records, nothing, despite several “sources” being former judges or prison guards. This is not to say that the Syrian government has not committed human rights abuses, but even someone who was a political prisoner and a victim of torture dismissed the Amnesty report as ridiculous. Even the 13.000 figure is just an extrapolation (there were only 375 allegedly verified deaths).

This is how the Empire and its propaganda machine work. A (fake news) story is presented with dubious or non-existent evidence and uncritically spread by all the main media outlets to support western intervention. And later on when a new and equally questionable story is released, it is deemed more credible because it is built on the previous fake-news background.

So the media assured us that Assad was guilty of the chemical attack in Khan Shaykhun because after all he had already done it in Eastern Ghouta in 2013, despite the fact that the evidence, not to mention motive, both then and now, strongly suggests otherwise. The goal is never to prove anything, merely to whip up a public frenzy that justifies more bombing and allows al-Qaeda to slip out of the list of terrorist organisations.

The same applies to the new Saydnaya story. Assad surely needed a crematorium to get rid of those 13.000 bodies! And if testimony from al-Qaeda’s PR wing, also known as the White Helmets, is all the media needs to decide whether Assad is guilty of this or that, why is a satellite photo of melted snow and a ventilation system not good enough to assert the existence of a crematorium?

The previous Amnesty “report” was accompanied by a video of a 3D model of the prison. This was not based on any actual footage or photos, but fabricated by “forensic architecture”, based on the accounts of supposed witnesses. Just like a video game. Government officials and their close friends at NGOs like Amnesty International would make great horror fiction writers or video game designers. But because the mainstream media has decided to become just a propaganda vehicle, they are actually writing news.