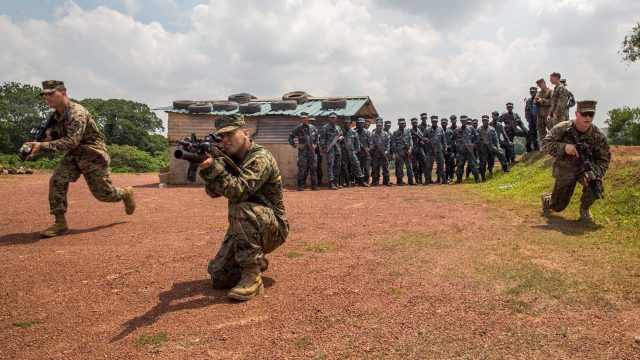 The issue is not whether a new Constitution is needed or not. It is the fundamental and inalienable right of the people to determine the economic, social, political and cultural system in which they choose to live. But that choice will be their choice only if it is freely made, not with a gun pointed at their heads. Today, Sri Lanka finds itself practically under a form of tutelage to the US, a global power whose strategic objective is to maintain its global hegemony.

It is indeed symbolic that the US Ambassador chose to announce Washington’s decision to “assist” Sri Lanka draft its Constitution and implement the Human Rights Council resolution from the amphibious warship USS New Orleans, which is used to land and support ground forces on enemy territory and patrols provocatively close to China. It is also ironic that it is from Temple Trees that the Acting US Assistant Secretary of State Alice Wells declared, last week, that “the United States is – and will continue to be – an Indo-Pacific power.” She was the first to announce America’s “first ever naval exercise” in Sri Lanka in October, in Trincomalee.

You will agree that rewriting the Constitution under such conditions can only advance Washington’s cause, not ours!

There are also other guns pointed at us: the 2015 Human Rights Council resolution and the notorious IMF/World Bank conditionalities, including in particular the political conditionality misleadingly known as ‘Good Governance,” a neoliberal project inimical to the national interest.

Yes, ‘Good Governance” – or “Yahapalana” as we know it here – was not invented by Ranil, Chandrika, Sirisena or Mangala! The IMF, World Bank and the US Treasury coined the term in the late 1980s as a political conditionality for the enslavement of indebted Third World countries such as ours to make us permanently indebted and dependent, facilitating external interference and domination!

“Good Governance” takes politics out of government and manages a shift from government to governance. By doing so, it has undermined nation-building wherever it has been implemented, and fuelled identity conflicts especially in multi-ethnic societies. You will find the same buzzwords in the Human Rights Council resolution and in the ‘good governance’ conditionality: “rule of law,” “democracy,” “devolution,” “participation,” etc. These are the same buzz words parroted by the Yahapalana regime. In January 2016 last year, the Prime Minister Ranil Wickremasinghe told Parliament that the purpose of the new Constitution was, among other things, to establish “a political culture that respects the rule of law and strengthens democracy.”

The aim of ‘Good Governance’ is to convert whatever remains of the State into effective and strong state agencies that guarantee the interests of foreign capital in particular. This not only means that the State will no longer serve the public interest; it will actually be turned into a repressive State against the very people it must serve. Even the World Bank admits that good governance is anti-democratic, that it demands measures directed against the expectations of the majority of the people. In a 2002 report, the World Bank was explicit: “Good governance requires the power to carry out policies and to develop institutions that may be unpopular among some − or even a majority − of the population.”

Behind both these threats – the Human Rights Council resolution and the IMF/World Bank conditionality – is the same face: Washington’s!

Let’s be clear. The demands contained in the Human Rights Council resolution are not Burundi’s or Cuba’s or Russia’s or China’s. They are Washington’s. It was Yahapalana’s abject servility that made it possible for Washington to turn it into a weapon against the Sri Lankan people and their nation. As for the international financial institutions, they are dominated by Washington, which controls nearly 50% of the IMF vote share compared to Sri Lanka’s 0.19%!

The reforms demanded of us are so fundamental that they cannot be implemented without changing the Republican Constitution. A hybrid court is one. Another is the so-called devolution of power, which is a project to dismantle the State. Yet another is the conversion of our armed forces into an auxiliary of the US armed forces against our national sovereignty, independence and territorial integrity. That will require wide-ranging security sector reforms; demilitarisation of the North and East (which means two-thirds of our coastline); external control over recruitment and vetting of employees and officials; ending military involvement in civilian activities; etc. etc.

Underpinning the resolution is the demand for accountability, accountability is the pillar on which the so-called “Responsibility to Protect” (or RtoP) stands, and the goal of RtoP is to legitimise US intervention and domination!

In the late 19th century, the US and Great Britain justified their “savage wars of peace” as the “White Man’s Burden” to bring “civilization and progress” to barbaric non-Western, non-Christian, non-white peoples. Today, the justification is “Responsibility to Protect,” which is claimed by the US and its junior partners in the West as the right to intervene in other countries under the pretext of protecting citizens of those countries. The moral rhetoric is human rights and humanitarianism. The victims are the same – non-Western, non-Christian, non-white.

RtoP is a project of re-colonisation, associated with tutelage. In a report on Responsibility to Protect, the UN Secretary General called for revising the UN Trusteeship System, i.e., the system of tutelage for “non-self-governing” colonial territories (2013). The original proposal came from former US Ambassador Edward Marks who was Deputy Chief of Mission in Sri Lanka, in 1987. Marks talked about an international regime of tutelage for multi-ethnic societies, which he said were “failed States.” His argument is that “the transition from colonial rule to political and economic independence in the nation-state model is proving to be too much for some very fragile multi-ethnic societies.”

The implications of the resolution are far reaching in terms of the ability of foreign powers to intervene in the sovereign affairs of a country, despite domestic opposition. An OHCHR Report on Rule of law tools for post-conflict States (2006), is unambiguous. According to it, in case of domestic opposition to international involvement, an international mandate “provides international actors with the authority and means to intervene directly in domestic affairs and overrule domestic procedures if necessary.”

US interference in Sri Lanka began long before the resolution was adopted. It was, however, the Yahapalana regime that gave it wings and also international legitimacy.

The US Secretary of State John Kerry arrived in Sri Lanka to fix the road map even before a legitimate Government was in place. The two visits to Sri Lanka of Jeffrey Feltman, the UN Under Secretary-General for Political Affairs, are also significant. On his first visit shortly after the 2015 Presidential elections, Feltman declared he was here “to assist in the process of accountability and reconciliation.” On his second visit last month he revealed that accountability and reconciliation had meant changing the Constitution. He came to monitor progress.

Feltman is a former US Assistant Secretary of State, a neoconservative hawk linked to Robert Kagan – their theoretician, Victoria Nuland and Samantha Powers. Feltman has been involved – at the highest level – in regime change, destabilization, the break-up of sovereign States into ethnic enclaves, fomenting violence. I would require more time to give an account of his role in covert operations in the Ukraine, Russia, Syria, Iraq, Lebanon, Moldova, Georgia, Venezuela, Colombia, El Salvador, etc.

Other significant visits include that of Samantha Power, also known as the “Liberal War Hawk,” and George Soros, US multi-billionaire who believes we don’t have enough “constitutional democracy.”

Once the Council resolution was adopted, things moved into high gear. Three months later, the Prime Minister announced the establishment of the Constitutional Assembly, two months later, along with USAID, he said assistance would be obtained from Washington, the European Union, and the UK through the Foreign Office funded Westminister Foundation for Democracy, which was set up in 1992 to organize political parties in Eastern Europe following the collapse of the socialist bloc. In July 2016, the US Assistant Secretary of State Nisha Biswal visited Sri Lanka and admitted there was a direct link between the Council resolution and a new Constitution. She said the Constitution was part of the work “foreshadowed” in the Council resolution and that as ‘co-sponsor,’ the US felt it was “a shared responsibility to help this process through.” That was just before the US Ambassador’s announcement from USS New Orleans that Washington would assist with the drafting.

What began as an agenda to abolish the Executive Presidency was transformed overnight into a full-blown reform of the Constitution.

With the new Constitution, as with the resolution, the Yahapalana regime is trying to convert us Sri Lankans into Washington’s little soldiers who will defend a hegemonic vision based on “invisible threats.” With the arrival of the Yahapalana regime, there has been a strengthening of military ties between the two countries, as confirmed before the US Congress by Acting US Assistant Secretary of State Alice Wells. The recent launch of the US-trained Sri Lanka’s first Navy Marine Force trained for rescue and evacuation of US troops in case of attacks at sea, and the Indian Ocean Conference at Temple Trees, are part of a process that will permanently affect Sri Lanka’s independence and sovereignty.

It is significant that the Minister holding the Foreign Affairs portfolio at the recent Indian Ocean Conference in Temple Trees (August-September) had been involved in drafting a military agreement with high-level US military officials in secret meetings in 2002. He was then Minister of Defence. The Prime Minister on both occasions was the same and was believed to have met with the then US President George Bush in Washington to discuss the Agreement that was to be signed in December.

Coming back to the “invisible threats” to Washington that Sri Lanka will be called upon to fight, what are they? Where is the evidence? These are legitimate questions.

The response to these questions by former Secretary of Defense Donald Rumsfeld shows that Sri Lanka will be dragged into wars and conflicts over which it has no knowledge or control. Rumsfeld was referring to Iraq and so-called Weapons of Mass Destruction, which turned to be a fiction of Washington’s fertile, but sick, imagination, but for which a modern day “savage war for peace” was fought, people massacred and a country destroyed. Here’s what he said: the “absence of evidence is not evidence of absence….There are things we know that we know. There are known unknowns. That is to say, there are things that we know we don’t know. But there are also unknown unknowns. There are things we don’t know we don’t know. … Each year, we discover a few more of those unknown unknowns.”

In this regard, I will leave you with a question for further reflection. It was posed by the famous American writer and filmmaker, Errol Morris :

“Imagine someone tells you that there is an elephant in the room. You search the room, opening drawers, checking closets, looking under the bed. No elephant. Absence of evidence or evidence of absence?”

Friends, fellow Patriots, if the Constitution is to be ours, written by a free people, we must first resist this diabolical project!

Cover photo: Joint military training involving US and Sri Lankan militaries. Photo from the Department of Defense website. We are also required to include this disclaimer: “The appearance of U.S. Department of Defense (DoD) visual information does not imply or constitute DoD endorsement.”