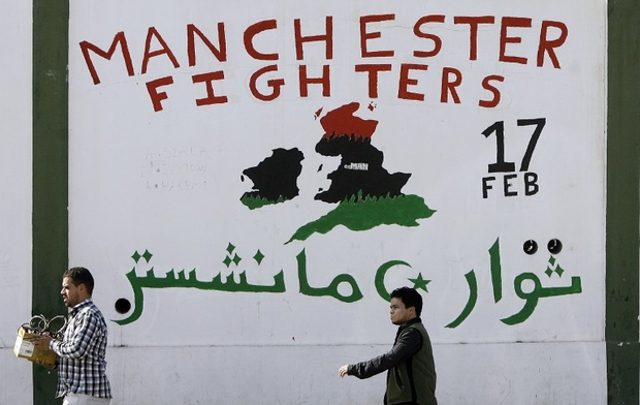 The British government operated an “open door” policy that allowed Libyan exiles and British-Libyan citizens to join the 2011 uprising that toppled Muammar Gaddafi even though some had been subject to counter-terrorism control orders, Middle East Eye can reveal.

Several former rebel fighters now back in the UK told MEE that they had been able to travel to Libya with “no questions asked” as authorities continued to investigate the background of a British-Libyan suicide bomber who killed 22 people in Monday’s attack in Manchester.

Salman Abedi, 22, the British-born son of exiled dissidents who returned to Libya as the revolution against Gaddafi gathered momentum, is also understood to have spent time in the North African country in 2011 and to have returned there on several subsequent occasions.

British police have said they believe the bomber, who returned to Manchester just a few days before the attack, was part of a network and have arrested six people including Abedi’s older brother since Monday.

Home Secretary Amber Rudd has said that Abedi was known to security services, while a local community worker told the BBC that several people had reported him to the police via an anti-terrorism hotline.

On Wednesday, authorities in Tripoli said that Abedi’s younger brother and father, who had resettled in Libya after the revolution, had also been arrested on suspicion of links to the Islamic State (IS) group, which claimed responsibility for Monday’s attack.

Sources spoken to by MEE suggest that the government facilitated the travel of Libyan exiles and British-Libyan residents and citizens keen to fight against Gaddafi including some who it deemed to pose a potential security threat.

One British citizen with a Libyan background who was placed on a control order – effectively house arrest – because of fears that he would join militant groups in Iraq said he was “shocked” that he was able to travel to Libya in 2011 shortly after his control order was lifted.

“I was allowed to go, no questions asked,” said the source, who wished to remain anonymous.

He said he had met several other British-Libyans in London who also had control orders lifted in 2011 as the war against Gaddafi intensified, with the UK, France and the US carrying out air strikes and deploying special forces soldiers in support of the rebels.

“They didn’t have passports, they were looking for fakes or a way to smuggle themselves across,” said the source.

But within days of their control orders being lifted, British authorities returned their passports, he said.

“These were old school LIFG guys, they [the British authorities] knew what they were doing,” he said, referring to the Libyan Islamic Fighting Group, an anti-Gaddafi Islamist militant group formed in 1990 by Libyan veterans of the fight against the Soviet Union in Afghanistan.

The British government listed the LIFG as a proscribed terrorist organisation in 2005, describing it as seeking to establish a “hard-line Islamic state” and “part of the wider Islamist extremist movement inspired by al-Qaeda”. Former members of the LIFG deny that the group had any links with al-Qaeda and say it was committed only to removing Gaddafi from power.

Belal Younis, another British citizen who went to Libya, described how he was stopped under ‘Schedule 7’ counter-terrorism powers on his return to the UK after a visit to the country in early 2011. Schedule 7 allows police and immigration officials to detain and question any person passing through border controls at ports and airports to determine whether they are involved in terrorism.

He said he was subsequently asked by an intelligence officer from MI5, the UK’s domestic security agency: “Are you willing to go into battle?”

“While I took time to find an answer he turned and told me the British government have no problem with people fighting against Gaddafi,” he told MEE.

As he was travelling back to Libya in May 2011 he was approached by two counter-terrorism police officers in the departure lounge who told him that if he was going to fight he would be committing a crime.

But after providing them with the name and phone number of the MI5 officer he had spoken to previously, and following a quick phone call to him, he was waved through.

As he waited to board the plane, he said the same MI5 officer called him to tell him that he had “sorted it out”.

“The government didn’t put any obstacles in the way of people going to Libya,” he told MEE.

“The vast majority of UK guys were in their late twenties. There were some 18 and 19. The majority who went from here were from Manchester.”

But he said he thought it was unlikely that Abedi, who would only have been 16 at the time, would have been recruited as a fighter.

“The guys I was fighting with would never put a 16-year-old boy anywhere near the frontline.”

Younis said he did not think that the policy of allowing British-Libyans to fight againt Gaddafi had been a contributing factor in Monday’s attack, pointing out that IS was not present in the country at the time – and said he had no regrets about his decision to fight.

“What inspired me to go to Libya was the liberty of civilians. There’s no way that that can morph into killing children,” he said.

Another British citizen with experience of fighting in both Libya and in Syria with rebel groups also told MEE that he had been able to travel to and from the UK without disruption.

“No questions were asked,” he said.

The majority of the fighters flew to Tunisia and then crossed the border into Libya, while others travelled via Malta, he said.

“The whole Libyan diaspora were out there fighting alongside the rebel groups,” he added.

One British-Libyan man from Manchester who also wished to remain anonymous told MEE that he had travelled frequently to Libya during the 2011 revolution to undertake humanitarian aid work.

“I never got prevented from going to Libya or stopped when I tried to come back,” he said.

The man said that he had come across Salman Abedi at their local mosque in the Didsbury neighbourhood but that he had “kept himself to himself” and was not an active member of the community.

His family, who were originally from Tripoli, had returned to Libya, he said.

“I guess if your family is away from you that sense of belonging dissipates. For us Libyans in Manchester – they’re trying to imply we knew. He was just an individual and he’s nothing to do with us.”

Another person who knew Abedi described him as a “hot head” with a reputation for involvement in petty crime.

“Yesterday they’re drug dealers, today they’re Muslims,” he said, adding that he believed Abedi had also been friends with Anil Khalil Raoufi, an IS recruiter from Didsbury who was killed in Syria in 2014.

One of the British-Libyans spoken to by MEE described how he had carried out “PR work” for the rebels in the months before Gaddafi was overthrown and eventually killed in October 2011.

He said he was employed to edit videos showing Libyan rebels being trained by former British SAS and Irish special forces mercenaries in Benghazi, the eastern city from where the uprising against Gaddafi was launched.

“They weren’t cheap videos with Arabic nasheeds [songs], they were slick, professional glossy films which we were showing Qataris and Emiratis to support troops who were getting elite SAS training.”

He was also tasked by rebel commanders with training young Libyans to use cameras so that they could sell packages to international media.

On one assignment at a rebel base camp in a Misrata school, he came across a group of about eight young British-Libyans. After joking about their northern accents he found out that they had never been to Libya before.

“They looked about 17 or 18, maybe one was 20 at most. They had proper Manchester accents,” he said. “They were there living and fighting and doing the whole nine yards.”

Many Libyan exiles in the UK with links to the LIFG were placed on control orders and subjected to surveillance and monitoring following the rapprochement between the British and Libyan governments sealed by the so-called “Deal in the Desert” between then-British Prime Minister Tony Blair and Gaddafi in 2004.

According to documents retrieved from the ransacked offices of the Libyan intelligence agency following Gaddafi’s fall from power in 2011, British security services cracked down on Libyan dissidents in the UK as part of the deal, as well as assisting in the rendition of two senior LIFG leaders, Abdel Hakim Belhaj and Sami al-Saadi, to Tripoli where they allege they were tortured.

Belhaj later returned to Libya and was a leading figure in the uprising against Gaddafi, while another former Libyan exile subjected to a control order in the UK was later tasked with providing security for visiting dignitaries including British Prime Minister David Cameron, French President Nicolas Sarkozy and US Secretary of State Hillary Clinton, MEE understands.

‘When the revolution started, things changed’

Ziad Hashem, an LIFG member granted asylum in the UK, said in 2015 that he had been imprisoned for 18 months without charge and then restricted to his home for a further three years based on information he believed had been supplied by Libyan intelligence.

But he said: “When the revolution started, things changed in Britain. Their way of speaking to me and treating me was different. They offered to give me benefits, even indefinite leave to remain or citizenship.”

Control orders were introduced as part of counter-terrorism legislation drafted in the aftermath of the 2005 London bombings.

They allowed authorities to restrict the activities of people suspected of involvement in terrorism-related activities by requiring them to remain at a registered address for up to 16 hours a day, subjecting them to electronic tagging, limiting their access to telephone and internet communications, and banning them from meeting or communicating with other people deemed to be of concern.

At least 50 people were subjected to the measure with at least 12 Libyan exiles among them.

Control orders were replaced with Terrorism Prevention and Investigation Measures (TPIMs), which allow authorities to impose many of the same restrictions while limiting their term to two years, in 2011.

The Home Office told MEE it did not comment on individual cases. It said that TPIMs were a robust and effective means for dealing with terrorism suspects who could not be prosecuted or deported.

It said that arrangements involving the police, the Home Office and the Security Service (MI5) had been put in place in 2011 during the transition from control orders to TPIMs to ensure that national security was maintained.

Areeb Ullah contributed to this story.

Cover photo: A mural in Tripoli paying tribute to fighters from Manchester who joined the 17 February Martyrs’ Brigade during Libya’s revolution against Gaddafi (AFP)

Libyan Labels: a journey through the Guardian’s coverage of the Libyan disaster