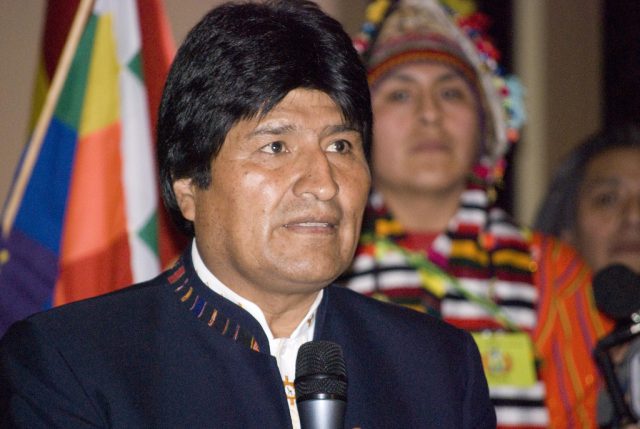 Gabriela Zapata said she “lied” about having a child with the Bolivian leader as part of a 2005 scheme by the main opposition party.

In a series of shocking confessions, Gabriela Zapata, the former romantic partner of Bolivian President Evo Morales, claimed she was the key figure in a smear campaign scandalizing the personal life of the Bolivian leader since 2005, two years before they allegedly had a child together.

“I lied, I want to clarify this, because I have been used by (main opposition leader) Mr. Samuel Doria Medina through (his lawyer) Mr. Eduardo Leon,” Zapata claimed in an interview with the local broadcaster ATB, accusing the head of the right-wing National Union party of being behind the smear campaign.

Last February, the woman shot into the public eye when Morales’ opponents accused him of influence-peddling linked to a Chinese construction firm in which Zapata held a top post and which won multi-million dollar state contracts.

The leftist leader denied the allegations and called for an investigation into the claims while also going on the offensive and admitting that he had fathered a child with Zapata in 2007 during their two-year relationship, who died shortly after birth.

However, according to the women’s new claims, the existence of the child seems to have been invented as part of the scheme by the opposition leader that began in 2005, the same year Morales was running for president for the first time and also the year he and Zapata began their relationship.

That year, she was “approached by a group of people” while she was participating in the youth division of Morales’ Movement for Socialism party. “I want to confirm that there is no child,” she said. “This has been manufactured since 2005 to use at a certain time.”

She also claimed that she was given “a script” of what to say regarding the fact that she had a child with the Bolivian leader and that he was “a monster.”

The man who was behind the 2005 plan against Morales, according to Zapata, was his very own campaign manager Walter Chavez, who later left the campaign after he was accused of working in secret for Medina’s opposition party, an allegation that she also confirmed in the recent interview.

The scandal surfaced last year ahead of a referendum on whether or not to remove limits on presidential terms, and government supporters blamed the smear campaign for leading to the referendum’s defeat at the polls. Shortly after the fiction-like drama unfolded, Zapata was arrested over charges of influence peddling at the Chinese engineering firm CAMC.

In the interview, Zapata also claimed that Medina had paid for the costs of hiring a fake child — allegedly between US$5,000 and US$15,000 — to go for an interview with CNN last July in order to back her story. The interview was never aired and the journalists who did the interview admitted that they were set up.

“I want to tell the truth because I believe that the truth can set us free and if we have done something we will pay and I will assume responsibility for what I have done,” Zapata said as she concluded the interview.

“But I want people to realize that there is a person who has used me and never helped me, he has promised to help me and he has only used me … to benefit him, to embarrass me, to embarrass others, perhaps to affect a president.”

From his Twitter account Monday, Medina responded to Zapata’s allegations, ironically claiming the government is using her to “launch a false accusation against” his party.