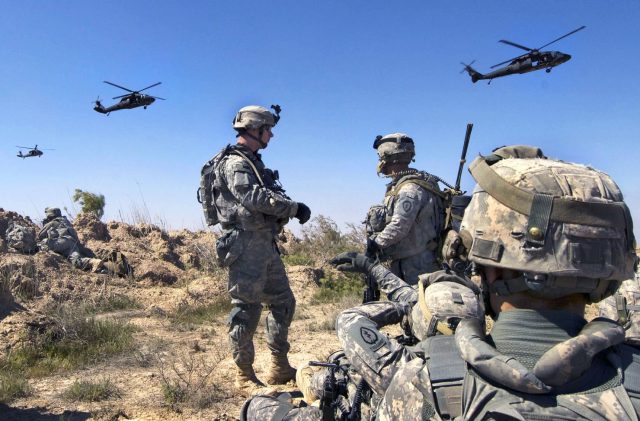 The Trump administration is moving closer to its goal of creating “safe zones” within Syria. Though this strategy may be described as a humanitarian effort, the sizable increase in military presence that it will bring looks more like an invasion in disguise.

Soon after his inauguration, President Trump stoked concerns regarding of U.S. intervention in Syria after announcing his plan to create so-called “safe zones” within Syria. At the time, Trump had ordered Secretary of State Rex Tillerson, along with Secretary of Defense James Mattis, to create a plan within 90 days to create such “zones” within Syria in order to allow refugees in the war-torn nation to “await firm settlement, such as repatriation or potential third-country resettlement.”

Trump stated that this approach was preferable to the strategy adopted by European Union nations that resulted in the controversial influx of millions of refugees from Syria and other countries. As analysts noted at the time, the move, despite its allegedly humanitarian motivations, risked sparking something much more grave: the escalation of U.S. military involvement in Syria, which would greatly heighten the risk of conflict between the US. and the Syrian government, along with its Russian allies.

Now, it appears that Tillerson and Mattis are quickly approaching the completion of their strategy for the establishment of Syrian “safe zones” after Tillerson recently confirmed the administration’s commitment to the measure in both Syria and Iraq at a summit held for a 68-member U.S.-led coalition that is targeting Daesh.

Though the details of the plan have yet to be released, many members of the coalition and members of previous U.S. presidential administrations have voiced their concerns that “safe zones” would be ineffective, concerns that Trump himself once echoed in criticizing Hillary Clinton’s advocacy for such zones in the 2016 election. For example, Portuguese Foreign Minister Augusto Santos Silva stated that his government was “never close to favoring this solution,” arguing that forcing refugees “to stay in their country when you cannot ensure that they won’t be attacked by some of the warring factions” fails to comply with international law.

Indeed, the U.S.-led coalition seems quite unqualified to oversee civilian safety, as bombing campaigns in recent months have claimed more innocent Syrian and Iraqi lives than military actions taken by Daesh or any other faction currently active in those countries.

In addition, tensions between coalition members and some U.S. allies in the region threaten even the feasibility of establishing the zones in the first place. Any plan to establish the zones would require cooperation with Russia and Syria, who are likely to oppose any such measure, as the zones would necessitate a massive increase in the U.S. military presence in Syria. Furthermore, the zones are set to be held by a still undetermined mix of Turkish, Kurdish and Western forces – an unlikely combination due to the often explosive antagonism between the Turks and the Kurds.

Brian McKeon, former undersecretary of defense for policy in the Obama-era Pentagon, echoed such concerns, stating that safe zones would be counter-productive in the fight against Daesh in an interview with Foreign Policy:

“A safe zone in theory assumes some agreement on the part of the Russians, Turks and possibly Syrians to yield sovereignty, or you don’t have agreement. The number of assets it would take to defend against potential attacks would likely be to the detriment of the counter-ISIL campaign.”

Considering that such “safe zones” will in no way guarantee safety of any kind and may be entirely impossible to implement due to Turkish-Kurdish tensions, the Trump administration’s commitment to such measures – along with other actions they have recently taken in the region – suggest that their real motivation is something else entirely.

Most telling of all is the fact that the debate over safe zones has coincided with the increased movement of U.S. troops and military assets into Syria and Iraq, such as the U.S.’ recent deployment of 2,500 soldiers to both Iraq and Syria. In addition, the U.S. government has signaled that these troops will remain in those nations long after Daesh is no longer deemed a threat.

For instance, hidden within the announcement of U.S. troop deployment in the Syrian city of Raqqa was the admission that the troops will be “required” to stabilize the region after Daesh’s defeat, as U.S. officials anticipate that “America’s allies” will need assistance in establishing “Syrian-led peacekeeping efforts” in the region for the foreseeable future. As for the forces to be deployed to Iraq, Tillerson confirmed that they would remain in Iraq after the defeat of Daesh in Mosul, despite his promise that no “nation-building” would take place afterwards.

Any additional forces deployed in Syria and Iraq for the establishment of “safe zones” would also ostensibly form part of an indefinite military presence within nations that have not authorized their operations within their borders – making these troop movements tantamount to an invasion. Moreover, the recent announcement from the Pentagon that they would no longer be publicly announcing subsequent troop deployments suggests that the U.S. government is seeking to obfuscate what is set to be a drastic increase in U.S. military presence in both Syria and Iraq – an increase set to spark geopolitical tensions in the region and beyond.

Ultimately, these safe zones – despite their humanitarian function – seem to be nothing more than an excuse to justify an increased U.S. military presence within Syrian and Iraqi borders – forces which, by the military’s own admission, have no intention of leaving anytime soon.