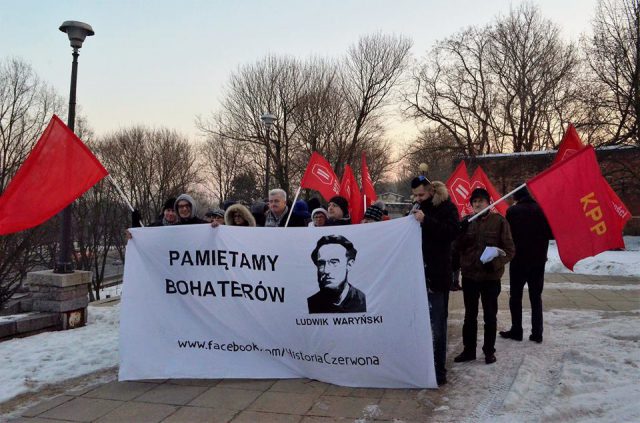 Investig’Action: In an interview given to International Communist Press, the central committee of the Communist Party of Poland share their thoughts on the growing militarism in Poland and Europe, NATO’s expansion to the Russian borders and their resistance against militarism and imperialism.

ICP: It can be observed that NATO/US soldiers are placed not only in Poland, but also on a line starting from the Baltic countries to Hungary. When the already-existing military bases are also considered, it is obvious that Russian borders are surrounded within a half-circular area getting as far as the Mediterranean Sea. Likewise, Putin described this as a threat against security. How do you evaluate the situation in terms of the struggle between imperialist centers?

KPP: In recent years we witnessed NATO’s expansion around the world, especially in Central and Eastern Europe. NATO is trying to encircle Russia, contrary to the US promises made in 1990 not to move its forces eastwards. The arc encircling the Russian Federation, seen as a “strategic enemy”, spreads in Europe from Baltic countries to Bulgaria. In all these countries the US military presence is rising. Secretary General of NATO Jens Stoltenberg clearly announces that their aim is to advance the “front line”. The US administration is trying to realise a plan of isolation, marginalization and even split apart the Russian Federation, described by Zbigniew Brzeziński.

Establishing the US bases in Poland and other countries are an example of spreading imperialism and militarism. The US is showing off force aimed to create popular consent for rising military expenditures in Eastern European countries. NATO is pressuring states to modernise its armies. The state authorities are using this situation to control the population and dismantle the opposition. It is not a surprise that in Poland all the main political forces has reached a consensus concerning military expenditures and the US bases. Poland has decided to rise its military budget to over 2% of the GDP, according to NATO’s requirements. It is modernising its armed forces, not for defensive aims but for being able to participate in imperialist aggressions. Great multinational military companies, mainly US based, are striving to gain more contracts in the region. The so-called “Rapid Intervention Force”, created in Europe and being ready to intervene in various regions in 48 hours, is a part of this plan.
Military tensions and force show offs are also closely associated with the imperialist game between Russian companies, their European partners and great multinational companies. The struggle between imperialist centres is a struggle for markets and access to the natural resources, mainly oil and gas. Part of it is a rivalry on pipelines from Transcaucasia and Central Asia to Europe and struggle to eliminate Russia as a transfer country from the Caspian region.

ICP: The US authorities plead Russia’s intervention to Ukraine as a reason for the military move. Today, what is seen in Ukraine is a war situation which has critical importance with regards to balances, widely dispersing with neo-nazism and Christian religious reactionism. So, what is the role of reactionists for the existence of NATO militia in Poland?

KPP: Ukraine is an example how the US and the EU intervene in internal issues of other countries. The overthrow of the Ukrainian government 3 years ago was aimed to move imperialist zone of influence eastwards and create new markets for western monopolies. Washington and Brussels used its money to fund movements destabilising situation in Kiev and led to de facto coup. Institutions such as the USAID, the National Endowment for Democracy, the International Republican Institute and the Soros Foundations were used to transfer resources to political puppets of imperialists. Present war in Donbas is very profitable for the military companies. NATO supports the alliance of neoliberals and neofascists ruling in Kiev even despite violations of the Minsk peace agreements by the Ukrainian government and lack of democracy in this country. This war is an element of escalating tensions and confrontation between nuclear powers that may result with a destructive and total war.

Situation in Ukraine, presented in a greatly distorted way, is also used as a justification of the aggressive doctrine of NATO. In Poland it is shown as one of the reasons for creating the Territorial Defence Forces – volunteer force, composed largely of the right-wing paramilitaries. They are uselesss from the military point of view, but may be an important factor in case of an internal turmoil. Poland may be repeating Ukrainian model in which reactionaries are important support for the government while progressive, communist forces subjected to persecution.

ICP: We see that an expectation for the US presidential elections to calm down the tensions in global political atmosphere has tried to be imposed. For instance, almost a rescuer role is attributed to Trump about the regulation of NATO-Russia relationships. What kind of a course do you think NATO’s existence in Europe will follow during Trump’s presidency?

KPP: We do not share any illusions on the US policy after Trump became a president. We should remember that powerful lobbyists of the corporations and military complex, influential in Washington, cannot afford to retreat from Europe. They repeated previous propaganda about Russian “aggression” against Ukraine. In the UN representatives of the US administration announced that lifting sanctions against Russia is impossible if the Russian Federation will not abandon Crimea.

Military complex is gaining new influence and funds. Trump has already announced the rise of the military expenditures in 2017 under a slogan “Make US military strong again”. He is planning to order new warships for the US Navy expeditionary forces. We may witness some changes in political language, but imperialist competition will continue. The US and Russia will still have contradictory interests in the Middle East or Eastern Europe. Trump wants to keep good relations with the Great Britain still keeping its imperialist ambitions and rising military force. The US president has also assured the Saudi monarchy that he will cooperate with it on the Syrian issue. That means at least turning a blind eye on a reactionary forces destabilising Syria. He has already approved actions of the US special forces in the Middle East and it is unlikely he will change anything with campaign of drone attacks causing many civilian deaths.

ICP: Within the last days of December, in his speech held in Estonian capital Tallinn, the USA senator John McCain claimed that the military existence in Europe is not a threat against the security of the countries especially for Poland and on the contrary that it was a guarantee of security. How does the Polish people feel in terms of their own security? Is there a backlash against US soldiers?

KPP: It is too early to talk about attitude of Polish people towards the US bases. Nowadays their image is shaped by the government’s propaganda and slogans about the national defence. Arrival of the US troops to Poland was preceeded with wide propaganda campaign in the main media. Convoys of the US armour were organised and international military exercises held in Poland to demonstrate their equipment to people. In mid January, when US forces arrived, military picnics were organised by the Ministry of Defence in all regions. However they were not very popular among the people. It seems that most of the society is passive and many people are just tired of this and concerned mostly with social issues. There were several car accidents with participation of the US military vehicles that became base for jokes on the US soldiers but it is hard to say what will be the attitude in future.

ICP: While the imperialist aggression continues, what kind of a struggle will the Communist Party of Poland organize against the harboring of NATO troops in Poland?

KPP: From the beginning Communist Party of Poland (KPP) is opposing the Polish participation in NATO. We were protesting when Poland was joining the Alliance in 1999 and shortly after, when Yugoslavia was attacked. KPP openly opposed all the wars waged by the NATO and the US in Afghanistan, Iraq, Libya and other countries. In our materials we remind that none of these aggressions has brought peace, but all ended with internal conflicts and hundreds of thousands dead or injured, destroyed these countries’ infrastructure and deteriorated the lives of millions. We have always expressed our solidarity with peoples suffering from imperialist aggressions and their liberation struggles.

KPP is convinced that resistance has to be international. We participate in international anti-imperialist and anti-militarist initiatives as the anti NATO protests during NATO summit in Warsaw in July 2016.

KPP, contrary to opportunistic parties, does not call for reforms of NATO or replacing it with a European army. We call for its complete dissolution and replacing it with solidarity of the peoples. We present class attitude rejecting nationalism and militarism, because they are used against the working class especially now in times of crisis. Military expenditures are made on a cost of funds on welfare, healthcare or education.

We continue our anti-militarist activity now, when the US troops are stationed in Poland. We are certain that resistance, specially local in places where bases are established, will be growing.

From a Sunday to a Monday in August, the Sixth Day