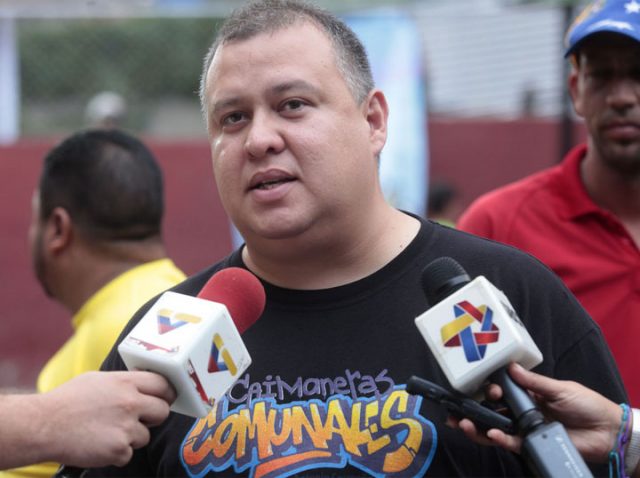 Revolutionary activist and sociologist Reinaldo Iturriza has spent many years working with popular movements in Venezuela and writing on the rise of Chavismo as a political movement of the poor. He also served as Minister for the Communes and Social Movements, and then Minister for Culture in President Nicolas Maduro’s cabinet between 2013 and 2016.

Together with activists from a range of grassroots revolutionary organisations and social movements, he is standing as a candidate for the Popular Constituent Platform in the July 30 elections for a Constituent Assembly that will seek to find a political way out of the current turmoil gripping Venezuela through the drafting of a new constitution.

Green Left Weekly’s Federico Fuentes interviewed Iturriza to gets his views on the current challenges facing Chavismo and the proposed Constituent Assembly.

How would you characterise the current political and economic situation in Venezuela?

The political and economic situation in Venezuela today is the most difficult one we have faced since 1999, the year in which Hugo Chavez assumed the presidency. This situation is occurring within a global economic context, which of course partially explains what is happening: the drop in the prices of raw materials, and in Venezuela’ case the fall in oil prices.

But there are many other important factors, because what is at stake is not simply control over Venezuela’s natural resources, but the meaning, the reach, the influence even of Venezuela’s revolutionary democratic experiment.

What is at stake is Chavismo’s political capital, and that explains why, together with the brutal attacks on the economy and the new wave of street violence that began on April 1, we have seen attacks on the republic being made in the name of Chavez, such as Attorney General [Luisa Ortega] has done, as well as some ex-ministers, almost all of whom are conspiring with the right to overthrow the constitutional president, Nicolas Maduro.

This anti-Chavismo has not been able to, and will not be able to convert itself into a viable political reference point for the majority of the population. Its class origins and the content of its governing program, which is neoliberal and radically anti-people, impede this. That is why its efforts have been centred on demobilising the people, demobilising and demoralising.

The boycott against the national economy, which economist Pasqualina Curcio has explained very well in her book The Invisible Hand of the Market, seeks to not only create discontent, but to demoralise what is a very politicized populace.

Anti-Chavista violence, that contrary to what the immense majority of the media say has left a trail of deaths in which a majority of the victims have been people who were not participating in any protest, has been aimed against public infrastructure in general: schools, hospitals, popular markets, food shortage deposits, electricity infrastructure, public transport, government institutions, etc.

It has also expressed itself in the form of hate crimes (lynchings in public places of people “suspected” of being Chavista) and attacks on military bases. This has produced an important degradation of public life.

Lastly, the discourse according to which Nicolas Maduro has “betrayed the legacy of Chavez” clearly seeks to sow confusion, disorientation or at the very minimum doubt in the minds of the people. The most rancid sector of the anti-Chavista political class has even gone as far as to express its “concern” for the legacy of Chavez. The objective is to defeat Chavismo by attacking its material, spiritual and symbolic bases.

What has been the response of grassroots Chavismo and the people in general to this situation?

The issue that has had the most lasting effects, and is without a doubt the principal concern of the majority of the population, is the whole range of brutal aggressions that have been carried out against the economy, the induced shortages and inflation as a consequence of the manipulation of the illegal exchange rate that has occurred.

Grassroots Chavismo, the most militant sector, has been particularly hit hard materially, it is sitting back, waiting, and much like the majority of the population shares a generalised rejection towards the political class, but continues to support Maduro.

I agree with the political arguments that President Maduro has made in explaining his call for a Constituent Assembly. He is attempting to find a political way out of a conflict that everyday seems to be heading in the direction of a resolution by force.

The express, public objective of the anti-Chavista political class is to generate a situation of ungovernability. The president is trying to create some minimal conditions in which it can govern in peace. He is not interested in perpetuating himself in power, as the right-wing propaganda campaign claims.

What can you tell us about the Popular Constituent Platform?

The platform is a space in which some of the movements and organisations that in 2011 participated in Chavez’s initiative to create a Great Patriotic Pole have come together. These include the Urban Poor Movements (Movimientos de Pobladores), the Bolivar and Zamora Revolutionary Current (CRBZ, Corriente Revolucionaria Bolívar y Zamora), the National Network of Commune Activists (Red Nacional de Comuneros), and comrades from feminist, sex-gender diversity, and student movements, among others.

Beyond the immediate issue of the elections, we believe it is strategically important to combine efforts in the construction of reference points for popular unity. This phenomenon of a retreat from politics that I referred to before is in part caused by a severe crisis of political mediation.

The most advanced initiatives in popular organisation, of popular self-government, are not necessary the result of the work of the party. In fact, in many places, the party bureaucracy puts obstacles in the way of these initiatives.

So we have these dispersed experiences throughout the country, but lack the necessary connections between them. And achieving basic levels of connections and unity is vital for guaranteeing the continuity of the revolutionary process.