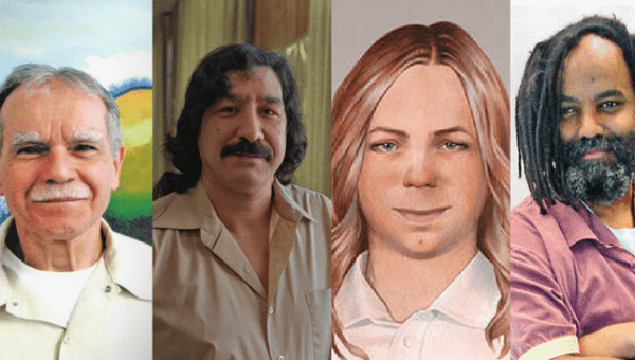 The U.S. has its own fair share of prisoners of conscience, as well as crimes against humanity that it needs to answer for.

When other people commit terrorism it’s called terrorism; when the U.S. commits terrorism, on the other hand, it’s called collateral damage, an accident, unfortunate — or freedom and democracy promotion.

It should come as no surprise, then, that a surplus of hypocrisy is also on display in jailing patterns in the U.S., where the highest incarceration rate in the world continues to disproportionately punish Black people and where crimes resulting in life sentences have included shoplifting three belts.

Despite regularly lambasting Cuba and other locales on the issue of political prisoners, the U.S. has its own fair share of prisoners of conscience — some of whom are now occupying a bit more media space than usual on account of the denouement of Barack Obama’s term and the countdown on opportunities for presidential pardons.

Among the most visible prisoners is, of course, Chelsea Manning, sentenced in 2013 to 35 years in prison for transferring classified government documents to the whistleblowing website WikiLeaks.

So much for freedom.

In his book “The Passion of Chelsea Manning: The Story Behind the Wikileaks Whistleblower,” U.S. civil rights attorney Chase Madar offers a description of Manning’s treatment over nine months of pre-trial solitary confinement in Virginia, where she was prohibited from exercising in her cell, required to respond every five minutes to guards, and forced to sleep naked after suggesting that underwear might be an effective suicide instrument.

Madar wonders: “Why was Manning treated like the inmate of a Soviet psychiatric prison?”

But let’s reflect on the nature of Manning’s alleged “crime” — by which she was deemed to be imperiling “national security” and all of that good stuff. Regarding the leaking of classified material, Madar points out that in 2010 the U.S. managed to frenetically classify no fewer than 77 million documents.

As for the contents of subsequently leaked items, he notes that these included such information as that “the Congo is rich in mineral wealth … (and) that the Strait of Gibraltar is — get the smelling salts — a vital shipping lane.” Apparently, there can never be too many state secrets.

Among the more noteworthy items leaked by Manning was the video — released by WikiLeaks with the title Collateral Murder — of a 2007 U.S. helicopter massacre of Iraqis, including a Reuters photographer. The U.S. military perpetrators of the bloodbath can be heard laughing and emitting satisfied comments like: “Oh, yeah, look at those dead bastards.” On the basis of this video, it would seem that Manning’s great crime was simply to facilitate confirmation of what anyone paying attention already knew: that the U.S. military engages in criminal behavior worldwide with near-total impunity.

The U.S. drew a typically backward lesson from the affair, and further solidified its commitment to violating justice by imprisoning the messenger. A recent article in Britain’s New Statesman magazine in honor of Manning’s 29th birthday on December 17 observes that “after six years of punishment in conditions that have been at times unlawful and always outrageous, she has already served longer than anyone convicted of similar offenses.”

Another political prisoner awaiting liberation from the U.S. penal system is septuagenarian Puerto Rican nationalist Oscar López Rivera, in jail for three-and-a-half decades thus far — much of that time in solitary confinement. The Guardian sums up his transgression as follows: “He is convicted of killing no one, of hurting no one. His crime was ‘seditious conspiracy’ – plotting against the U.S. state in the furtherance of Puerto Rican independence.”

So much for America’s alleged realization, centuries ago, that it’s not cool to be a colony. Again, the double standard rears its ugly head: Puerto Ricans can fight America’s wars — as López Rivera did in Vietnam — but they can’t fight for their own independence, or even their right to vote in the U.S.

According to The Guardian, the “Mandela of Puerto Rico” spends his days exercising, painting, reading, teaching fellow inmates Spanish, and otherwise making the most of his eternity behind bars. There have been numerous calls worldwide for Obama to release the man, while Fox News — true to form — has produced some convincing counter-pleas warning audiences that “before ISIS, there was the FALN (López Rivera’s former organization), the most prolific terrorist group ever to attack the United States.”

It sure is difficult to be an American these days, caught between an encroaching caliphate and a tiny island.

Beyond the likes of Manning and López Rivera, there are plenty of long-term detainees who technically qualify as political prisoners — even if they aren’t officially categorized as such by self-appointed international authorities on such matters—by virtue of the fact that the U.S. finds it politically inexpedient to let them go.

Former Black Panther Mumia Abu-Jamal comes to mind, as does Native American activist Leonard Peltier, the latter currently languishing in prison for the 1975 murder of two FBI agents. The judicial process leading to said conviction was, to put it mildly, exceptionally flawed. Amnesty International notes that “the (U.S. Parole) Commission acknowledged (to Peltier) that, ‘the prosecution has conceded the lack of any direct evidence that you personally participated in the executions’” of the agents.

Ultimately, any pardon from Obama should be celebrated for obvious reasons. But no quantity of pardons can absolve him of his shameful legacy vis-à-vis humanity, much less atone for the United States’ enduring and unpardonable crimes.

Belén Fernández is the author of “The Imperial Messenger: Thomas Friedman at Work,” published by Verso. She is a contributing editor at Jacobin magazine.