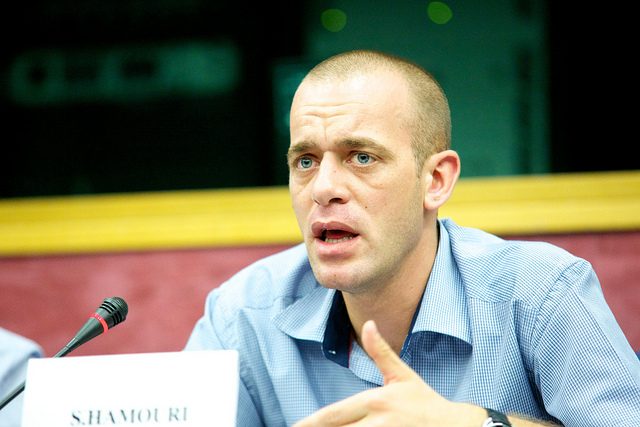 Salah Hamouri, a Palestinian-French human rights defender and lawyer, has been freed from an Israeli prison after more than a year of detention without charge or trial.

On Saturday evening there were reports that Hamouri had been freed and immediately re-arrested, but on Sunday prisoners rights group Addameer, where Hamouri works, confirmed his release.

A journalist from the French public radio network RFI tweeted this photo of Hamouri following his release with his father at the family’s village of Dahiyat al-Barid, near Jerusalem in the occupied West Bank:

Until his release, Hamouri was one of more than 450 persons held by Israel in so-called administrative detention – imprisonment without charge or trial that can be renewed indefinitely.

Elsa Lefort, Hamouri’s wife and a tireless campaigner for her husband’s release, posted on Facebook that she was “feeling fantastic.”

Up until 24 hours before his current term was due to end on Sunday, Lefort had no idea whether the Israelis would renew Hamouri’s arbitrary detention as they did in June.

She told media that she had been in touch with French officials “who were unable to guarantee that Salah would be freed Sunday.”

Over the course of Hamouri’s imprisonment, Addameer and Lefort had repeatedly criticized the French government and President Emmanuel Macron for their inaction over Israel’s arbitrary detention of a French citizen.

The French government said it had repeatedly urged Israel to respect Hamouri’s rights, including allowing a visit by his wife and young son. Despite this, Israel barred Elsa Lefort from entering territory it controls.

Meanwhile France continued to reward Israel, including by hosting Israeli weapons firms at a Paris arms fair and proceeding with the controversial Saison France-Israël, a series of propaganda events sponsored by both governments aimed at whitewashing Israel’s image.

Despite bringing no charges against him during the last 13 months of detention, Israeli officials attempted to publicly smear Hamouri as a terrorist, based on a previous six-year term of imprisonment.

In 2005, Israel charged Hamouri, claiming he was part of a plot by the Popular Front for the Liberation of Palestine to kill Ovadia Yosef, a prominent Israeli rabbi who habitually incited genocidal levels of violence to “annihilate” Palestinians.

Hamouri always maintained his innocence. He was held for three years in administrative detention before accepting a plea deal from Israel’s military court in order to obtain a shorter sentence.

Israel’s military court has a conviction rate for Palestinians of nearly 100 percent.

French citizens organized in support of Hamouri, and even Nicolas Sarkozy, France’s right-wing president at the time, urged Israel to release him in 2011.

Alain Juppé, then France’s foreign minister, wrote in response to a senator in 2011 that Israel’s accusations against Hamouri were “not corroborated by any evidence.”

Despite the Macron administration’s lacklustre response to his most recent arrest, activists and elected officials across France kept up pressure for Hamouri’s release.

On Sunday, several French lawmakers posted messages on Twitter celebrating Hamouri’s release and vowing to continue the struggle for the freedom of other political prisoners held by Israel.

Hamouri’s release will undoubtedly buoy activists in Belgium who are campaigning for the freedom of their fellow citizen Mustapha Awad.

Awad, a Palestinian refugee born in Lebanon who was granted asylum in Belgium, was detained by Israeli authorities as he tried to enter the occupied West Bank from Jordan in July.

Israel accuses Awad, the co-founder of a folk dance group, of membership of the Popular Front for the Liberation of Palestine. Israel considers that political faction, along with virtually all other Palestinian political parties, to be a “terrorist” organization.

On 3 October, Palestine solidarity groups in Belgium are planning a demonstration outside the foreign ministry in Brussels to demand government action to free Awad.

“Mustapha is the victim of an arbitrary arrest. He was kidnapped on the border with occupied Palestine and held incommunicado; he was interrogated 20 hours a day,” the groups state.

“What happens to him is a dangerous precedent and a threat to all Palestinians with a Belgian (or European) nationality.”