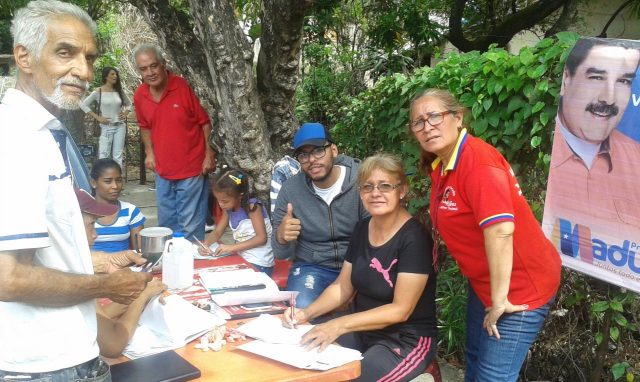 (Investig’Action / Ricardo Vaz in Venezuela) – On Sunday May 6, two weeks ahead of the upcoming presidential and legislative council elections, an electoral dry-run was held in Venezuela. The goal was for voters to become acquainted with the voting process, and in practice it has also become an occasion for chavismo to show its strength and ability to mobilise people.

Besides the 500 voting centres set up by the electoral authorities, the main political movements associated to the government, namely the socialist party (PSUV), the movement We are Venezuela (Somos Venezuela) and the Bolívar-Chávez Battle Units (UBCh), also set up improvised information centres throughout the country. In the Las Delicias parish in the city of Maracay, in the state of Aragua, we had the chance to speak to several people taking part in this event.

Sara Estevez, electoral patrol chief for the voting centre in question (the international school), pointed out that the event had seen a high level of participation. There are a lot of null votes, she stressed, because of people not being familiar with the voting process. Besides the presidential election, members of the legislative councils in each state are also being chosen and voters should be acquainted with the candidates.

During this process people were also registered through the Homeland Card (Carnet de la Patria). Using QR technology, the government has made use of this system to distribute bonuses directly
to people in recent months, for example for senior people, pregnant women, or simply for Venezuelan families. 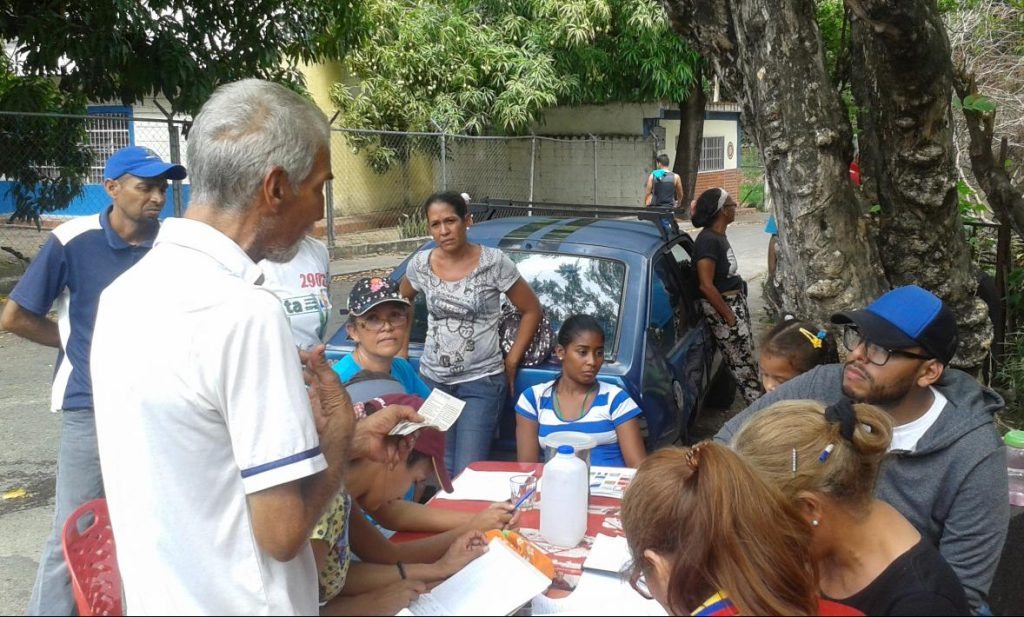 Against the economic war, deepening the Revolution

Guillermo Mosquera has long history inside chavismo, having been the first coordinator of the Movimiento Quinta República, Chávez’s first political party, in this parish. After many years working in the departments of training and ideology, he is now dedicated to documenting the experiences of the past 20 years, under the Bolivarian Revolution.

As for the current crisis, there is no doubt in his mind:

“This is an economic war led by the US, the biggest terrorist on the planet, in the words of Chomsky. Everything they are throwing at us is to put an end to the most important revolution undertaken in the Americas in recent times.”

His opinion is shared by Liliana Acosta, commonly known as “Pepita”. A beloved resident of the street where the dry-run is being held, she has brought the Cocuy (traditional Venezuelan drink) that is being passed around while politics are discussed. Liliana has a long history of struggle. She was the founder of the Aragua chapter of “Cantaura Vive”, a movement dedicated to keeping the memory of the victims of the 1982 Cantaura massacre alive. On this occasion 23 guerrilla members from the Bandera Roja movement were tortured and killed by security forces.

She adds that the aggression against Venezuela has the media as an important battlefront. Beyond getting a hold of Venezuelan natural resources, the goal is to take hold of people’s consciences.

“Faced with that, we are giving a resounding response of participation, to deepen the democratic process and fight back against this crisis which is directed by the American empire.” – she tells us.

All those interviewed revealed confidence and determination ahead of the May 20 elections. They stressed that the people will show their commitment to take part in the democratic process and to defend the Bolivarian Revolution. In Liliana’s words:

“On May 20 the people will make no mistake. Maduro and our socialist candidates will win, and we will move towards the definitive transformation of the economic model.”