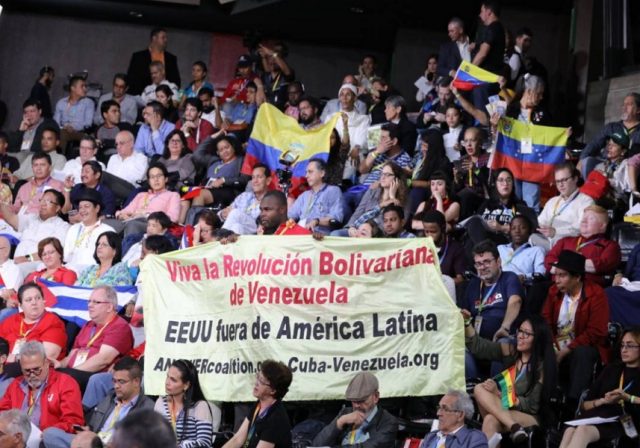 The Alliance for Global Justice along with other defenders of Venezuelan sovereignty call on Congresspeople, the President, members of Parliament and the Prime Minister of Canada to support the recent progress in dialogue made in Venezuela, rather than impose more sanctions, and remove those now in place. Previously there were longstanding mediation talks between the Venezuelan government and the Opposition in the Dominican Republic, presided over by the former Prime Minister of Spain Jose Luis Rodriguez Zapatero, Dominican president, Danielo Medina, and the foreign ministers of Chile, Mexico, Bolivia, Nicaragua and others. These talks have been supported by Pope Francis.

Venezuelan president Nicolas Maduro, who is up for re-election, has just recently reached an agreement with four other presidential candidates to hold presidential elections on May 20.

At this important moment, we call on the US and Canadian governments to support this process, allowing the Venezuelan people to vote democratically, free of foreign threats, for their next president.

Sanctions added by the Trump and Trudeau administrations to Obama era sanctions against Venezuela impose new burdens on ordinary Venezuelans who are just trying to live their lives. Unilateral sanctions are illegal under international law. Over 150 prominent US and Canadian individuals and organizations have signed the letter below which is being delivered to US Senators and Congress Members as well as Canadian Parliamentarians.

We urge the United States and Canadian governments to immediately remove their illegal* sanctions against Venezuela and to support efforts at mediation between the government of Venezuela and the nonviolent segments of the political opposition.

We, the undersigned organizations and individuals in the US and Canada, support hemispheric relations based on respect for the sovereignty of all peoples of the Americas. We are deeply concerned by the use of illegal sanctions, whose effect falls most heavily on the poorest and most marginal sectors of society, to coerce political and economic change in a sister democracy.

Polls in Venezuela show that the large majority of Venezuelans oppose sanctions, regardless of their opinion of the Maduro government. Sanctions merely complicate efforts by the Vatican, Dominican Republic, and other international actors to mediate a resolution to the deep polarization in Venezuela. Moreover, sanctions undermine efforts of the democratically elected government and Constituent Assembly to address critical economic issues and determine their own political destiny.

Despite the high-minded rhetoric of officials in Washington and Ottawa, it is not a genuine concern for democracy, human rights, and social justice that drives the belligerent interventionist posture towards Caracas. From President Obama’s admittedly untrue presidential decree that Venezuela represents a national security threat to the United States, to UN Ambassador Nikki Haley’s declaration that Venezuela is “an increasingly violent narco-state” that threatens the world, the use of hyperbole in diplomatic situations seldom contributes to peaceful solutions on the world stage.

It is no secret that Venezuela, unlike Mexico, Honduras, Colombia, Egypt, or Saudi Arabia, is targeted for regime change by the US precisely because of Venezuela’s leadership in resisting US hegemony and the imposition of the neoliberal model in Latin America. And of course, Venezuela holds the largest oil reserves in the world, attracting more unwanted attention from Washington.

The US and Canada tried and failed to use the Organization of American States (OAS) to build a bloc to hypocritically evoke the Democratic Charter against Venezuela. Recently, Luis Almagro, the rogue Secretary General of the OAS, went so far as to publicly support the swearing in of a parallel Supreme Court unconstitutionally appointed by opposition legislators and allowed them to use the OAS headquarters in Washington DC for their ceremony – without the approval of any OAS member state. Almagro has thereby delegitimized the OAS, emboldened the most extreme and violent elements of the Venezuelan opposition, and side-lined efforts at mediation.

The US-Canadian sanctions represent a cynical use of coercive economic power to attack a nation that is already dealing with hyperinflation and shortages of basic commodities. While said to be in the name of advancing democracy and freedom, the sanctions violate the Venezuelan peoples’ basic human right to sovereignty, as outlined in the UN and OAS Charters.

We call on the political leaders of the United States and Canada to reject overheated rhetoric and to contribute to the search for real solutions to Venezuela’s political and economic problems. We urge the US and Canadian governments to rescind their sanctions and support the mediation efforts pursued by the Chancellor of the Dominican Republic Miguel Vargas, the President of Dominican Republic Danilo Medina, former Spanish Prime Minister Jose Luis Rodriguez Zapatero, the Vatican, and supported by a growing number of Latin American nations.

* Chapter 4 Article 19 of the OAS Charter states:
No State or group of States has the right to intervene, directly or indirectly, for any reason whatever, in the internal or external affairs of any other State. The foregoing principle prohibits not only armed force but also any other form of interference or attempted threat against the personality of the State or against its political, economic, and cultural elements.

Cover photo: Activists from all over the world took part in the recent “We Are All Venezuela” solidarity meeting in Caracas (Photo: MINCI)

US Disregard for International Law is a Menace to Latin America