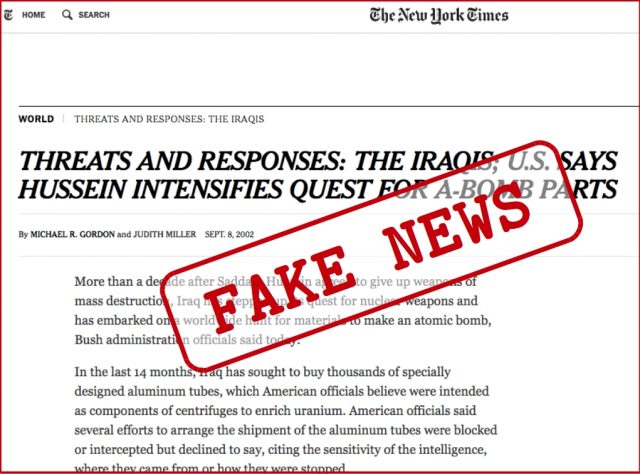 Exclusive: The New York Times is cheering on the Orwellian future for Western “democracy” in which algorithms quickly hunt down and eliminate information that the Times and other mainstream outlets don’t like, reports Robert Parry.

Just days after sporting First Amendment pins at the White House Correspondents Dinner – to celebrate freedom of the press – the mainstream U.S. media is back to celebrating a very different idea: how to use algorithms to purge the Internet of what is deemed “fake news,” i.e. what the mainstream judges to be “misinformation.”

The New York Times, one of the top promoters of this new Orwellian model for censorship, devoted two-thirds of a page in its Tuesday editions to a laudatory pieceabout high-tech entrepreneurs refining artificial intelligence that can hunt down and eradicate supposedly “fake news.”

To justify this draconian strategy, the Times cited only a “fake news” report claiming that the French establishment’s preferred presidential candidate Emmanuel Macron had received funding from Saudi Arabia, a bogus story published by a Web site that mimicked the appearance of the newspaper Le Soir and was traced back to a Delaware phone number.

Yet, while such intentionally fabricated articles as well as baseless conspiracy theories are a bane of the Internet – and do deserve hearty condemnation – the Times gives no thought to the potential downside of having a select group of mainstream journalistic entities feeding their judgment about what is true and what is not into some algorithms that would then scrub the Internet of contrary items.

Since the Times is a member of the Google-funded First Draft Coalition – along with other mainstream outlets such as The Washington Post and the pro-NATO propaganda site Bellingcat – this idea of eliminating information that counters what the group asserts is true may seem quite appealing to the Times and the other insiders. After all, it might seem cool to have some high-tech tool that silences your critics automatically?

But you don’t need a huge amount of imagination to see how this combination of mainstream groupthink and artificial intelligence could create an Orwellian future in which only one side of a story gets told and the other side simply disappears from view.

As much as the Times, the Post, Bellingcat and the others see themselves as the fount of all wisdom, the reality is that they have all made significant journalistic errors, sometimes contributing to horrific international crises.

For instance, in 2002, the Times reported that Iraq’s purchase of aluminum tubes revealed a secret nuclear weapons program (when the tubes were really for artillery); the Post wrote as flat-fact that Saddam Hussein was hiding stockpiles of WMD (which in reality didn’t exist); Bellingcat misrepresented the range of a Syrian rocket that delivered sarin on a neighborhood near Damascus in 2013 (creating the impression that the Syrian government was at fault when the rocket apparently came from rebel-controlled territory).

These false accounts – and many others from the mainstream media – were countered in real time by experts who published contrary information on the Internet. But if the First Draft Coalition and these algorithms were in control, the information scrubbers might have purged the dissident assessments as “fake news” or “misinformation.”

There also should be the fear – even among these self-appointed guardians of “truth” – that their algorithms might someday be put to use by a totalitarian regime to stomp out the last embers of real democracy. However, if you’re looking for such thoughtfulness, you won’t find it in the Times article by Mark Scott. Instead, the Times glorifies the creators of this Brave New World.

“In the battle against fake news, Andreas Vlachos — a Greek computer scientist living in a northern English town — is on the front lines,” the article reads. “Armed with a decade of machine learning expertise, he is part of a British start-up that will soon release an automated fact-checking tool ahead of the country’s election in early June. He also is advising a global competition that pits computer wizards from the United States to China against each other to use artificial intelligence to combat fake news. …

“As Europe readies for several elections this year after President Trump’s victory in the United States, Mr. Vlachos, 36, is one of a growing number of technology experts worldwide who are harnessing their skills to tackle misinformation online. … Computer scientists, tech giants and start-ups are using sophisticated algorithms and reams of online data to quickly — and automatically — spot fake news faster than traditional fact-checking groups can.”

The Times quotes the promoters of this high-tech censorship effort without any skepticism:

“‘Algorithms will have to do a lot of the heavy lifting when it comes to fighting misinformation,’ said Claire Wardle, head of strategy and research at First Draft News, a nonprofit organization that has teamed up with tech companies and newsrooms to debunk fake reports about elections in the United States and Europe. ‘It’s impossible to do all of this by hand.’”

The article continues: “So far, outright fake news stories have been relatively rare [in Europe]. Instead, false reports have more often come from Europeans on social media taking real news out of context, as well as from fake claims spread by state-backed groups like Sputnik, the Russian news organization.”

Though providing no details about Sputnik’s alleged guilt, the Times article links to another Times article from April 17 by Andrew Higgins that accuses Russia’s RT network of “fake news” because it detected a surge in opinion polls for Francois Fillon, who stands accused in the mainstream media of having a positive relationship with Russian President Vladimir Putin. Oddly, however, further down in the story, Higgins acknowledges that “lately, Mr. Fillon has seen a bump in real opinion polls.”

(Ultimately, Fillon finished a strong third with 20 percent of the vote, one percentage point behind National Front’s Marine Le Pen and four points behind Emmanuel Macron, the two finalists. It’s also curious that the Times would fault RT for getting poll results wrong when the Times published predictions, with 90 percent or more certainty – and 85 percent on Nov. 8 – that Hillary Clinton would win the U.S. presidential election.)

Beyond failing to offer any evidence of Russian guilt in these “fake news” operations, Tuesday’s Times story turns to the NATO propaganda and psychological warfare operation in Latvia, the Strategic Communications Center of Excellence, with its director Janis Sarts warning about “an increased amount of misinformation out there.”

The Stratcom center, which oversees information warfare against NATO’s perceived adversaries, is conducting “a hackathon” this month in search of coders who can develop technology to hunt down news that NATO considers “fake.”

Sarts, however, makes clear that Stratcom’s goal is not only to expunge contradictory information but to eliminate deviant viewpoints before too many people can get to see and hear them. “State-based actors have been trying to amplify specific views to bring them into the mainstream,” Sarts told the Times.

As the Times reports, much of the pressure for shutting down “fake news” has fallen on American tech giants such as Facebook and Google – and they are responding:

“After criticism of its role in spreading false reports during the United States elections, Facebook introduced a fact-checking tool ahead of the Dutch elections in March and the first round of the French presidential election on April 23. It also removed 30,000 accounts in France that had shared fake news, a small fraction of the approximately 33 million Facebook users in the country.”

And, according to the Times, this censorship movement is spreading:

“German lawmakers are mulling potential hefty fines against tech companies if they do not clamp down on fake news and online hate speech. Since last year, Google also has funded almost 20 European projects aimed at fact-checking potentially false reports. That includes its support for two British groups looking to use artificial intelligence to automatically fact-check online claims ahead of the country’s June 8 parliamentary election. …

“David Chavalarias, a French academic, has created a digital tool that has analyzed more than 80 million Twitter messages about the French election, helping journalists and fact-checkers to quickly review claims that are spread on the social network.

“After the presidential election in the United States last year, Dean Pomerleau, a computer scientist at Carnegie Mellon University in Pittsburgh, also challenged his followers on Twitter to come up with an algorithm that could distinguish fake claims from real news.

“Working with Delip Rao, a former Google researcher, he offered a $2,000 prize to anyone who could meet his requirements. By early this year, more than 100 teams from around the world had signed on to Mr. Pomerleau’s Fake News Challenge. Using a database of verified articles and their artificial intelligence expertise, rival groups — a combination of college teams, independent programmers and groups from existing tech companies — already have been able to accurately predict the veracity of certain claims almost 90 percent of the time, Mr. Pomerleau said. He hopes that figure will rise to the mid-90s before his challenge ends in June.”

So, presumably based on what the Times, the Post, Bellingcat and the other esteemed oracles of truth say is true, 90 percent or more of contrary information could soon be vulnerable to the censorship algorithms that can quickly detect and stamp out divergent points of view. Such is the Orwellian future mapped out for Western “democracy,” and The New York Times can’t wait for this tightly regulated – one might say, rigged – “marketplace of ideas” to take over.

Investigative reporter Robert Parry broke many of the Iran-Contra stories for The Associated Press and Newsweek in the 1980s. You can buy his latest book, America’s Stolen Narrative, either in print here or as an e-book (from Amazon and barnesandnoble.com).

Robert Parry’s Legacy and the Future of Consortiumnews