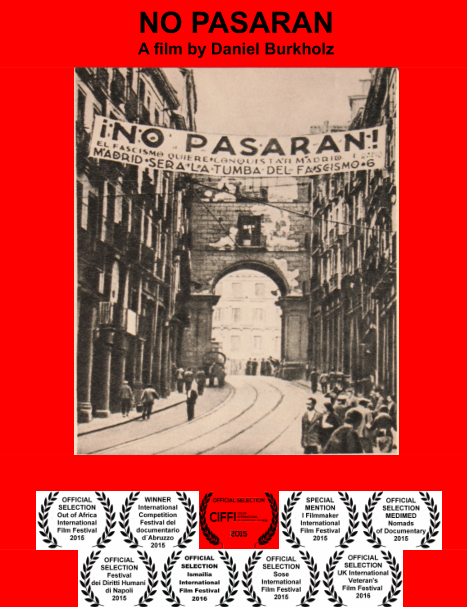 “What did you fight for ?” This question makes the 96-years old Austrian Gerhard Hoffmann, a veteran of the Spanish Civil War and of the Second World War who had been fighting against Fascism, very thoughtful : “You can’t describe that in a few words.”

Your documentary focus on the role of women in the Republican militias, through the testimony of Rosario. Why did you choose this angle ?

Women fought as well as men against fascism and dictatorship. In fact, many women did so. Rosario Sanchez Mora, to whom you are referring to in your question, is a riveting example. And this counts for the republican militias as well as for the resistance movement in World War II where aso many women where engaged. Let me just mention Onorina Pesce, another protagonist of NO PASARAN. Nevertheless these women often didn´t receive the appreciation and recognition they clearly would deserve for what they did. NO PASARAN is a contribution to purge this injustice.

Viewers will be shocked by the treatment of French authorities towards the defeated Republican people that marched through the Pyrenées border. We see today a dramatic parallelism with the situation of Syrian and Afghan refugees. Which lesson should European authorities learn from the exil experience of that time ?

Treating the refugees as what they are : human beings in need for help and shelter – which they should be given. But governments in numerous European countries, just to mention Hungary, Macedonia, Croatia, Austria, Poland, etc., don´t do so. That´s a violation of human rights to a giant extent. This violation must be stopped !

A testimony in your film tells a harsh anecdote, when the French army made a proposal to the Republican fighters that were detained in the French deportation camps. He refused to become a “mercenary” in the “Légion Etrangère”, the troops of French empire in the colonized territories. How would you describe the ideals of the Republican fighters and their awareness about the danger of fascism ?

Let me answer with Gerhard Hoffmann, one of the protagonists of NO PASARAN : “How can I say this in a few words.”.

That´s why I made this film in which these men and women give the answers themselves in the most appropriate way. Most of them knew what fascism meant. Some knew it because they had already experienced fascism in their home countries. Others knew it because they had a social and political background raising their awareness. Basically, there was a range of reasons and motivations for their fight.

In your question, you refer to Kurt Goldstein, who was imprisoned in French concentration camps – from where he then was sent to Auschwitz deathcamp. In the film, he is telling that his main aim was to fight and defeat fascism. In Spain, he was given the opportunity for an armed fight. For him, defeating fascism in Spain would have been the first step back to Germany to defeat Hitler.

Others, like the brothers Almudever, had the strong motivation to fight for freedom and social justice ; the latter, Vincent Almudever told us, meant also to fight for having enough to eat – which was rare for many peasents in Spain´s countryside in the first half of the 30ties.

Eventually, Gerhard Hoffmann told us that their fight, at least the fight of him and his friends, was not merely a fight against fascism, but also a fight for a better society with freedom, equality, justice, the chance and the possibility to live a good live for everybody.

“With his documentary No Pasarán the German Daniel Burkholz has created a document of great historical value.”

NO PASARAN – A story of men and women who fought against Fascism – TRAILER from Roadside Dokumentarfilm on Vimeo.

Next screenings of No Pasaran

In Germany, NO PASARAN is often shown all across the country

On 23nd April, the film will be shown in Ismalia / Egypt

On 24th April the film will be shown in London

On 2nd May the film will be shown in Luxemburg

“This could be heaven for everyone”