No Matter What the Western Propaganda Says, Chinese Democracy is Alive and Well! 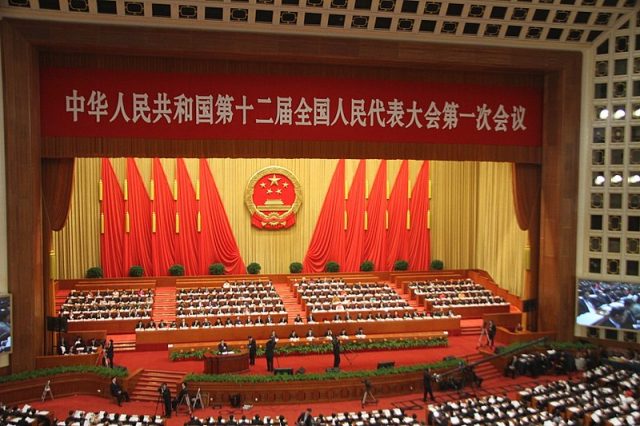 New huge wave of ‘China bashing’ is once again rolling from Europe and North America. Its water is filthy and murky. It tries to smear everything about the present Chinese system: from its own and unique democratic model, to its leadership, as well as the political, economic and social system.

I am periodically reminded that every year, just before China’s annual two sessions, there will be rising voices declaring that the People’s Congress play the role of rubber stamps, and China’s democracy can’t truly represent the people.

Criticism of the Chinese system sometimes comes from within the country, but more often it arrives from abroad. Even local critics are usually deeply influenced by the foreign perceptions.

China is often ‘analyzed’ and judged strictly by the Western norms and rules, and that is chauvinistic and amazingly patronizing.

My friend and colleague Jeff J. Brown, a leading expect on China, author of a book China Is Communist Damn It! wrote indignantly in his recent essay “Western Racism and Hypocrisy Foaming at The Mouth Over China’s Constitutional Changes”:

“So-called “China experts” are piling on with all kinds of doomsday the-sky-is-falling scenarios… President Xi Jinping is being portrayed as megalomaniac, power hungry tyrant. His 1.4 billion citizens respectfully disagree.

This whole Western charade exudes the worst hypocrisy and at its core, racism. When was the last time the mainstream media got into a snit because a Western country changed its laws? In 2001, where was Western propaganda when George W. Bush & Co. forever destroyed any semblance of the US Constitution conferring civil and human rights to its citizens, when a false flag 9/11 gun was held to the heads of every congressman and senator, to sign the Orwellian named “Patriot” Act – literally in the middle of the night, never having a chance to read it? America’s corporate whore media was right there, screaming, Sign it! Save us! Protect us! This is how corrupt, Western “democracy” “works” …”

For decades and centuries, in the West, Chinese people suffered from spiteful racism and discrimination. In the United States, Chinese migrants were ridiculed and humiliated at best, and physically liquidated at worst. European powers attacked, occupied, divided and destroyed China, even succeeding in ransacking Beijing.

I wrote entire books (including Exposing Lies Of The Empire) and numerous essays, in which I argued that China, with thousands of years of tremendous history and culture, has undeniable right to be defined and judged by its own people and by its own measures.

But now let’s talk about democracy.

First of all, the expression democracy is derived from Greek language. It loosely means ‘rule of the people’. It doesn’t stipulate that a truly democratic country has to follow a Western multi-party/corporate model, or more concretely, a model in which big corporations and ‘powerful individuals’ are financing political campaigns (while backing the candidates), and de facto selecting the governments.

In the West, and in its ‘client states’, most of the ordinary people are destined to serve the corporate interests, and the government is there to make sure that they do not break ‘the rules’.

China simply cannot follow such model. Chinese people fought hard for their independence, they struggled during the great revolutionary war, and all this in order to create a system which would be serving the people. After great sacrifices, people of China achieved their goal. The system is theirs, it exists in order to improve their lives. It is not perfect, far from it, but it is rapidly evolving into perhaps the most humane system on our Planet.

Chinese corporations are there to serve the people, to serve the nation, and they are told what to do and how to behave by the government and by the Communist Party, not the other way around. Again, it is not as simple as that, and there are problems and setbacks and corruption, but the country is marching forward, irreversibly. Anyone who knows China, knows that the country is improving dramatically, and not only economically but also ecologically, socially and culturally.

Those who deny it either don’t know China, or are simply sore losers.

Unlike in the West, Chinese leaders are listening attentively to their people. China is ‘direct democracy’, and it functions without huge army of political parties. I don’t want to exaggerate and say that the ‘leadership in China is afraid of the people’, but is definitely respecting and listening to them.

It is nothing new: it has been this way for centuries and millennia, since the “Heavenly Mandate” was born. To rule, to be ‘at the top’, could never be taken for granted. To rule, in China, also means ‘to serve’. Arrogance and self-indulgence was rarely accepted, and when it was, it was a warning signal that the country was in decline.

Recently, in Claremont, Ca., I discussed China with a great U.S. Whiteheadean philosopher, John Cobb Jr., who has been, for years and decades deeply involved in China, particularly in the “Ecological civilization” project. He replied:

“I think that in China, many leaders actually do genuinely care about the well-being of their nation.”

Something that could be hardly said about the leadership in the West.

When Chinese people sent clear signals to the top that they want more economic freedoms, more consumer goods, and that they want to be able to freely travel abroad, Deng Xiaoping launched sweeping reforms.

Some people agreed with those reforms; some didn’t. But that is what the majority at that time, truly wanted. Party and the government were only responding to people’s demands.

Decades later, people got tired of so many elements of the market system; of growing inequality, environmental issues and negative by-products of the super-rapid economic growth. And they were listened to again. President Xi Jinping put great emphasis on the environment (“Ecological Civilization”), on the great Chinese culture, and above all on improving lives of all Chinese people no matter where they live. Powerful and progressive model of “Socialism with Chinese Characteristics” was reinvented, improved and put to work with new determination and zeal.

Result: soon, perhaps as early as by 2020, there will be no pockets of extreme poverty, anywhere on the territory of the People’s Republic of China. If this is not socialism, then what really is?

All this is clearly proof of the Chinese democracy at work. Even when there are protests, when people are demanding changes, look closely what many of them are holding in their hands: they are waving the little red flags of the Communist Party of China; definitely not some symbols of the Western regime.

What will be remembered about all this in hundreds of years from now?

While it cannot be denied that several Western countries gave at least some freedom and passable standard of living to their citizens, the price has been paid by the plundered continents, squashed under the Western colonialist and neo-colonialist heels. Tens of millions of non-white people died and are still dying, in order to fulfill tremendous greed and gluttony of so-called Western democracies. I saw it, unfortunately too often, with my own eyes. Only lives of the European and North American citizens are respected and protected, not at all the lives of those who are forced to serve them.

China showed to the world a totally opposite path. Everything in the PRC is created with hands of the Chinese people; with their brains, their muscles and their sweat. It is ‘clean’ and honest progress, not one that is resting on the corpses and blood of the millions of ‘others’.

And that is not all. Brainchild of President Xi, One Belt One Road, is essentially this: “sharing of China’s achievements and success with the rest of the world”, especially with the struggling and unfortunate countries.

China does not turn its success into religion. It believes that everything positive should be shared, that there should be progress, social justice and respect for different cultures. The entire world should be benefiting.

This is true internationalism, and true human decency, as well as unmistakable sign of ‘democracy’, serving all human beings, on truly global scale!

[A shorter version of this essay appeared in Chinese press]