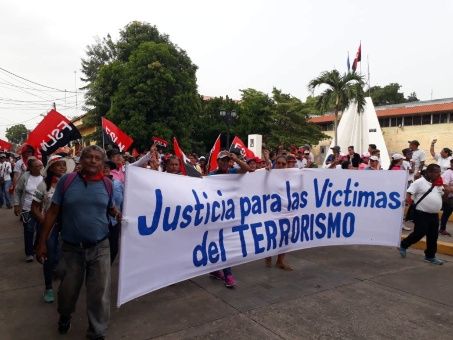 As a member of Amnesty International I am outraged by the complete misinformation of your Urgent Action regarding Nicaragua.Having spent time in the country since the 1980s I have a good understanding of many issues which Amnesty seems to lack. I challenge the claims in your urgent action below and look forward to your response on my comments.

The Nicaraguan government does not have a ‘persecution and criminalisation strategy’ but it does have the right to detain criminals as does any country. The people you list are just two of the criminals or terrorists that have wrecked the peace-loving nation of Nicaragua since mid-April, causing terrible suffering to the poorest and most vulnerable people in Nicaragua.

The police alleged in media outputs that they are responsible for acts of “terrorism”, “arson”, “assaults” and “illegal possession of firearms”, amongst other accusations. They have not yet been formally presented before a court.

Yes, because it is likely they have committed those crimes.

I have watched through Nicaraguan friends’ Facebook pages the thuggery of the groups who have attacked ordinary people and in particular those whose work is in the public sector – teachers, health workers, police officers. I have seen (or partly seen as it was too upsetting to watch) video footage of the torture carried out by the thugs (now detained and who you are urging release of) against decent men and women who have devoted their lives to Nicaragua’s freedom and prosperity. I have seen how the terrorists dragged a family of five out of their simple rural home and torched it, destroying everything leaving already impoverished children and their parents homeless.

My evidence is from reliable sources. Why isn’t Amnesty reporting on this? Should you not be supporting that the perpetrators of these dreadful acts are brought to justice? Nicaragua actually has a fair justice system which is why they have not yet been brought to court. It would be the same in any free country, wouldn’t it? You allow the accused to have a lawyer who then prepares a case?

For years in the eighties when Nicaragua had nothing I was one of thousands who campaigned and raised money for schools. When I visited last year I was delighted to see the good education Nicaraguans now have and some of the fantastic schools, especially in the countryside. I stayed opposite one of the many well-equipped health centres and almost lost count of the number of hospitals and clinics in Managua. Schools, hospitals, health centres, thriving agriculture and growing tourism are all features of Ortega’s presidency, and it is precisely these symbols of progress the thugs and criminals you seek to defend set about destroying after 19 April. Until that date, Nicaragua was the most peaceful country in Central America with low crime – you might like to see how it compares with the terrifying conditions in its northern neighbour, Honduras.

Participating in the ongoing protests throughout the country

Who are terrorists? People who create terror, preventing people from living normal lives by touting illegal arms, their faces covered, subjecting lorry drivers, workers on the land, teachers, nurses to humiliation and very often to beatings. These were not protests but road blocks preventing vital food from being transported, preventing children from going to school and making life more than miserable, terrifying.

I have seen extensive video footage of the protests of peace-loving Nicaraguans with their slogan ‘no mas tranques’ No more road blocks. These were brave ordinary people taking on the thugs and terrorists in loud peaceful protests; ordinary people who were supportive of Daniel Ortega’s government.

I have also seen extensive footage of the huge demonstrations in Managua in support of Daniel Ortega’s government and the need for peace. I’d like to say aerial footage suggests they were the largest demonstrations I have ever seen and entirely peaceful.

In your Urgent Action and in your minimal understanding of Nicaragua and her people, you are asking Amnesty members to defend criminal action!

I now see Amnesty International as an imperialist charity thinking that it knows best for a developing country, taking no account of the views of the vast majority of Nicaraguans. Even worse, you have been duped by the United States’ deliberate efforts to undermine Nicaragua and the more progressive countries where people genuinely do come first.

I have cancelled my direct debit to Amnesty International and I will also be cancelling my membership. Despite all the excellent work I thought you did, my confidence in your organisation is shattered.

I am furious and I urge you to withdraw your Urgent Action on Nicaragua until you have a better understanding of what is really going on.

What’s Left in Nicaragua after Ortega