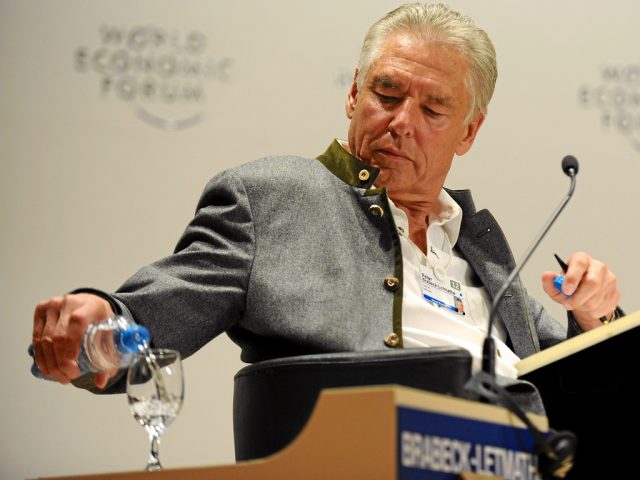 On Thursday April 6th Peter Brabeck-Letmathe, 72 years old, attended for the last time the Nestlé General Assembly as Chairman of the Board. He worked 50 years for Nestlé, 20 years as Chairman of the Board. Nobody can deny that he is a very intelligent man and a brilliant strategist, always ready to defend his ideas in the public arena. He has been so often in films and the media in general that he became a kind of celebrity among CEOs. He and his fellow countryman Arnold Schwarzenegger, with whom he shares much in common, are probably the most well known contemporary Austrians in the world. Their views on economy and politics seem to come as a natural birth-right directly from the Austrian School of Economics, which emerged in Vienna by the end of the XIX century. According to economist Michael Hudson, the Austrian School of Economics surged as “a reaction against socialist reforms. Opposing public regulations and ownership, the Austrian School created a parallel universe in which governments did not appear except as a burden (…)” (1).

In their respective capacities – Peter Brabeck as Nestlé’s CEO and also as a member of the Board of Directors of several other companies; Arnold Schwarzenegger as Governor of California – they did their utmost to protect the world against the evil of the welfare state, to defend private business from government regulations and to hunt down the common good wherever they could find it, preaching the Gospel of Privatization as the salvation of the economy if not of civilization itself. However, it is Peter Brabeck and not Arnold Schwarzenegger who has achieved a deeper and more lasting influence on economy and society at large. It is therefore important to have a closer look at his legacy.

One of Brabeck’s main achievements is the creation of the Water Resources Group (WRG), a mixture of a think tank, a lobby group and a development organization to promote public-private partnerships in the water sector. He is WRG Governing Council Chair and there is no indication so far that he is also going to retire from it. The WRG was founded by Nestlé, Coca-Cola, Pepsi Co and SAB Miller, the giants of the bottled water sector. WRG has other powerful and influential members not directly linked to the bottled water sector, for instance the International Finance Corporation (IFC), a member of the World Bank that provides advice for private sector projects. Philippe Le Houérou, IFC’s CEO, is the WRG Governing Vice-Chair. The Swiss Agency for Development and Cooperation (SDC) is also a member of WRG. The Director of SDC – Manuel Sager – belongs to the Governance Board of WRG, as do the CEOs of Coca-Cola and PepsiCo.

WRG provides the perfect institutional platform for Peter Brabeck to pursue his policy of water privatization at very high levels. The bottling water companies, Nestlé included, have of course much to profit from both water privatization and the dismantling of the public water services. The economic and political power of the WRG can be used to influence governments all over the world. WRG has also an important connection that is often overlooked: in 2015 the giant brewery AB Inbev acquired SABMiller which is a member of the WRG. AB Inbev belongs to the business empire of Swiss-Brazilian Jorge Paulo Lemann, estimated by the magazine FORBES to be the richest man in Brazil and the second richest man in Switzerland. Lemann’s economic empire reaches deep inside the US and Latin America.

Another important achievement of Peter Brabeck is the close working relationship that he established between Nestlé and the military. In the 70’s and 80’s of the last century, Nestlé faced a huge threat to its image and practices by the “Nestlé kills babies campaign”, which was organized by many civil society groups based in Europe and the US. To cope with this challenge, Nestlé hired US Army Intelligence Officer Raphael Pagan, who was responsible for developing strategies to ‘fight’ civil society’s criticisms. This happened before Brabeck became CEO but the experience seems to have been very successful since Brabeck took it to new levels. As Nestlé’s CEO, Brabeck hired John Hedley, an ex-MI6 agent, as Nestlé’s Chief of Security. And it was John Hedley who organized an operation to infiltrate spies inside Swiss civil society groups critical of Nestlé, specially a group called ATTAC. In 2011 Nestlé organized its “Creating Shared Values” international forum in partnership with ‘The Atlantic Council”, a big business organization around NATO. Nestlé US has a special job program for ex-military personnel. Its website says:

“Nestlé is proud to offer numerous opportunities to veterans of the U.S. military, helping them use their unique training and skills within our organization’s various operating companies.”

The close cooperation between transnational companies and military intelligence or the army in general is not unique to Nestlé, but Peter Brabeck was ahead of most other transnational corporations (TNCs) in his engagement for it. The reason for such cooperation is very simple: TNCs and the financial sector are the main driving forces behind neoliberal policies, this form of extreme right-wing market fundamentalism that is deeply undemocratic. One of the main political instruments of the neoliberal project is privatization, which means basically to turn common good into private profit – something that by definition is not going to get much popular support… Therefore, neoliberal policies are bound to face much popular resistance and can only be implemented either by violence or deception. Military intelligence can provide much information on how civil society is organizing itself against the corporate takeover of both democracy and natural resources, thus providing corporate power with some important means to protect itself.

Moreover, most of the natural resources fundamental to the TNCs are located in southern countries where cooperation with the military can be very useful to fight attempts by local governments and populations to use its natural resources for their own development, the supreme crime in the view on the neoliberal establishment. This is what happened in Chile when the elected government of Salvador Allende began to nationalize some of Chile’s natural resources and use them for the development of Chile and not for the profit of the multinationals. The powerful international establishment first reacted with economic war and, when it didn’t work, with a full force coup d’état under the leadership of General Augusto Pinochet. What followed was a war against the Chilean population that lasted for many years, resulting in thousands of people killed or disappeared. From the neoliberal point of view a successful story: Pinochet did implement a complete neoliberal government program. Peter Brabeck had the opportunity to see what Pinochet was doing from very close: he was there. The beginning of his career in Nestlé was in Chile at exactly that time. He must have been impressed by the way Pinochet was dealing with the resistance of the population against privatization policies.

However, open violence on behalf of unpopular policies is not always possible and then the neoliberal project resorts to deception, trying to hide the real aims of its policies and to convince the general population that it is actually working for their benefit. Thus the private companies pushing for the privatization of the public services through the Trade in Services Agreement (TISA) for instance, call themselves the “Real Good Friends of Services”. In the same way, Peter Brabeck calls “Creating Shared Value” how Nestlé is “delivering a long term positive impact for shareholders and society”. Water as a common good is our most precious shared value and Brabeck’s privatization policies are a clear attack against it.

Above all, the neoliberal project tries to hide itself. “Project censored” – an initiative to expose and oppose news censorship – pointed as the “Top Censored” story of 2015: “Half of the Global Wealth Owned by the 1%”. This year – 2017 – more than half of the Global Wealth is owned by the richest 1%. In fact, just 8 men own the same as half the world, a clear statement about who is actually benefiting from the neoliberal policies and privatizations. Not by chance, in the same year of 2015, the 4th “Top censored” story was: “Popular resistance to corporate water grabbing.”.

Water privatization and water grabbing go hand in hand with the accumulation of wealth for the top 1% class to which Peter Brabeck belongs – a fact that he does his best to hide. He also managed to silence most of the politically engaged Swiss NGOs, aware of the fact that public discussion and criticisms of Nestlé in Switzerland – its home country – could have a very negative impact on Nestlé’s image.

The retirement of Peter Brabeck, the end of the Brabeck era, however, coincides with the end of the neoliberal project itself, its credibility eroded, its real aims disclosed. Everywhere in the world resistance movements are growing and country after country are strongly rejecting neoliberal policies. Those who were celebrating the end of the “pink tide” in Latin America, when progressive governments in Argentina, Bolivia, Paraguay, Brazil, Ecuador and Venezuela came to political power, should take another look at what is happening in the continent now. The people in Ecuador elected Lenin Moreno as President, the candidate supported by Rafael Correa; in Argentina the neoliberal policies of President Macri, which increased the poverty of the population just a few months after his election, is now facing a huge resistance by the people and a general strike that paralyzed the whole country. What Macri has achieved in Argentina so far can not be called a success and it is doubtful that he will be reelected, to the dismay of the neoliberal class. In Brazil, where a parliamentarian coup d’état was needed to implement a full neoliberal program and to start the privatization of the country’s public assets, the illegitimate government of President Michel Temer is falling into pieces. And despite the mainstream press campaign against ex-President Lula, it is he who appears in all polls as the one with more popular support to win an election. And Venezuela, despite an economic war similar to the one launched against President Allende in Chile and an international press campaign against its government, continues proudly in its policy of using Venezuela’s natural resources for the benefit of its own population, with impressive results such as its housing and literacy programs. As things stand however, any concrete and positive result achieved by alternative polices to the neoliberal creed must be downplayed or utterly ignored by the mainstream press, neoliberalism’s most important ally. Nevertheless, the signals of the times are clear and the neoliberal project is at an end.

Peter Brabeck’s successor in Nestlé will not be able to do as much as Brabeck himself did for the neoliberal project. And he will have to be much more careful in dealing with civil society’s critical movements, because in the end, we, the people, will decide which place he and Nestlé may have in the future.