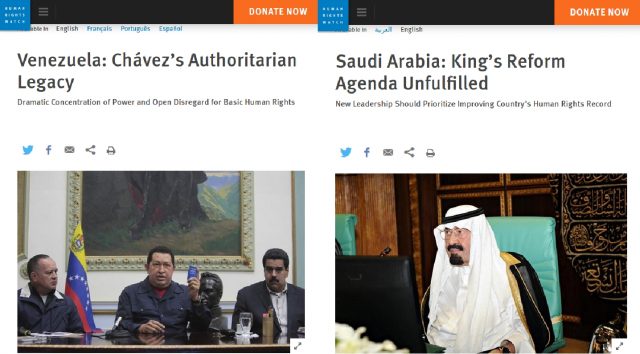 Joe Emersberger writes on how those who stand against the US are demonised as dictators, even if they have been democratically elected, while those who serve the US agenda are showered with praise, even if they are actual dictators.

Thanks to the “free press” how many people would know any better? Even Bernie Sanders’ campaign was ignorant (or dishonest) enough to call the late Hugo Chavez a dictator. Hugo Chavez and current president Nicolas Maduro were both democratically elected, but when Washington (and its accomplices in Ottawa and London) want a foreign government overthrown the corporate media is always eager to help. Facts will not stand in the way.

When the media isn’t calling Maduro and Chavez dictators outright, it does all it can to insinuate that they are. It is unsurprising that they simply label them dictators from time to time. Almost two decades of propaganda pays off.

But surely a more liberal outlet, like say the Guardian in the UK, would be better – less subservient in its reporting to the foreign policy objectives of the US and its allies.

Well no. Not at all.

In recent days the Guardian has been passing off unabashed PR pieces for Saudi Arabia – perhaps the most brutal and backward dictatorship on Earth – as news articles. Saudi Arabia is also being heavily armed by the US, UK and Canada as it perpetrates a slaughter in Yemen, so it literally gets the royal treatment from the western press.

Below are two stomach churning examples from recent days. 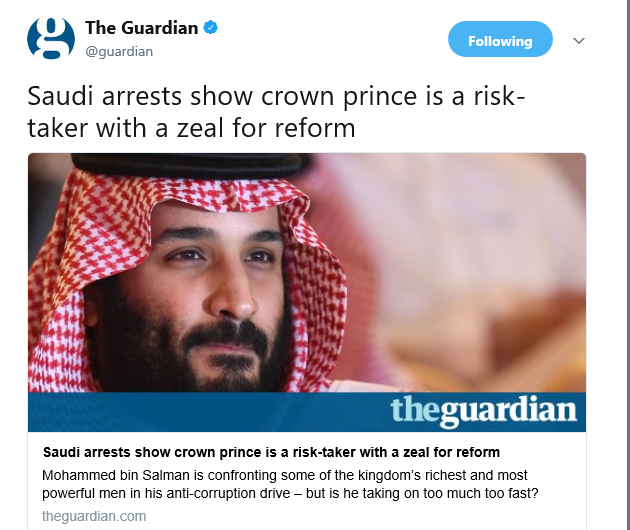 As FAIR pointed out, hyping “reform” in Saudi Arabia has a been regular feature of corporate news for at least the past 15 years, especially for one high profile pundit. Any reader who casually imbibes corporate media “news” over the past two decades will be dismayed by “repression” in Venezuela but feel hopeful about “reform” in Saudi Arabia. The propaganda system works and big NGOs like Human Rights Watch are part of it, not just the corporate media.

Consider how Human Rights Watch wrote about the death of King Abdullah in Saudi Arabia. 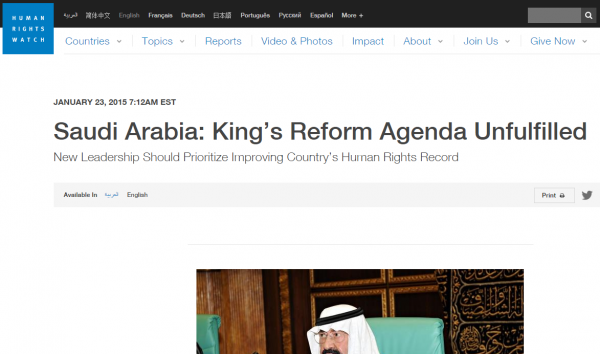 Mild criticism combined with upbeat spin about “reform” for the late US–armed beheader-in-chief.

Now consider what Human Rights Watch put out a few hours after the death of Chavez.

Harsh criticism and not a positive word about a democratically elected president who greatly reduced poverty in his country despite the US-backed opposition’s efforts to overthrow him by force.

Recently, Ken Roth, head of Human Rights Watch, called Nicolas Maduro a “buffoon” on Twitter. I reminded Roth that he called his own mass murdering government “the world’s most powerful proponent of human rights”.

Do you want rich western states to have civilized foreign policy? Prepare to do battle with liberals like Ken Roth and the editors of the Guardian.