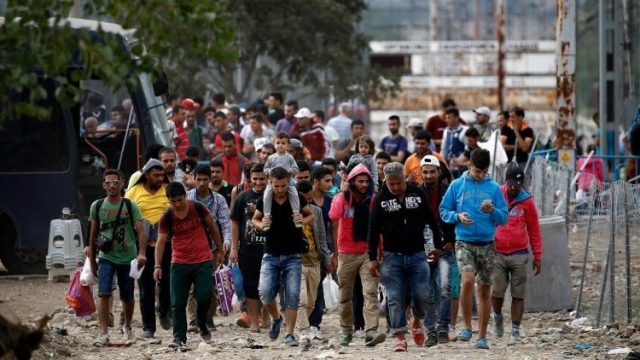 ‘Responsible’ wheeler-dealers continue to demand the payment of the debts of the countries in the Global South (the loans have contributed nothing to human and social development), considering that the pillage of these people has nothing to do with the migratory phenomenon. They know, with their new ‘star’ in the Elysée, that there is no alternative to the market economy which, according to them, achieves the miracle of satisfying the general interest.

Much has been said about the treatment of migrants in the member states of the European Union that claim to be ‘receiving countries’. We also know about the repression suffered by the voluntary workers and their associations who take on the responsibility of helping the migrants (in Calais and in the Roya valley, near Nice). Apart from Greece and Italy, which for geographical reasons receive, for better or for worse, the waves of migrants who have survived the crossing of the Mediterranean, the other states have been making every effort to turn back these ‘foreigners’ from the South and limit as much as possible the demands for asylum.

This shows up the deficiencies of the European Union. It is indeed only a Europe of business, of social discrimination and of unequal taxation that is very profitable for some companies seeking speculative ‘optimization’ of the way in which it is imposed.

In France, with ‘macronization’ in power, following in the steps of Sarkozyism and Hollandeism, the effort is to reduce the entry of migrants into national territory at the same time as trying to save appearances by its so-called spirit of adventure and Europeanism.

With the aid of a cohort of small businessmen who have been promoted to parliamentarians and of large banks, as well as of Medef which appreciates the personal power of the ‘young cadre’, President Macron, whose style is half evangelism and half bonapartism, the new ‘pragmatic’ rightwing is trying to welcome only the ‘useful’ migrants and to get rid of the others, no matter where to, particularly those designated as economic refugees.

The little troop of Kouchnerians no longer exists to serve the national institutions. They are now silent. Drowned Africans and Arabs and the sea cemetery of the Mediterranean are no longer of any interest to the ‘professionals’ of political humanism: they are not, like the boat people, the victims of a communist state or a state that is an enemy of the West. They are, above all, the victims of under-development and the conflicts caused by utter destitution, that has been exacerbated by the interference of the big powers.

France does not believe that it needs all these poor people: gone are the times when the deputy from the Réunion, Michel Debré, was sending the children of poor indigenous people to the metropolitan area of France to re-populate the countryside.

The manipulation of public opinion to support human rights has been used in the past but it has come back to be turned against its protagonists, the false champions of humanitarianism. It is all ‘security’ now – “there are terrorists among the migrants” who are threatening Western civilization. “The greatest possible prudence must be exercised when confronting this mob of black and dark-skinned people”, mutter people in the affluent areas! Not to mention that it is threatening Christianity!

As for the ‘responsible” wheeler-dealers, they continue to claim the payment of the debt of the countries of the Global South (these loans have not enabled human and social development), considering that the pillage of these people has nothing to do with the migrant problem. They know, with their new ‘star’ at the Elysée, that there is no alternative to the market economy which, according to them, achieves the miracle of satisfying the general interest. In Latin America, Africa and Asia, those who contest the “evidence’ are nothing but Marxist trouble-makers and archaic thinkers who understand nothing about the ‘laws’ of the economy.

Moreover, the old social-democrat ‘New Left’, like the old right of the former leader Fillon, which has been reconnected to the business world – from which they never really left – are also supporters, as in the 19th century, of this ‘liberalism’ which has so much respect for the ‘dignity’ of people at a time of all-powerful clericalism!

However, the strategy of these political castes is full of contradictions:

1. They claim to be “attentive to the interests of the African people”. In reality they are only concerned to block migrants on their own territories, for example in Chad, Niger and – the supreme paradox – Libya, which has been reduced to chaos by France but which can still be used, in spite of the disorder, to prevent the exodus to France. By disbursing some funds this can be done and never mind that the migrants are subject to all kinds of suffering in a country without a State.

2. They also claim to be ‘respectful of the law’. France signed the Universal Declaration on Human Rights and the 1951 Convention on Refugees but apparently the mainstream media has forgotten. Some of their provisions are, however, far from being respected.

Articles 1, 31 to 33 of the 1951 Convention specify that it is forbidden to expel or to turn back refugees to a country that is unstable; even if they have entered the national territory irregularly. There can be no legal penalties for entry and an irregular stay. When there is a massive influx, refugees must be given temporary asylum and assistance in the receiving country, while waiting for a longer-term solution. Asylum must be granted by the receiving state in cases of political, racial, religious and sexist persecution. In no case is the turning back of refugees allowed: the refugee who has made the request may become a ‘candidate’ in another country. The ‘non statuary’ refugees, particularly minors, must receive treatment that respects their dignity by the countries in which they find themselves, particularly minors.

In the EU framework, in 1985, 1990 and 1992, there were agreements that regulated circulation within the Member States that determined the country responsible for exercising the asylum request, with the UN High Commission being responsible for overseeing the whole process.

In other words, the political practice of France and other European states in no way conforms to these juridical requirements which are quite unknown to simple citizens and sometimes even questioned by simple tribunals! On the contrary, governments find refugees useful scapegoats, cultivating – without always seeming to do so – racism and xenophobia.

3. Europe has ‘a Christian culture’. Peoples’ rights are vigorously demanded, especially in France. Fillon had his strongest supporters from the ‘good’ Catholics, without provoking secular reactions from the social-democrats who are used to all kinds of compromise.

And now, on 15 August 2017, Pope Francis has demanded respect for 21 measures on behalf of migrants, with the mass media maintaining a deafening silence, including those who applaud all pontifical declarations, as long as they are restricted to problems of sex and family.

Pope Francis demands “the granting of humanitarian visas’ to be delivered ‘on a wide scale and in simple language’, giving priority to the ‘regrouping of families’. He also makes a specific demand for ‘special temporary visas’ for those fleeing from conflict, as well as a ban on collective and arbitrary expulsions. He calls for priority to be given to ‘the security of people over national security’ and that suitable training be given to the personnel controlling the frontiers so that the “first reception of migrants be appropriate and dignified.”

It is indispensable, he adds, to protect migrant minors and to ensure their access to education. All migrants should benefit from the national health system and be free to practice their profession and their religion. The receiving countries must help the developing countries that are taking in refugees (which they are doing on a much more massive scale in Africa than in Europe), etc.

There is no likelihood, in France or in other Member States of the European Union, that these demands will be met. The censuring of the pontifical letter of 15 August made it possible, even for Catholics, to ignore this ‘subversive’ message!

No doubt Christians in France, like Macron in power, as well as the Republican party, which is in a state of failure, will not take any notice of the pontifical message.

“Realism” lies in the opposite direction: the citizens of the Western nations must continue to represent the centrality of the human being. But Pope Francis is considered as being too involved in politics, irresponsibly encouraging the migratory movement towards Europe!

Bernanos, the Catholic writer, already said it: “Realism is the common sense of scoundrels!”

Translated from French by Victoria Bawtree