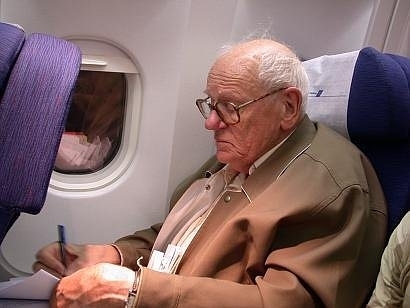 Just a few days ago, Alex Anfruns, my young colleague at Investig’Action, was exchanging emails with François Houtart about the translation of the latest article of his we published on our website. And then came the sad news! [François Houtart passed away on June 6] We knew he was 92 years-old, but he seemed indestructible. It was a bitter blow.

I picture the image of François on that night flight that took us to La Paz, Bolivia, for a meeting of the network of “Intellectuals and Artists in Defense of Humanity”. Some friends from this network were also on board. François, as always, was working on a report of some meeting that had taken place in a country he had just visited. A Latin-American friend whispered to me:

– Do you know the difference between God and François? (la diferencia entre Dios y François)

– Well, God is everywhere, whereas François has been everywhere!

To appreciate the joke, one ought to know a little about this tireless peace globetrotter. Despite his advancing years, François would not stop travelling around the world, never hesitating to lend his presence, his support, his clear and strong opinions to all suffering peoples, be they Colombians facing paramilitary militias and death squads, Nicaraguans choked by US aggression, Filipinos who fell victim to crimes against humanity from many regimes, Vietnamese, and many others. And even though we are both from Belgium, whenever we met, it was almost always “anywhere in the world”.

Hugo Chávez, a proponent of these precious meetings of the network of intellectuals and artists, was an avid admirer of François, who played a driving role, but always modestly and discretely.

François Houtart was a true moral conscience of alter-globalisation. A founder of the Social Forum of Porto Alegre, he fought tirelessly to ensure that those resisting in the Global South and North could meet each other, openly discuss and cooperate in the resistance against colonialism in all its forms.

François was also a simple man, modest and warm. When my daughter Marie passed away in 2005, the words he sent me, him being a firm Christian and me a firm atheist, were incredibly beautiful and comforting.

François was, in my eyes, a thousand times more worthy of the Nobel Peace Prize than Barack Obama (!), the European Union (!) and other impostors.

Our team at Investig’Action was in the course of preparing a documentary about his life and work. It seemed important to me to preserve the historical memory and life’s work of such an exceptional man. We will do everything to complete this work and pay him an hommage that is a thousand times merited.

For a better world to be possible, we will need many new François Houtarts to come about!

Massacre of Black people by « democratic rebels » – Investig’Action had met the victims.