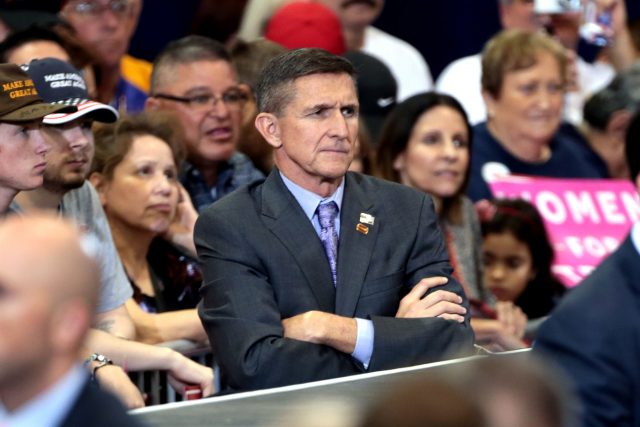 When Congress authorized Robert Mueller and his team of lawyers to investigate “links and/or coordination between the Russian government and individuals associated with the campaign of President Donald Trump,” opponents of the president sensed that sooner or later, hard evidence of Trump’s collusion with the Russian government would emerge.

Seven months later, after three indictments that did little, if anything, to confirm the grand collusion narrative, Mueller had former National Security Council advisor Michael Flynn dragged before a federal court for lying to the FBI. The Russia probe had finally netted a big fish.

As the details of the Flynn indictment seeped out into the press, however, the bombshell was revealed as another dud. To the dismay of many Trump opponents, nothing in Flynn’s rap sheet demonstrated collusion with Russia. Instead, the indictment undermined the Russiagate narrative while implicating another, much more inconvenient foreign power in a plot to meddle in American politics.

According to plea agreement Flynn signed with Mueller, Flynn admitted to lying to the FBI about a phone call he placed to the Russian ambassador to the US, Sergei Kislyak, during the transition period between the election and inauguration — not during the campaign. Flynn’s first order of business with the Russian diplomat was to beseech him not to retaliate for sanctions imposed by Obama on Russia for still-unproven allegations that Russian intelligence agencies hacked the Democratic National Committee. In other words, Flynn was caught trying to influence Russia, not the other way around.

The only area where Flynn proposed any form of coordination with Russia was in defeating ISIS and Al Qaeda in Syria. The Trump administration’s attempts to collaborate with its Russian counterparts in Syria have been the target of relentless sabotage from an opportunistic media and Obama era national security officials who considered the catastrophic semi-covert operation to arm Syrian insurgents a part of their legacy. Thanks to stifling Cold War atmosphere these elements have cultivated in Washington, the US has been reduced to an impotent bystander while Russia, Iran, and Turkey have joined together to impose an end to the proxy war that has ravaged Syria for the past five years.

To be sure, Flynn indictment did contain a stunning revelation of collusion between Team Trump and a foreign state. But it was not the country that the national media has obsessed over for the past year.

Flynn was found by the FBI to have lobbied Kislyak to exercise Russia’s veto against the passage of a United Nations security council resolution condemning the growth of Israel’s illegal settlements. And he did so under orders from Jared Kushner, the presidential son-in-law and Middle East fixer, who was himself acting on behalf of Israeli Prime Minister Benjamin Netanyahu.

Thanks to Flynn’s indictment, we now know that the Israeli prime minister was able to transform the Trump administration into his own personal vehicle for undermining Obama’s lone effort to hold Israel accountable at the UN. A clearer example of a foreign power colluding with an American political operation against a sitting president has seldom, if ever, been exposed in such glaring fashion.

The day after Kushner was revealed as Flynn’s taskmaster, a team of researchers from the Democratic Super PAC American Bridge found that the presidential son-in-law had failed to disclose his role as a co-director of his family’s Charles and Seryl Kushner Foundation during the years when his family’s charity funded the Israeli enterprise of illegal settlements. The embarrassing omission barely scratched the surface of Kushner’s decades long relationship with Israel’s Likud-led government.

During the 1990’s, a teenaged Jared Kushner was forced to vacate his own bedroom so Netanyahu had a place to stay when he was in New York City for business. Since at least 2006, the Kushners have donated at least $315,000 to the Friends of the IDF, the American fundraising arm of the Israeli military, and tens of thousands of dollars to illegal Israeli settlements in the occupied West Bank, from Beit El to Gush Etzion.

The Kushner family foundation has even donated to the Od Yosef Chai yeshiva, a West Bank-based Jewish religious institution that has served for a base of radical settler terror attacks against Palestinian villagers. The yeshiva has been led by a pair of rabbis who produced a genocidal tract that the Israeli newspaper Maariv described as “230 pages on the laws concerning the killing of non-Jews, a kind of guidebook for anyone who ponders the question of if and when it is permissible to take the life of a non-Jew.”

To orchestrate his futile attempt to scuttle a diplomatic imperative of the Obama administration, Netanyahu drew on these deep ties to the Kusher family. There are troubling indications that his intelligence agencies shared material that it gathered by spying on the US with Kushner and the Trump transitional team.

Eli Lake, a neoconservative columnist for Bloomberg who frequently relies on sources from both Trump and Netanyahu’s inner circles, reported that Israel’s “envoys shared their own intelligence about the Obama administration’s lobbying efforts to get member states to support the [UN] resolution with the Trump transition team.”

The subtext here was clear: Israel, a country that surveilled American diplomats during Iran deal negotiations in 2015 and which is notorious for its espionage across the West, had spied on the Obama administration during the lead-up to the UN vote and shared its “intelligence” with the Trump team. Once again, collusion has seldom been demonstrated as clearly or disturbingly as this.

So why isn’t this angle of the Flynn indictment getting more attention? An easy explanation could be deduced from the stunning spectacle that unfolded this December 2 at the Brookings Institution, where the fresh-faced Kushner engaged in a “keynote conversation” with Israeli-American oligarch Haim Saban.

“You’ve been in the news the last few days, to say the least. But you’ve been in the news about an issue that I personally want to thank you for, because you and your team were taking steps to try and get the United Nations Security Council to not go along with what ended up being an abstention by the US,” Saban remarked to Kushner. “As far as I know there was nothing illegal there but I think that this crowd and myself want to thank you for making that effort.”

Kushner nervously scanned the room, mumbled “thank you” to his host and forced an uncomfortable smile.

Saban’s political background lent special significance to his robust defense of Trump’s son-in-law. Having earned his fortune in television and the Israeli telecom industry, he has become one of the Democratic Party’s most generous individual donors. Saban’s millions funded the construction of Democratic National Committee’s headquarters and filled the campaign coffers of Bill and Hillary Clinton. In 2012, as a reward for Saban’s handsome Super PAC donations to Obama, the president nominated the billionaire’s wife — a former Playboy “Disco Queens” model and children’s fashion designer with no diplomatic experience — as special US representative to the United Nations general assembly.

The spectacle of a top Democratic Party money man defending one of the Trump administration’s most influential figures was clearly intended to establish a patina of bipartisan normalcy around Kushner’s collusion with the Netanyahu government. Saban’s effort to protect the presidential son-in-law was supplemented by an op-ed in the Jewish Daily Forward headlined, “Jared Kushner Was Right To ‘Collude’ With Russia — Because He Did It For Israel.”

While the Israel lobby ran interference for Kushner, the favorite pundits of the liberal anti-Trump “Resistance” minimized the role of Israel in the Flynn saga. MSNBC’s Rachel Maddow, who has devoted more content this year to Russia than to any other topic, appeared to entirely avoid the issue of Kushner’s collusion with Israel.

There is simply too much at stake for too many to allow any disruption in the preset narrative. From the journalist pack that followed the trail of Russiagate down a conspiracy infested rabbit hole to the Clintonites seeking excuses for their mind-boggling campaign failures to the Cold Warriors exploiting the panic over Russian meddling to drive an unprecedented arms build-up, the narrative must go on, regardless of the facts.

Max Blumenthal is a senior editor of the Grayzone Project at AlterNet, and the award-winning author of Goliath, Republican Gomorrah, and The 51 Day War. He is the co-host of the podcast, Moderate Rebels. Follow him on Twitter at @MaxBlumenthal.