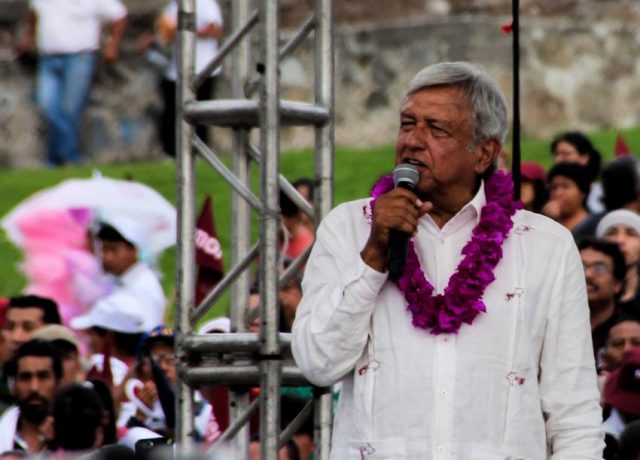 Mexico’s left-wing Morena movement stormed the presidency and appear poised to flood both houses of congress, despite an election marred by violence and allegations of irregularities.

At the time of writing, Morena’s presidential candidate Andres Manuel Lopez Obrador (abbreviated to AMLO) had declared victory in the July 1 election with 53.5% of the vote. That figure was based on preliminary results released by the National Electoral Institute (INE) on July 2, after just over half the ballots had been counted.

All of AMLO’s key contenders had already conceded defeat by the evening of July 1.

AMLO’s victory went far beyond his traditional stronghold of Mexico City, with preliminary results showing he secured majority support in more than 20 of 31 states.

Preliminary results also showed Morena and its allies were on track to take an easy majority in the lower house, the Chamber of Deputies. At the time of writing, the Senate remained up for grabs, though Morena had a clear early lead.

The final results are due in late July.

In a victory speech in Mexico City, AMLO promised a crowd of supporters he would deliver on “profound changes” and the establishment of “an authentic democracy”.

“The [Mexican] state will stop being a committee at the service of a minority, and will represent all Mexicans: rich and poor; people of the countryside and the city; migrants; believers and non-believers; human beings of all currents of thought and of all sexual preferences,” he said.

While vowing to deliver on the deep social reform demanded by his supporters, the president-elect nonetheless struck a conciliatory tone. Addressing those who “voted for other candidates and parties”, AMLO called for all Mexicans to strive for “reconciliation and to put personal interests, no matter how legitimate, in the general interest”.

“We will listen to everyone, we will aid everyone, we will respect everyone, but we will give preference to the most humble and forgotten; especially, to the Indigenous peoples of Mexico,” he said, adding, “For the good of all, the poor first!”

AMLO’s overwhelming victory came despite widespread allegations of electoral irregularities and political violence. According to consultancy firm Etellekt, during the 2018 election season there were more than 130 political killings nationwide.

Some of the high profile cases of electoral day violence included a woman being shot outside a voting centre in Tabasco, a Worker Party-affiliated activist in Michoacan being killed and the eruption of gunfire in Guanajuato. In Puebla, police arrested five armed men who have been accused of plotting to attack the home of a Morena representative.

Amid the violence, the INE has admitted that at least 20,000 ballots were stolen.

However, these cases failed to change the outcome of the national vote, with Morena’s win largely lining up with months of polls predicting an easy AMLO victory.

“Democracy triumphed despite all the efforts to manipulate the results,” said Jose Luis Granados Ceja, an electoral observer with the Scholar and Citizen Network for Democracy.

Like in previous elections, allegations of vote buying were common across much of Mexico, with all major parties being accused of participating in the practice. Individual voters were offered anywhere from MX$500-1500 (US$25-75) in cash, gift cards or other handouts, according to Granados.

“Another method that’s often seen is conditioning of social programs, and we see this in the more marginalised areas of Mexico,” he explained, noting that entire communities can be compelled to exchange their votes for basic social services.

“For example in [the Mexico City community of] East Jalapa, they were heavily affected by an earthquake [last year]. And the political operatives there basically said, ‘We’ll give you money and resources for reconstruction … but only if you vote for us.’”

In that case, the community refused.

“As a result, they’re neglected, and continue to live in tents provided by international aid organisations,” Granados said.

However, the most widespread cause of frustration for many Mexicans was the shortage of ballot papers. Voters are typically required to vote in their registered municipality, though workers outside their hometown could opt to vote at special centres.

These special voting centres, however, were limited to 750 ballots each.

By mid-morning, social media was already afire with voters complaining their centres had already run out of ballots. In some parts of the country, the ballot shortages sparked spontaneous protests.

Granados said the INE “should have known better”.

“I think this is yet again an indication of the lack of organisation from the INE; to only provide 740 ballots in these special locations is just inviting conflict, and we had reports of people literally banging on the doors, saying we want to vote,” he said, arguing this situation could have been “easily prevented”.

“This sort of thing is dangerous,” he said, warning the ballot shortages contributed to other organisational issues at voting stations across the country. According to Granados, his group of electoral observers also repeatedly ran into problems he said were caused by the inadequate training of voting station personnel and poor coordination with host venues like schools.

“Of all the voting stations I visited, none were open on time. This was because of people running late, people arriving unprepared; in some places, the principals of schools hadn’t even turned up to open the gate, meaning authorities had to cut the gates open,” he said.

Cumulatively, these organisational failures were “symptomatic of a lack of organisation … and a deliberate attempt at voter suppression.

“If you’re a working class Mexican and you go to vote at 8am before work, but can’t, then that’s an unacceptable case of voter suppression.”

Nonetheless, Granados said the vote represented a major step forward for Mexico, which effectively spent most of the 20th Century under one party rule. After holding power for generations, in 2000 the conservative Institutional Revolutionary Party (PRI) lost to the right-wing National Action Party (PAN), and the two have traded power since.

This year’s election is the first time in modern Mexican history that a left-wing party has won the presidency.

“A lot of academics consider 2000 to be the moment of change for Mexican democracy. But I think [the election] last night truly represents the birth of Mexican democracy,” Granados said, adding, “It’s now contingent on the Mexican people to make sure this really does represent change.”

A career politician, this election was AMLO’s third attempt to win the presidency. However, this is not his first time in office.

He left office with an approval rating of 84% — a rarity in Mexican politics.

Now, AMLO is promising to roll out the same mix of infrastructure development and generous social spending nationwide.

He has also vowed to increase the minimum wage by 15.6% annually, reform NAFTA to include better labour protections, reconsider Mexico’s controversial energy privatisation reforms and work with teacher unions to redesign the education system.

Finally, like other candidates in the presidential race, AMLO has vowed to take a tough line on corruption — the key issue in this election.

AMLO and his Morena party have been accused of corruption in the past although, for progressives, his biggest stumbling block was his stand on social issues. AMLO has stated he has no intention of pushing for changes to the status quo on same-sex marriage and abortion rights. While the former is partly legal under a patchwork of state laws, abortion remains severely restricted nationwide.

“If it is already in the law, if it is already approved, it is maintained,” AMLO said in a recent interview. “Given the serious state of the country, the depth of the crisis, we are making a kind of truce … that things remain as they are; a provisional suspension,” he added.

AMLO’s “truce” on social issues included running for president in a coalition with the conservative minor party, Encuentro Social (PES). Staunchly evangelical, PES opposes same-sex marriage, pornography and abortion. AMLO has stated the PES doesn’t represent his social views, and that he isn’t a conservative.

“[To be] conservative is to be in favour of inequality, not to do anything about the corruption,” he said. “I am not conservative … and I will respect all opinions, and all points of view.”