In an unprecedented move, the foreign ministers of Brazil, Argentina and Paraguay have refused Venezuela’s participation in the meeting of Mercosur of December 14th, in Buenos Aires. Venezuela’s “Chancellor of Dignity”, foreign minister Delcy Rodríguez, criticised the “Triple Alliance” for attempting to deal a final blow to the Latin American integration process that was initiated by Hugo Chávez.

Flanked by her Bolivian counterpart, David Choquehuanca, the Venezuelan minister of Foreign Affairs traveled to the meeting to denounce the illegality of the meeting that was set up by Argentina, and recalled that Venezuela remains the holder of the Mercosur Presidency. In fact, Argentina is only scheduled to take over the presidency on January 1st.

Following the Triple Alliance’s declaration in favour of “suspending” Venezuela from this regional body, Venezuela appealed to a conflict resolution protocol (called “Protocolo de Olivos”) and received the backing of Tabaré Vázquez and the Uruguayan government. After her visit to Argentina, Delcy Rodríguez traveled to Montevideo on December 15th to pursue further negotiations.

The “imperial seal” of the triple alliance

During the rotation of Mercosur’s presidency that took place on August 1st, the governments of Temer, Macri and Cartes made no effort to recognise (1) the transfer of the office from Uruguay to Venezuela and refused to take place in the traditional summit of presidents of Mercosur. The reason given was an alleged breach of respect for democratic freedoms committed by Nicolas Maduro’s government. In this sense, it is worth recalling that in its July 2015 report, the United Nations Human Rights Committee had approved the policies of the Venezuelan government, and lauded the application of the “International Covenant on Civil and Political Rights” (ICCPR) (2). Not only that, unlike Brazil, Uruguay and Argentina, Venezuela is the only country to have signed the “commitment to democracy of the Montevideo Protocol of Mercosur” (Protocol of Ushuaia II). As for Paraguay, it explicitly voted against ratifying it in October 2012.

The representatives of the Triple Alliance have repeatedly voiced their support for the Venezuelan right and have called into question Venezuela’s takeover of the rotating presidency of Mercosur, labelling it an “authoritarian regime”. In reality, what the Triple Alliance was hoping for was a repeat of the “soft coup” that had succeeded in Brazil, this time in Venezuela.

With no valid arguments to exclude the country of Simon Bolívar, the Triple Alliance has hidden behind a wall of accusations with highly doubtful or nonexistent legal grounds. After initially evoking the excuse of respect for human rights, this past December 2nd the Triple Alliance notified Venezuela of its “suspension due to unfulfilling of obligations” of the Protocol of Accession of 2012. However, the charge of insufficient implementation of Mercosur norms is ludicrous, given that in four years the Bolivarian country has adopted 1.479 out of a total of 1.563 norms. In other words, Venezuela has implemented 295 norms per year, on average, while Paraguay, Uruguay, Brazil and Argentina have averaged 36-44 norms implemented per year. (3) 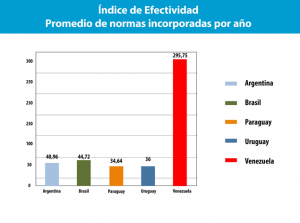 Average number of Mercosur norms implemented per year by each country

But the heart of the matter lies in the lack of moral authority of the Triple Alliance governments. Recall that, prior to winning the elections, Mauricio Macri promised “change”. One year later, his most important measures are far from generating any enthusiasm from the Argentinean people. The layoff of two hundred thousand workers and the revelations of tax evasion in the Panama Papers earned him a lot of criticism. As for the imprisonment of Milagro Sala, activist known for her defense of housing rights in Jujuy, that has generated a wave of international solidarity that keeps on growing. By the end of November, the UN Working Group on Arbitrary Detention called for her immediate release, with her time in prison now approaching a year. (4)

For their part, the governments of Paraguay and Brazil are the result of two coups, thus not very credible in what concerns giving others lectures on democracy… In Paraguay the parliamentary process that resulted in the destitution of president Fernando Lugo took place after an investigation on the repressive actions of police forces in clashes with peasants. Nevertheless, four years later, the responsibility for the massacre of Curuguaty has yet to be clarified, in spite of the efforts from progressive groups and political forces. (5)

In Brazil, the illegal impeachment of Dilma Rousseff was the result of a bitter media and judicial campaign, without any proof of her implication in the corruption schemes being provided. After that, a wide program of budget cuts concerning education and healthcare was quickly put in motion through a constitutional reform (Constitutional Amendment Proposal called PEC 55). A group of social movements has denounced this controversial proposal to the Organization of American States (OAS). (6) Its goal is to freeze any and all public sector investment for a period of 20 years. Ironically, the main culprit of Dilma Rousseff’s impeachment, former President of the Chamber of Deputies Eduardo Cunha, was sentenced to prison for corruption in the case of Petrobras.

With no legitimacy, the Latin American rightwing is on the offensive, rushing to dismantle the achievements of its predecessors in terms of social progress and the fight against inequality and poverty. The enmity shown towards the Bolivarian process is but a measure of the conscience of the fragility of its own project, based upon the plundering of the peoples futures. In fact, since Mauricio Macri’s victory in the Argentina elections one year ago until Michel Temer’s rise to power after the Brazilian coup, the rightwing has had as its main goal the destruction of the legacy of the “golden decade” that put an end to the long night of neoliberalism.

As Venezuela’s foreign minister has indicated, Temer, Macri and Cartes view the role played by Venezuela as a member of Mercosur as “an obstacle to free trade negotiations”. She also warned of a larger plan behind this attack: “its not just the action of one official, it’s a plan of (conservative) restoration.” Rodríguez mentioned that the attack against Mercosur is just the first step of a “historical process of capital dismantling political gains”, and that the following phase would be the “dismantling of other regional integration bodies such as UNASUR and CELAC”. (7)

In the 1990s and early 2000s, the crisis of neoliberalism reached its peak with the “corralito” in Argentina. This prescription looked to have its days numbered since Lula, Kirchner and Chávez rejected the ALCA treaty in 2005, in Mar del Plata. With Venezuela joining Mercosur in 2012, the dynamic of the Bolivarian integration process looked irreversible. But it is now threatened by the emergence of this conservative Triple Alliance. Moving forward, this strategic geopolitical alliance between the Southern Cone and Brazil will no longer work to defend the peoples of our America.

But history shows us that swings to the right can have unexpected consequences. Could the Triple Alliance be digging its own grave? It is in the peoples interests to unite against the oppressors. It is time for the second independence, meaning the social and economic emancipation of Latin American peoples, to finally emerge.

5) Even worse, according to the official version, the massacre took place because of an ambush prepared by the peasants. As for the 7 extrajudicial executions of peasants (out of a total of 10 murdered peasants), they were considered as acts of “self defense” from the police. On the other hand, eleven peasants are on trial for the deaths of six policemen.

6) Brazilian denounce health and education cuts to the OAS http://www.nodal.am/2016/12/organizaciones-brasilenas-denuncian-recortes-en-salud-y-educacion-ante-la-oea/

7) Press statements from Delcy Rodríguez in the Casa Amarilla on the 9th of December 2016.

Translated from Spanish by Ricardo Vaz