Massacre of Black people by « democratic rebels » – Investig’Action had met the victims. 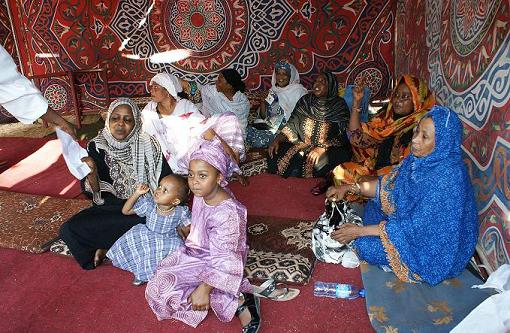 The Associated Press coldly announced the massacre of a group of Black people who were settled in a camp in front of the Libyan official residence. Dozens of dead bodies were found, hands tied behind their backs. The American news agency pointed out that these people were not combatants. Michel Collon and the delegation who went to Libya in July had met these men who loved Libya.

Michel Collon : « I have met these people while on mission in Tripoli. I talked with some of them. Contrary to what the media and the rebels proclaimed, they were in no way « mercenaries ». Some were black skinned Libyans – as a matter of fact, a major part of the population in Libya is composed of Black African people – the others were civilians who came from sub-Saharan African countries and who had been living in Libya for a long time. They all supported Gaddafi for the very reason that he opposed racism and treated Arabs and Africans as equals. Unlike the « rebels » of Benghazi, who are well-known for their anti-Black racism and who made themselves guilty of dreadful and systematic atrocities from the very first days of the war. What is paradoxical is that NATO says it wants to bring democracy but allies itself with a Libyan branch of Al Qaeda and with a group of KKK-like racists! »
All the team of Investig’Action is deeply distressed by this sad news.

Simon de Beer, a member of Investig’Action, in the camp.
Simon de Beer, a historian and member of Investig’Action :
« Thousands of Black African people live in Libya. I had the opportunity to talk with many of them, particularly in the Bab Al Aziziya camp. Most of them regard Gaddafi as one the fathers of Africa. They even compare him with Lumumba and Sankara. From an outsider point of view, it may seem incredible, but one has to bear in mind that in the poorest continent of the planet, Libya is an exception : the Libyan life expectancy is 75 years; water, electricity, health care and education are free; and filling up barely costs more than one euro…That is why millions of Africans heavily support Gaddafi. I was shocked to hear of the brutal death of those who, as a sign of solidarity, camped peacefully in front of Gaddafi’s residence. Their murder is a gratuitous act of barbarity.
How dare we still call the rebels « democratic forces » ?

Map indicating the Human Development Index in 2009, according to the United Nations. In Africa, Libya is the only country which level of development is close to the one of developed countries. For this reason, many African people emigrate in Libya in order to work and live there.

Mohamed Hassan, an observer of Africa, with an African leader. Read his interview about the mission in Tripoli.
Tony Busselen, a journalist for the weekly newspaper Solidaire, took part in the mission a few weeks ago :
« Our photos show that these people were unarmed civilians, there were even many women and children. I talked with them, they joined forces against the war and did not understand what Europe wanted.
They told me : « Libya is working well, the achievements are far better than in Africa, it is very good for us, and Europe is this country! It’s beyond understanding. » They were quite willing to defend Libya because they could compare it to their home country.
It is really barbarous to murder unarmed people, hands tied behind their backs, they were simply people, workers who came spontaneously to defend their new homeland. This is truly terrifying and I saw photographs showing the same deeds committed in Benghazi by the « rebels » who are clearly using terror. So, when I see people in Tripoli « applauding » the rebels, I believe that they are simply terrorized. NATO is bringing dread.

Where are these women and children now?
Ilse Grieten : « I cannot believe these things when I see them. We had already heard of so many accounts of atrocities committed by the rebels, and they are the very ones whom we help and arm?! Again, I’m furious, everyday! These people are so decent, hundreds of them representing so many African countries, they all had been standing inside and around their tents for months, convinced that they must support Gaddafi and Libya as a model for Africa. I can still hear them say : « Libya is the mother of Africa. » They clearly showed us what African unity was. They all wanted to speak to make us understand that this was simply an attack against Africa and its raw materials. Libya is the gate to Africa. I hope their voice will be heard at last. Why did NATO and the rebels refuse the peace proposal of the African Union (53 countries)? Why haven’t we heard about it until now? For them, Gaddafi is the symbol of African unity, the man who protects his own plundering against neocolonial plundering. The man who did more for Africa than any of its own leaders. »
Soon we will publish the testimony of these men and women.
Screenshot of a Reuters video, which dare say they do not know who committed this massacre yet.

The following pictures were found on the Facebook profile of supporters of the NTC (the National Transitional Council of Libya). The places and dates can hardly be definable. But what is sure is that the men who were arrested are not combatants but are threatened, if not already murdered as these pictures are being published. All this thanks to the UN, NATO, the members of the European parliament and their evil special correspondent – Bernard-Henri Levy – on the pretence of protecting the populations and establishing democracy.

How could you hold a weapon with one arm in plaster?

« Cornered in the Eastern gate, the last followers of the Guide take off their uniforms, get dressed in plain clothes and vanish in Tripoli. Some are arrested, among whom are African mercenaries. »