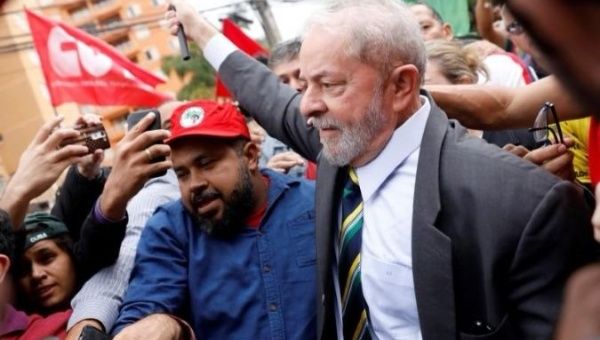 The life of Lula has been a life of struggles against injustice. Now he is the victim of the greatest injustice committed against a political leader in Brazil.

Afterwards, Lula continued to be a victim of injustice, as a shoe-shiner, messenger boy, among other jobs, as a Northeastern child object of discrimination against in São Paulo.

He took a course and became a machine operator, moving on to become the victim of the injustice of the exploitation of workers, a situation that meant he lost a finger in the machine.

When he founded the Workers’ Party (PT) and launched his candidacy for the presidency of Brazil, Lula committed to struggle against all of the injustices that victimize all Brazilians. When he became President of Brazil, he went on to combat these injustices and launched ideas for fighting against injustice in the whole world.

Now Lula has become the victim of the greatest injustice against a political leader in Brazil. Victim of a spurious trial, without a crime and without evidence, based on the conviction of a partial judge, supported by a ridiculous power point, condemned by judges who have acted collectively to forge a persecution, of a clearly political character, against Lula.

People focused on the details, thinking of insignificant names such as [high court judges] Carmen Lucia, Rosa Weber, Barroso, looking at the trees rather than the forest, leaving aside the gigantic dimensions of the injustice committed against Lula, the result of the most odious political persecution.

All this in contrast with Lula’s moral and political greatness, in addition to his support from the masses, of the proof that his love is corresponded by the Brazilian people. The way that he faces the injustice of which he is the victim, the lies told about him, the campaigns of defamation, reveal in entirety Lula’s character. At no time, even in the days between the negative decision against his habeas corpus in the STF (Supreme Court), to the day on which he decided to hand himself in, have his high spirits changed. It was always he who kept people’s spirits up, radiating confidence that this obstacle could be overcome, so that discouragement and the despair would not dishearten them.

Lula did not want to hand himself in. The extraordinary popular mobilization in the metallurgists’ union in the region of ABC has strengthened this position. The decisive factor that changed his plans was the possibility that judge Sergio Moro would decree preventative imprisonment for Lula, from the day and hour defined for his presentation. In that case, Lula would have lost the possibilities of requesting habeas corpus, the STF itself would lose any possibility of intervention, leaving Lula without defense against Moro.

From this situation, negotiations developed for the presentation of Lula to the justice system. He had already refused to do so on the day, hour and place defined by Moro, appealing to the great mobilization around the union building. At the same time, the impact of the arbitrary decision of the STF (denying the habeas corpus) has strengthened the version that Lula is effectively the victim of political persecution, that the accusations against him were without basis, that he would become a political prisoner. In addition to which, with the hasty decision of Moro, it was fully established that the risks of prison alleged in the petition of the habeas corpus were fully justified, increasing the possibilities that Lula will now be able to get a habeas corpus. In addition, there is greater possibility of a decision favourable to the re-establishment of the constitutional right for the presumption of innocence, the discussion of which is on the agenda of the STF for the coming week.

Thus, there is a positive expectation that Lula could recover his freedom in a relatively short time. In this case, his image, that today catalyzes the erosion of a rotten system, without legitimacy, would be further strengthened. Moreover, during the time he is in prison, there will be many mobilizations of support, visits from great Brazilian personalities and from other countries, making the detention of Lula a much greater problem for those who detain him than for Lula himself.

No political leader who has occupied the most important national and international spaces, such as Lula, could fly to his trade union of origin and be received in such an extraordinary way, revealing that Lula was faithful to his origins.

Never before as in these times, had the image of Lula been projected in such an extraordinary way across the whole country.

Never has the radiance of a political leader been so bright, as the light that Lula projects in these days. In his farewell discourse, before presenting himself to justice, he took up the political history of his life, recalling that it was in this union that he began in politics and established himself as a leader. And he finished by recalling that “ideas cannot be imprisoned”.

The destiny of Brazil continues to be dependent on Lula, who accepts the most difficult challenge of his life, on which the future of Brazil will depend and, in part, that of Latin America itself. Now the challenge is to overcome the monstrous injustice that is being done against him, to return to combat the injustices that are made against all Brazilians.

Emir Sader, Brazilian sociologist and political scientist, is the Coordinator of the Laboratory of Public Policy of the State University of Rio de Janeiro (UERJ.

[1] TN: The North East is the poorest area of Brazil

Translated for ALAI by Jordan Bishop