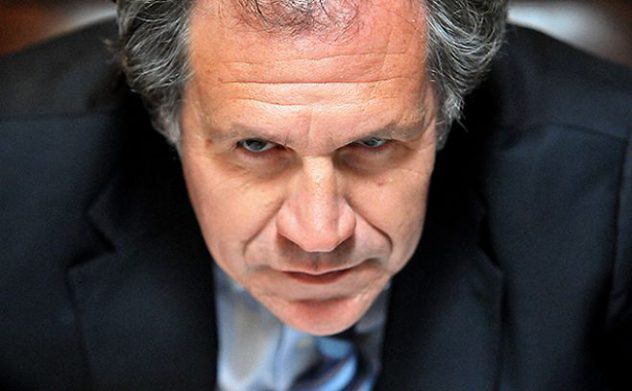 With a brutality that would make even Cambodia’s Pol Pot blush, Venezuela’s dictator-in-chief, Nicolas Maduro, continues his onslaught against the Venezuelan people, enforcing mass starvation on the defenseless population. Or such is the alternative reality that Organization of American States (OAS) General Sectary Luis Almagro has conjured up for himself.

In a recent op-ed in The New York Times, the former Uruguayan diplomat presents Venezuela with an ultimatum: hold snap presidential elections one year ahead of schedule or face expulsion from the OAS under Article 21 of the Inter-American Democratic Charter.

To justify this radical demand against a sovereign nation, Almagro enumerates a laundry list of alleged dictatorial crimes ranging from a botched recall referendum and so-called “political prisoners” to food shortages and corruption.

It’s of course no coincidence that this litany of abuses reads like a pamphlet drafted by Venezuelan hard right political party Popular Will (VP). Over the past year, Almagro has met with Venezuelan opposition leaders no less than 26 times, repeatedly using the OAS as a platform to promote the partisan discourse of VP and other right-wing parties in blatant violation of the body’s own internal norms prohibiting the politicized use of “the facilities of the OAS”.

Sadly, as with most propaganda, Mr. Almagro’s editorial is characteristically high on hyperbole and low on facts.

The secretary general reprimands Venezuela for failing to hold a recall referendum against President Nicolas Maduro last year without at all referencing the country’s constitutional norms and internal laws governing said process. Almagro conveniently omits any mention of the opposition coalition’s own infighting that delayed the start of the complex procedure nor does he address the 53,658 fraudulent signatures that ultimately stalled the referendum in court.

Rather, the OAS chief insists on holding the Maduro government to an abstract, fantastical standard of democracy, condemning it for not convening a recall referendum despite the fact that Venezuela is the only country in the hemisphere besides Ecuador with such a participatory democratic mechanism.

This highly skewed narrative runs throughout the remainder of the piece.

He lambasts Venezuela’s Supreme Court for curtailing the powers of the opposition-controlled legislature without acknowledging that Parliament has shown more interest in ousting Maduro via constitutionally dubious means than in actually governing the country.

The same goes for “political prisoners”. Nowhere does Mr. Almagro mention the violent 2014 opposition protests, which had as their explicit objective the “exit” of democratically elected Maduro, leaving 43 dead. In any other country, such levels of anti-government violence would be met with swift state repression endorsed by the international media and multilateral bodies.

None of this is to deny, however, the severity of Venezuela’s current economic crisis nor the inadequacy of the Maduro government’s response.

In the face of stagnant global oil prices – the source of over 90 percent of Venezuela’s export earnings – and what effectively amounts to an international financial blockade, the government has been forced to dramatically slash imports, leading to shortages of crucial food items and medicines.

That is, while the Maduro administration must be criticized for failing to take the radical measures needed to resolve this crisis in a revolutionary direction, other decisive factors must be taken into account. These include the intransigence international lenders and a capital strike that has seen firms ranging from transnational food company Polar to local bakeries refusing to produce despite receiving government dollars.

Sadly, Almagro opportunistically conflates these complex but real economic problems with largely contrived indictments of Venezuelan democracy in order to bolster his case for regime change.

While Mr. Almagro is more than justified in highlighting Venezuela’s longstanding problems with its penal system, corruption, and separation of powers, what is striking is the OAS head’s refusal to apply this same proceduralist standard of democracy to other countries in the region.

The former Uruguayan foreign minister is quick to brand Venezuela a dictatorship for not holding a recall referendum, yet his silence is deafening vis-à-vis the Temer regime in Brazil, which came to power via a parliamentary coup that ousted democratically elected Dilma Rousseff last May. Almost a year later, its national government continues to be unelected.

Almagro likewise excoriates Venezuela regarding its “more than 100” alleged “political prisoners” – many of whom like Leopoldo Lopez have been convicted of inciting the violent overthrow of the government – but in no moment does he threaten to revoke Colombia’s democratic credentials over its several hundred actual political prisoners, many of whom have been on intermittent hunger strike.

While the general secretary denounces arbitrary detention and torture on the part of Venezuelan security forces, he seems entirely unconcerned about the escalating wave of paramilitary violence in Colombia that has claimed the lives of 23 community leaders during just three months of peace with the FARC. Nor does he speak out about the ongoing dirty war against social movements in Honduras, which has recently been labeled the “deadliest country in the world for environmental activism”.

Almagro goes on to decry corruption and drug trafficking in Venezuela, but at no time does he call for fresh elections in Mexico where President Enrique Peña Nieto – whose popularity is even lower than Nicolas Maduro’s – presides over a brutally repressive US-backed narco-state engaged in a decade-long war on drugs that has left over 100,000 dead and 30,000 missing.

Is this silence merely an unfortunate coincidence or is there a pattern in this selective democratic sensibility?

It should surprise no one that Brazil, Colombia, Honduras, and Mexico – together with the majority of the other signatories of a recent US-led statement demanding early elections in Venezuela – are all close allies of Washington governed by right-wing neoliberal administrations.

Like his fellow pro-US elites in these countries, Almagro knows all too well who maintains him in his position of power. As such, the secretary general’s urgent preoccupation with Venezuela is hardly as innocent and impartial as it seems.

Lurking behind his discourse of human rights and democracy is in fact the same Cold War-era ideological litmus test that has for decades whitewashed US-backed coups and state terror, all the while demonizing elected socialist governments no matter their democratic mandate.

From Chile and Nicaragua in the ‘70s and ‘80s to Venezuela and Bolivia today, democratic socialist experiments are routinely targeted for regime change by Washington, whereas brutal authoritarian regimes are embraced so long as they faithfully execute their orders from the hegemon.

Tragically, Mr. Almagro – whose election as OAS chief was heralded as a break from the organization’s long subservience to US geopolitical interests – has faithfully fulfilled this historical role far more efficiently than his predecessors.

Yet Latin America has changed over the past two decades, and despite the current rightward regional counteroffensive, the continent is no longer the idle playground of US imperialism, as even Barack Obama himself admitted.

Indeed the OAS head’s current bid to invoke the Democratic Charter against Venezuela has received even less support than his previous attempt last June, with even staunch critics of the Bolivarian Revolution such as Peru casting doubt on the initiative’s success.

At the end of the day, the reality is that the decline of US hegemony in the region is now irreversible, notwithstanding the Obama administration’s efforts over the previous eight years to tug back lost territory, from Honduras in 2009 to Brazil last year. Trump’s 28 percent cut to the State Department budget, which will in turn affect US contributions to the OAS, is yet one more indication of this overall trend.

The truth is that the majority of Latin American and Caribbean peoples – regardless of whether Mr. Almagro and his US backers like it or not – are for the first time in 500 years in a position to chart their own path, independent of the dictates of Madrid, Paris, London, or Washington.

Whether this new collective self-determination, or Bolivarian consensus, will lead to authentic liberation, only time will tell.

The semantics of intervention: dismantling the Almagro report – a special analysis