Lessons from Vietnam for Ukraine 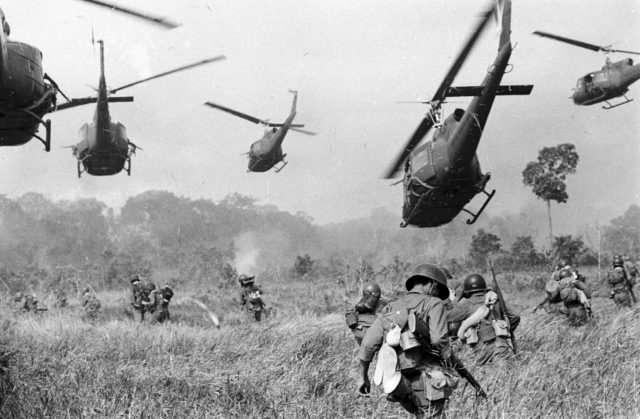 In April 1965, U.S. President Lyndon Baines Johnson (LBJ) explained why he was escalating US involvement in Vietnam. With an Orwellian touch, LBJ titled the speech “Peace without Conquest” as he announced the beginning of US air attacks on Vietnam. He explained that “We must fight if we are to live in a world where every country can shape its own destiny and only in such a world will our own freedom be secure… we have made a national pledge to help South Vietnam defend its independence and I intend to keep that promise. To dishonor that pledge, to abandon the small and brave nation to its enemies and the terror must follow would be an unforgivable wrong.”

Johnson further explained, “We are also there to strengthen world order… To leave Vietnam to its fate would shake the confidence of all these people in the value of an American commitment and in the value of America’s words.”

Learning no lessons from the failure and mass slaughter of the Korean War in the previous decade, the US military commenced widespread bombing of Vietnam and sent hundreds of thousands of soldiers.

At the time, spring 1965, about 400 US soldiers had died in the conflict. The war was not yet widely unpopular. Americans who protested against the Vietnam War were a small minority. It would be two years before Martin Luther King’s famous denunciation of the war.

Years later, after hundreds of thousands had been drafted into the military with the deaths of tens of thousands, the war became widely unpopular. Ultimately, over 58,000 Americans and three million Vietnamese civilians and soldiers died in the war. The cost in human lives and wasted resources was immense. The “Great Society” that LBJ hoped to build was stopped by the diversion of human lives, energy and resources into the Vietnam War.

There are similarities today with the US and NATO pouring tens of BILLIONS of dollars in weapons into Ukraine to counter the Russian military intervention. The US and western allies are providing additional support in intelligence and military advice. While there are not yet official US troops (as there were not in Vietnam for the first years), there are special operations and much other military support.

President Biden and administration leaders sound similar to LBJ in the early stage of the Vietnam War. In his remarks to Congress asking for additional funding for Ukraine, Biden said, “We need this bill to support Ukraine in its fight for freedom…. The cost of this fight is not cheap, but caving to aggression is going to be more costly if we allow it to happen.” Making clear that the US goal is not just the “freedom” of Ukraine, Biden continues, “Investing in Ukraine’s freedom and security is a small price to pay to punish Russian aggression, to lessen the risk of future conflicts.”

In both Vietnam and Ukraine, the US installed or promoted pro-US governments to counter “adversary” nations. In the 1950’s, the US prevented a nation-wide referendum in Vietnam which would have united the country without a war. In 2014, the US was instrumental in promoting the Ukraine coup which overthrew a democratically elected government leading to the secession of Crimea and civil war in eastern Ukraine. While most in the West think the Ukraine conflict began in February this year, it actually began in February 2014. The 2016 documentary “Ukraine on Fire”, banned by YouTube, describes the coup.

Western media portrayed the US and South Vietnam winning the war in South East Asia until the 1968 Tet offensive exposed the lies and reality. Similarly, western media portrays Ukrainians winning the war midst overwhelming Ukrainian public support. In reality, Russia and the secessionist Donetsk Peoples Republic (DPR) and Lugansk Peoples Republic (LPR) have steadily taken control of south east Ukraine. Meanwhile, Ukrainian president Zelensky has overseen the the imprisonment, torture and killing of opponents. The largest opposition party has been banned. Many Ukrainians oppose his policy and continuation of the war. There are rumors of presidential assassination attempts, just as there were in South Vietnam.

Ukrainians have become cannon fodder for the US geopolitical goals, just as the South Vietnamese were.

It is now clear that the LBJ’s escalation in 1965 was a huge and costly mistake. The needless war did immense damage to Vietnam, Cambodia and Laos. It is also had enormous negative ramifications in the United States.

Will the US and allies continue to escalate the conflict in Ukraine, to “double down” on an intervention half way around the world with the goal of hurting Russia? Have we learned nothing from Vietnam and subsequent US/Western foreign policy disasters of the past 40 years?

Rick Sterling is an independent journalist based in the SF Bay Area. He can be reached at rsterling1@gmail.com