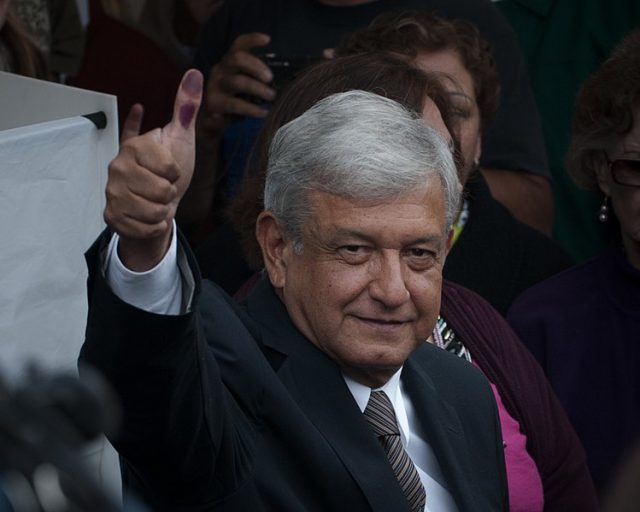 Mexico’s white-knuckled presidential race has effectively ended a month before elections have even been held, and for the first time in generations a leftist candidate has won – at least according to the polls.

Last week, Spanish newspaper El País predicted leftist candidate Andrés Manuel López Obrador(AMLO for short) has a 92 percent chance of taking the presidency on July 1. This prediction is no idle speculation: based on a collection of 16 prominent opinion polls, El País ran 20,000 data-driven simulated elections – almost none of which turned out well for AMLO’s rivals.

Right-wing PAN candidate Ricardo Anaya has a 7 percent chance of winning, while the odds for the ruling PRI’s José Antonio Meade are at a seemingly hopeless 1 percent. This data lines up fairly well with separate findings from Reuters, Reforma, and Bloomberg.

Since El País published its findings, Mexico’s elite appear to have likewise accepted this reality. Business leaders have lined up to meet with AMLO, while even opposition candidates are increasingly turning to defeatist rhetoric.

Of course, not everyone is aboard the AMLO train. Some of Mexico’s largest employers have been accused of pressuring workers to shun AMLO and his Morena movement. Among these businesses is supermarket chain Chedraui, which has displayed election material warning against “populism,” and making references to Cuba and Venezuela.

Indeed, AMLO has long been tarred as nothing more than a wannabe Hugo Chávez, the late leftist former president of Venezuela. Since the dawn of the Chávez-era, Venezuela/US relations have remained stubbornly sour. Relations hit a low point in 2002 when the Bush administration supported a short-lived coup against Chávez, and relations have never truly recovered since.

Of course, in reality AMLO is no Chavez, and Mexico isn’t Venezuela. In fact, an AMLO presidency will probably affect Americans more than Chávez ever could, simply because Mexico is so closely integrated into North American politics and economics. Here are five ways AMLO will likely impact the US, for the better or worse.

1. More Diplomatic Isolation for the US

The Trump era has already been characterized by increased diplomatic isolation, and AMLO will probably only add to this. This is especially true at the Organization of American States (OAS), where the US has found itself largely isolated in recent years. At the OAS, Mexican diplomats are routinely used by Washington as proxies for US foreign policy in the region. Even when most of Latin America is opposed to US proposals, Mexico has almost always remained loyal. This is extremely important in terms of optics and narrative-setting, allowing the US to hide its own geopolitical priorities behind a [email protected] face. Odds are, AMLO is unlikely to play ball here, leaving the US more isolated ever.

Protectionism is back. Last Wednesday, Mexico responded to new US tariffs by imposing their own tariffs on US goods. These included tariffs of 15-25 percent on US products such as pork, apples, bourbon, cheese, potatoes and some steel products. These tariffs affect barely 1 percent of US exports to Mexico, but still represent significant blows to individual industries. Take Mexican demand for pork, for example, which in 2017 accounted for a quarter of all US pork exports worldwide.

“A 20 percent tariff eliminates our ability to compete effectively in Mexico,” the president of the US National Pork Producers Council Jim Heimerl recently told CNN. He added, “This is devastating to my family and pork producing families across the United States.”

Unless the US pork industry can find an alternative export market to soak up the inevitable drop in Mexican demand, American consumers can expect to see the price of a bacon breakfast drop in the coming months. The more tariffs President Donald Trump throws up, then the more US products could potentially become cheaper stateside – at least in the short to medium term.

Of course, in the long run Trump’s unwinnable trade war will likely prove disastrous for ordinary Americans while doing nothing to address the real causes of the US trade deficit, let alone the broader structural issues with modern trade agreements.

For their part, AMLO’s team has indicated they are not only anti-protectionist, but also supportive of a reformed NAFTA. Despite this, they’ve signaled they intend to negotiate harder on NAFTA than the current Mexican government of Enrique Peña Nieto, so there’s no reason to assume we’ve seen the last Trump tariff. Speaking of which…

3. Some Surprising Agreement on NAFTA

Turning to the elephant in the room, it’s worth noting that Trump and AMLO actually agree on NAFTA’s biggest problem: the outsourcing of US jobs to poorly paid Mexican workers. In principle, Trump wants more American jobs, while AMLO wants higher wages for Mexicans. These points of view could imaginably be made compatible simply by reforming NAFTA with some half-decent labor protections. Both AMLO and Canada’s Prime Minister Justin Trudeau have already expressed support for such a proposal.

There’s little reason to be confident that NAFTA can realistically make the transition from a free to a fair trade deal, but that’s beside the point. If (or perhaps when) NAFTA falls, it won’t be because of Mexican stubbornness; it’ll be because major corporations didn’t want to pay their Mexican workers dignified wages.

Morena’s policy platform has received plenty of criticism for its lack of practical detail in some areas, but when it comes to poverty alleviation AMLO does have a number of very clear proposals.

Some such proposals include doubling retirement pensions, new living allowances for low income college students worth MXN$2,400 a month, a paid apprenticeship program where young Mexicans can learn a trade while earning MXN$3,600 a month, a commitment to increase the minimum wage by 15.6 percent annually, a rural development initiative and an MX$45 billion (US$2.4 billion) reconstruction plan for communities still struggling after last year’s devastating earthquakes.

All of these proposals are aimed at creating jobs, especially for low-skilled workers. Accessible jobs in Mexico means fewer Mexicans heading northwards for work. Obviously, this will harm the US agricultural sector, which is heavily dependent on Mexican seasonal workers. On the other hand, if Trump wants to halt Mexican migration, particularly undocumented migration, then AMLO’s policies would lend a hand, economically enabling more Mexicans to remain in Mexico.

5. If AMLO Succeeds, Expect US Aggression

One fact that hasn’t received much discussion is this: almost every Latin American country that has pursued socialist or social democratic-style development has been targeted by US aggression and interference.

In the past, this aggression has come in the form of covert funding for opposition groups, economic pressure, sponsorship of terrorism and outright coups. There’s no reason to assume even a moderate AMLO presidency will be immune from this. Unless Morena’s vision for Mexico fails miserably, both Americans and Mexicans need to be prepared for a new wave of US interventionism.

The most likely flashpoint would be any attempts by AMLO to renegotiate concessions to foreign oil companies under Mexico’s controversial energy reform. As leaked cables published by Wikileaks clearly demonstrate, the US Department of State is secretly obsessed with cracking down on any form of energy independence in Latin America, and is more than willing to topple governments to get their way.

Even former senior officials from USAID are quite comfortable openly advocating for military coups to overthrow governments that don’t comply with Washington. In this sense, AMLO really could be steering Mexico into dangerous waters, especially if he prioritizes justice for Mexico over profits for multinationals.

Ryan Mallett-Outtrim is an independent journalist based out of Mexico. More of his work can be found at dissentsansfrontieres.com.