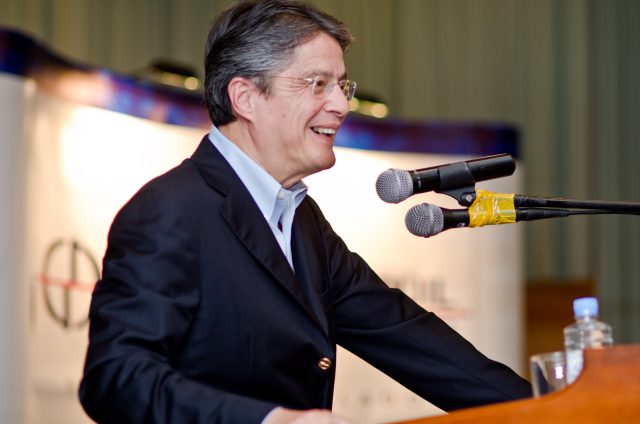 Paramilitarism flourished in Colombia after the expansion of the private security model — which Ecuador’s Guillermo Lasso promotes.

The proposal to privatize security forces in Ecuador put forward by right-wing presidential candidate Guillermo Lasso is the same model that spurred a major surge in paramilitary violence in Colombia more than two decades ago, according to a Colombian analyst.

Daniela Pacheco, a Colombian specialist on development projects, argued in a recent piece on the Ecuadorean platform La Junta that shifting issues of security into private hands ultimately undermines public safety by pandering to the whims of political and economic elites, as has happened in Colombia.

“We are evidently facing a proposal that seeks to establish a social control mechanism, through a false idea of strengthening of democracy,” said Pacheco in an interview with teleSUR.

In Colombia, the private security model took off with the approval the 1994 national law, known as Decree 356, that created a series of private surveillance and security cooperatives called Convivir that offered special services where public forces were deemed in need of reinforcement.

The law was promoted by far-right politician Alvaro Uribe, accused of paramilitary ties and the most virulent critic of the country’s peace deal with rebels of the Revolutionary Armed Forced of Colombia, FARC.

According to a 2009 WikiLeaks document release report, the Convivir groups became controversial nationwide due to “human rights abuses, a reputation of secrecy, and a perceived unaccountability to civilian authorities.” They were believed to have served as illegal paramilitary groups, and at least four of these groups have been linked to massacres during the period that former President Alvaro Uribe was governor of the department of Antioquia.

Under Convivir’s broad reach, more than 400 organizations worked with some 120,000 people across the country, according to the Inter-American Court of Human Rights. The groups received financing and weapons and, as Pacheco reported, committed multiple crimes against the population.

“The legally constituted private security services transformed into murderous armies at the service of elites, multinationals and drug traffickers, that stomps on campesinos accused of being alleged guerrilla members, social leaders, union leaders, and leftist politicians, for political, economic and territorial control in strategic areas of the country,” she wrote.

In light of Colombia’s bloody past and present under the scourge of paramilitaries, Lasso’s proposals for similar policies in Ecuador have raised alarms. The former banker has said that “security must be strengthened to coordinate actions between the National Police and private security companies (to) let them act with more freedom and more professionalism.”

“Private security will not be excluded and we will strengthen it so that it works in coordination with the police and Armed Forces,” he said on another occasion.

He even told campesinos during the campaign ahead of the first round of the presidential election that he will give them weapons so they can “defend their wives and families as men.”

Although Lasso’s security agenda proposes a stark shift from current policies, the presence of parallel security forces is not a new concept in Ecuador. The government of Leon Febres Cordero in 1984 created the so-called “flying squads” to combat political dissidents, targeting in particular leftist organizations and political parties.

“Let’s remember that security in the hands of private entities has worked as an instrument of coercion and repression in Latin America, with the only objective of maintaining the status quo of economic and political domination of the elites,” Pacheco told teleSUR.

For Pacheco, Lasso’s proposals to privatize security services, if implemented, would ultimately legitimize violence as a tool of social control. Facing such a threat, his neoliberal platform should be cause for alarm among Ecuadorean voters.

“Definitely, the only guarantors of their rights are Ecuadoreans themselves,” she said. “Paramilitarism wouldn’t have prospered without a social legitimation of their actions.”

But if Lasso wins the presidential race — which recent polls suggest won’t happen — the saving grace, Pacheco argued, would be that as president he would face strong opposition in the National Assembly, led by the ruling left-wing Alianza Pais party, as well as a public outrage over his plan to privatize education and health services.

Elections in Ecuador could mean progress for the people