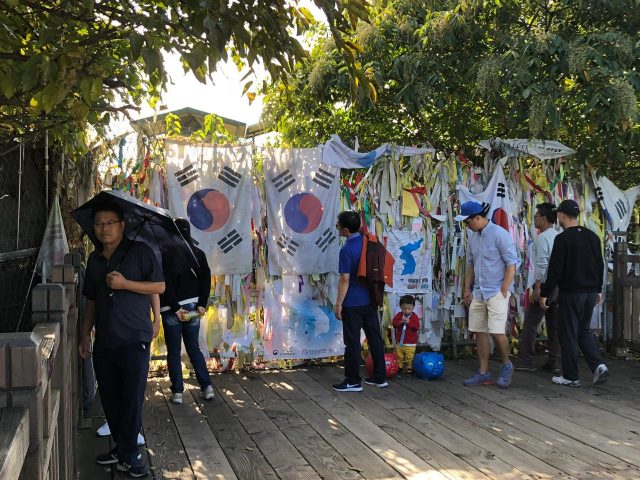 It is strange that when you come from the south, near the DMZ (De-militarized zone, which divides Korea into two parts), you will see many flags and sentimental ‘peace’ slogans, but nothing that would represent the points of view of the North Korean people. All the flags are those of ROK (Republic of Korea, otherwise known as South Korea).

Many people near the division line have turned this entire area into a tourist trap, with observation towers ‘to get a glimpse of North Korea’, with stores selling ROK and US military ‘souvenirs’, even old military gear. As if North Koreans were some rare animals living in a cage, fascinating to study and to observe, but dangerous to touch.

Yes, all flags here are those of the ROK. Even if the two flags are crossed, in what should be a fraternal symbolic unison, they are always two identical ones – those of South Korea. This looks truly bizarre, but that’s how it is.

Something always seems to be desperately missing in this South Korean ‘strive for peace’ and for the re-united Korea. And what is missing is somehow totally basic: it is at least some essential symbolism from the north – the DPRK!

I know both parts of Korea – DPRK and ROK. And what worries me is that it looks as if the South thinks it can pull this entire ‘business of unification’ alone, without considering the needs and desires of the other side.

And the West takes it for granted that the North will be, eventually, simply swallowed by the South. Because it is used to get what it wants. Because in its fundamentalist zeal, it is not even capable of considering the sensitivities and goals of other political, philosophical and social systems.

The plan of both the West and South Korea is simple, although it is mostly never clearly defined, for ‘strategic reasons’: ‘Once the moment of potential unification arrives, the DPRK would simply cease to exist, as East Germany ceased to exist three decades ago. Right after that, the entire Korea would be run on capitalist principles, under the ‘patronage’ and diktat of the West.’

And both the people and the leadership of North Korea will just fall on their knees and surrender, after the masses break down the border fences with their bare hands. Ordinary people will happily renounce their system, as well as the several decades of determined struggle and sacrifice. Everything will be thrown to the altar of mighty South Korean corporations and the pro-Western regime. 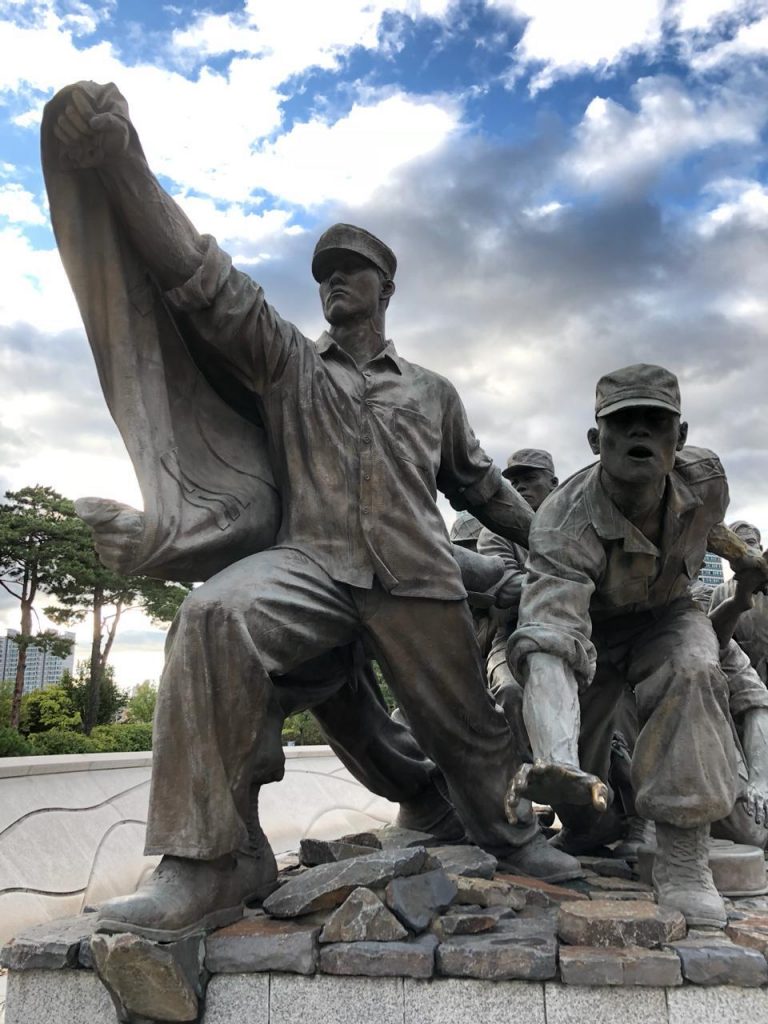 Korea is not Germany. And the second decade of the 21st century is very different from those bizarre, confused years when Gorbachev brilliantly demonstrated to the world how much damage one naïve and useful idiot could cause to his own country and the entire planet.

The truth is that North Korea will never disintegrate the way East Germany did for many reasons, one of them being that German history is very different: Germany was divided between 4 victorious powers after WWII. The Western part did not necessarily want to be capitalist and pro-Western (US and UK forged the post-war elections), and the East did not necessarily want to be in the Soviet orbit, either. Let’s be honest: the entire country was, just a bit earlier, running amok, shouting bizarre slogans and salivating under swastikas, maniacally admiring a murderous psychopath.

No, North Korea was not and is not East Germany! It was not ‘assigned’ to any bloc. It fought a tremendous battle for its own system; it lost millions of its people during the brutal war, or call it genocide, committed by the West. And in the end, after receiving fraternal help from China, it finally won.

Since the beginning, the DPRK was an internationalist country, very much like Cuba. Not yet fully recovered from horrific devastation, it helped to liberate great parts of Africa.

It always knew what it wanted, it fought for it and in the end it achieved many of its goals!

It never crumbled under sanctions and the combined propaganda of the ROK and its Western backers.

Even after the Soviet Bloc collapsed, it did not change its course.

It is an amazing country, no matter what some people think about its political system. And North Koreans are amazing people (I was privileged to film there, for my ‘poetic’ 25-minute film “Faces of North Korea”). They will not sell their ideals for bigger cars and a pair of designer jeans. Just like for Cuba, the North Korean motherland is not some commodity.

Then also imagine China and Russia, how ‘ecstatic’ both countries (increasingly under threat from the West) would be, if the entire Korea were to fall into North American hands. Imagine those military bases intimidating Herbin, Dalian, Beijing, Khabarovsk and Vladivostok!

South Korea suspects that the North will not yield.

They have tried everything: erecting enormous propaganda palaces like that infamous “War Museum” in Seoul.

They broadcasted their propaganda sermons via radio stations, even huge loudspeakers, placing them right near the division line. They joined efforts with the West, trying to isolate, even starve, their own sister in the north. Nothing helped.

ROK used to censor the press, disappear and murder its own dissidents, torture and rape political prisoners. All that, just in order to break any sympathy left for Communist ideals in the South. The South Korean campaign of terror was horrible, only comparable to those in South America under the right-wing dictatorships, and of course to that in post-1965 Indonesia.

Seoul never really apologized to the victims. Unlike in Taiwan, no monuments or museums were erected to the fatalities of the right-wing terror. 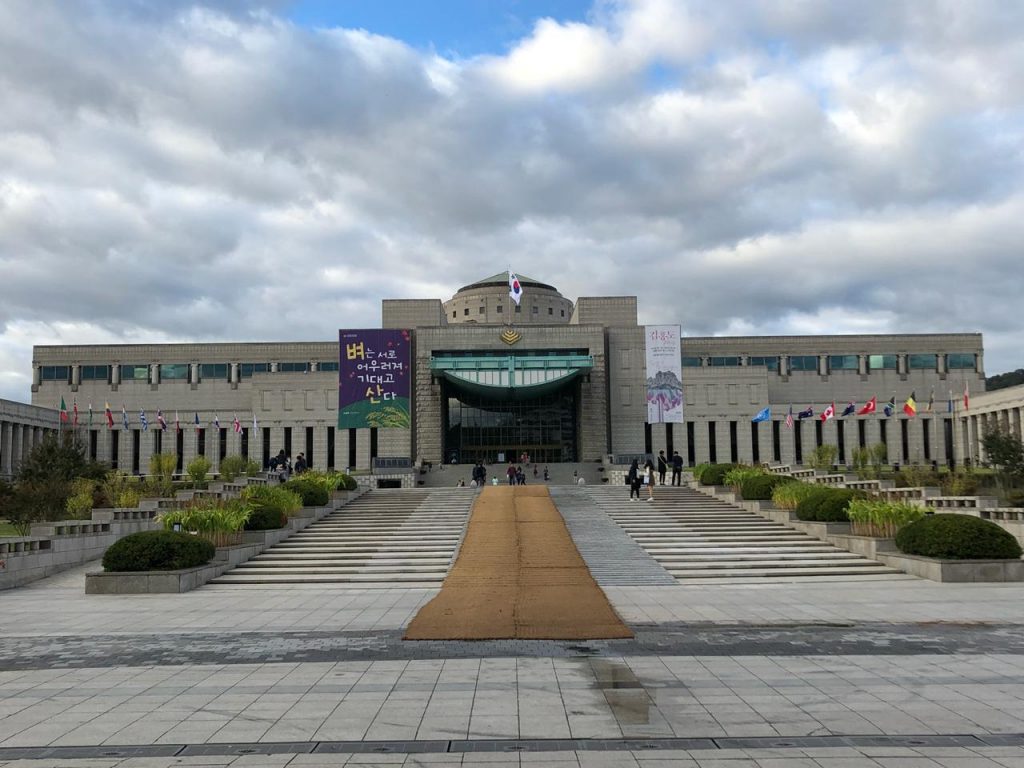 Trying to ‘soften’ the DPRK by sanctions, arms race, and intimidation, has not brought any fruits. And it never will. Just the opposite: North Korea managed to harden itself; to mobilize and learn to produce basically everything: from automobiles to rockets, from computers to cutting edge medical equipment and medicine.

The only way for the two parts of Korea to find a common language is to show to each other deep respect. The German scenario would not, and should never work here.

Both flags have to fly next to each other. Both political and economic systems have to be respected. When talking about unification, both ‘ways’ should be considered.

If South Korea were to ‘devour’ the North, nothing good would come from it: only more tension, discontent and possible confrontation. The North is a proud land. It has achieved plenty, alone. It has survived, against all the odds. It has helped oppressed parts of the world, honestly and generously. It has much to be proud of. Therefore, it will never surrender.

Yet, Korea is one nation and it is longing for unity. It will get it, but first: the ‘two sisters’, both beautiful, both brilliant, both very different, have to sit together and talk honestly and sincerely. They have done it before, and they will do it again. Both, together, are forming a family. But they cannot live together in one room. Not yet. In one house, yes, but in two different apartments.

And when they talk and try to build their home, again, there should be no interference from outside. They don’t need anybody to tell them what to do. They know, they will find a common language if left alone. It is all possible, and hopefully soon, it will happen. But not the ‘German way’; it will either happen the ‘Korean way’, or not at all.

Cover photo: Near DMZ between ROK and DPRK (Photo by Andre Vltchek)