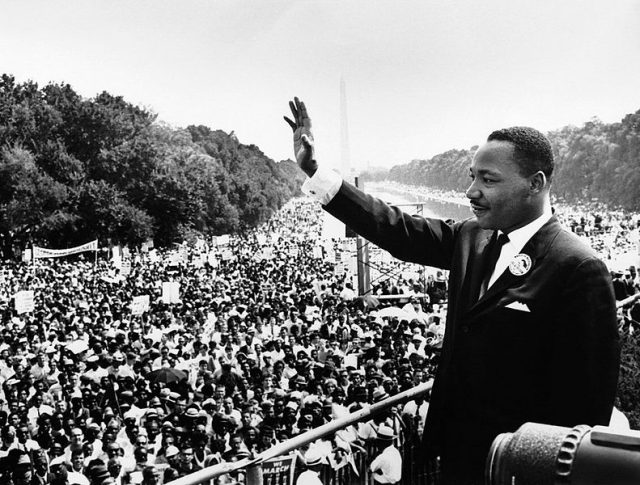 The legacy of Martin Luther King, Jr., who was assassinated 50 years ago today, has been cynically exploited by corporate and political leaders who care more for the needs of their rich donors than black constituents, comments Margaret Kimberley.

Dr. Martin Luther King, Jr. was the preeminent leader of the black liberation movement in the 1950s and 1960s. Millions of people engaged in the struggle against America’s shameful apartheid system but King was the most influential. His actions are remembered, his words are quoted by activists, politicians, and pundits. His birthday is a national holiday. Only the worst and most retrograde racists dare to speak ill of King.

But the lionizing is mostly a sham. In fact there are very few people who remember the importance of what King said, what he did or why and how they should replicate his work. His legacy has been subverted and is now understood only by the most conscious students of history.

Nothing illustrated this state of affairs more clearly than the use of King’s words in a Ram truck commercial broadcast during the 2018 Super Bowl football championship. Viewers were told that Ram trucks are “built to serve.”

The commercial’s creators deliberately ignored the portion of the sermon in which King derided the influence of advertising. He even mentioned vehicle advertising specifically. He warned that “gentleman of massive verbal persuasion” can influence people to act against their own interests. “In order to make your neighbors envious you must drive this type of car.”

Corporate interests are not alone in pretending to honor King while actually attacking him. King’s legacy is severely diminished because it has been used by cynical individuals for corrupt purposes. As we commemorate the 50th anniversary of his assassination we see a nation that has moved backwards on nearly every front. Legalized discrimination was eliminated but powerful forces undermined progress and America in 2018 is devoid of the change that King fought to make real.

Much of the blame lies at the feet of the Democratic Party, who have an undeserved reputation for enacting progressive policies. In reality, Democrats actively targeted black people for joblessness, poverty, imprisonment and disenfranchisement. Democrats became the party of corporate interests and aligned themselves with every neoliberal initiative. They forsook the union movement, working hand in hand with finance capitalists to take living wage jobs out of the country. Bill Clinton oversaw the end of public assistance as a right, destroying what Franklin Roosevelt enacted 60 years earlier. He built on the work of Ronald Reagan and massively increased the prison population.

Barack Obama offered a “grand bargain” of austerity to Republicans and continued the George W. Bush policy of tax cuts for the wealthiest. The banks which created the 2008 financial collapse were rewarded with huge bailouts of public funds. Black people ended up losing the small bit of wealth they held before the crash and now lead only in the negative measurements of quality of life.

Democrats destroy public education through charter schools and refuse to raise the minimum wage even when they control Congress and have the power to act. They were never the party of peace and they are now most outspoken in encouraging an anti-Russian resumption of the Cold War and supporting imperialist interventions.

After the legislative victories of the 1960s black Americans were ignored, subjugated or co-opted. It is true that there are thousands of black elected officials, when in King’s day there were hardly any. But this political class is a traitorous one and works for its own benefit, its patrons in corporate America and the civil rights organizations that are subsidiaries of the Democratic Party. The black political class went along with every sordid deal that Jimmy Carter, Bill Clinton and Barack Obama pursued. Their positions are secure but the rest of black America is anything but.

A glaring example is the enormous increase in incarceration rates. When Martin Luther King was alive there were only 300,000 incarcerated Americans. There are now more than 2 million. The exponential increase is not coincidental. Mass incarceration was a direct reaction to the freedom movement. Segregation put black people under physical control and the system devised new ways to secure the same result when it ended.

Black men became the face of drug dealing, or deadbeat fatherhood or anything else that the press and politicians told white Americans to fear and hate. The ripple effect is terrible and damages family life, the ability to earn a living and even to vote. In 48 states felons either lose the franchise permanently or are prevented from voting until all supervision is lifted. In Florida alone 1.5 million people cannot vote because of past convictions. A recent court case declared this rule unconstitutional and if a November 2018 ballot measure passes they may have their voting rights restored. That will be a happy result but there are 5 million more Americans, disproportionately black, who elsewhere lose the ability to vote due to criminal convictions.

Until incarceration becomes a mass movement, political issue, the Voting Rights Act amounts to very little. Actually the act already amounts to little because the Supreme Court nullified its most important provisions requiring southern states to seek permission before changing voting rules. The Democrats are less concerned with getting out the vote than in making their wealthy patrons happy and protecting the Senate majority and federal judiciary they claim is so important.

Of course the Democrats are in a bind. They don’t want to get out the vote because that would mean fighting for the issues that the masses need addressed. The wishes of wealthy, corporate America don’t dovetail with those of working people. Fat cat funders don’t want an increased minimum wage. Getting out the vote would mean biting the hand that feeds. So the people be damned.

King began his fight for the particular needs of black people in a uniquely oppressive system. As years went by he also opposed the economic system itself and the war in Vietnam. In 2017 the Democrats, including most Congressional Black Caucus members, went alongwith Donald Trump’s request for a 10% increase of an already huge military budget. They will go through the pretense of complaining when that increase inevitably restricts federal spending for social needs, but they are connivers who hope we miss their charade.

The liberation movement succeeded against great odds. Most black people then as now lived in the southern states and could not vote. Yet their coordinated mass action won them the franchise anyway. That lesson must not be forgotten as the juggernaut of neoliberal plots threatens everyone.

Every major American city is undergoing an onslaught of gentrification which displaces millions of black people at the whim of finance capital. The politicians who will speak in praise of King today do nothing to stop them. In fact they depend upon their largesse to stay in office.

They do nothing to stop the continued terror of billionaire rule. Instead they assist the richest in grabbing more and more. Amazon CEO Jeff Bezos this year became the richest person on the planet. His plans for a new Amazon HQ could be funded entirely by his corporation. Instead cities across the country scramble to give away property and tax dollars to help fund the race to the bottom for workers.

Dr. Martin Luther King, Jr. should be remembered for his tremendous courage in speaking out against the power of money and the military industrial complex. The poseurs who go along to get along should be silent today. The past 50 years have been so tragic because the hard won victories were deliberately destroyed.

King inspired the people to fight for their needs. He did so when the New York Times and Washington Post vilified him. He spoke against the Vietnam war when his compatriots feared angering Lyndon Johnson. The mass action movement that he led forced LBJ to act when he didn’t want to. If politicians act on behalf of the people it is never because they have the right motives.

That is what we must remember about King. The admiration is hollow unless we do as he and millions of others did and commit ourselves to challenging the system. That will mean openly and loudly denouncing the people committed to destroying what they worked and died to achieve. The worst traitors are the most prominent and well respected. But the respect is undeserved and quite dangerous. The night before he was killed King spoke of getting to the promised land. That won’t happen until the scoundrels are named and opposed. Honoring King’s legacy demands that we do just that.

Margaret Kimberley is Editor and Senior Columnist at Black Agenda Report. Ms. Kimberley serves on the Administrative Committee of the United National Antiwar Coalition (UNAC), the Coordinating Committee of Black Alliance for Peace (BAP) and the Advisory Board of ExposeFacts.org. She is writing a book about racism and the American presidency. She is a graduate of Williams College and lives in New York City.